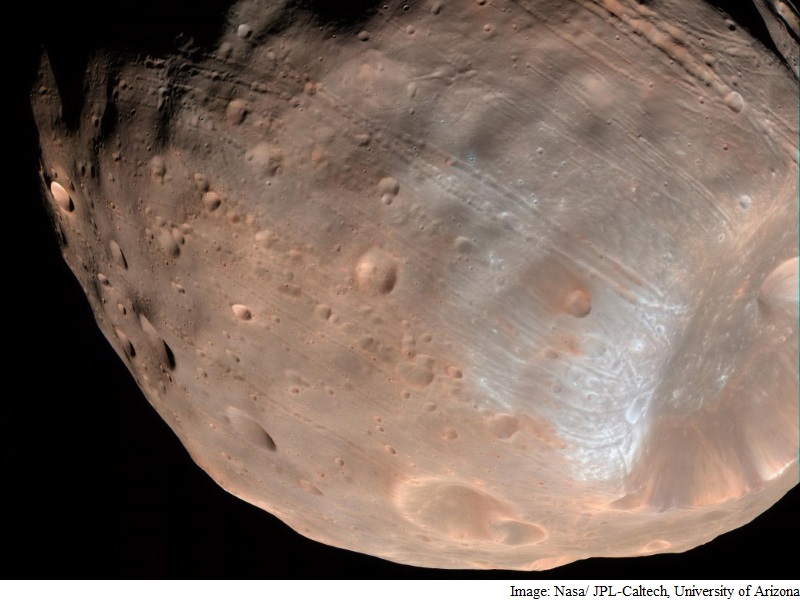 Earlier this month, scientists announced that Phobos - one of Mars' two moons - is probably falling apart. The planet's gravitational pull is causing the moon to shrink and stretch, and one day (as soon as 20 million years from now) the tug-of-war might end in Phobos' total annihilation.

But instead of ending their long, tumultuous relationship for good, this dramatic destruction may take Phobos and Mars to the next level: Phobos might just put a ring on it.

According to research published Monday in Nature Geoscience and led by Benjamin Black and Tushar Mittal of the University of California at Berkeley, Phobos could form Martian rings that last for 1 million to 100 million years. These rings will form quite quickly once the moon starts to crumble in earnest, according to these new predictions.

Errant moons have made rings around their planets before. In Saturn's case, it's likely that frequent collisions between its moons (there are 62 today, and there probably used to be more) and other space rocks created the necessary materials. Mars just has poor Phobos to work with, so the mass of its rings will be much smaller than those surrounding Saturn. But for a while, the rocky remains of Phobos will be so tightly packed around Mars that they'll have about the same density as Saturn's rings.

Let's pause for a second to imagine Mars with a ring. Mars with a ring. What would that even look like? We already know that Mars has evolved a lot in the past few billion years: It started out as a wet, warm planet, but our sun's violent stripping of its atmosphere has left it cold and barren.

Mars is a planet that we generally think of as dead - with its atmosphere basically gone and slipping away more every day, it's not going to suddenly become more suitable for life. But the new findings about Phobos are a reminder that not all planetary evolution has to revolve around increasing habitability. After eons as a muddy red pile of rocks, Mars could still get a major makeover. And that's really cool.

The researchers believe that this was probably a more common occurrence in the early days of our solar system, and that Phobos is simply the last moon left on a death spiral toward its host planet. By observing its progress, we could learn more about how moons helped shape the planets we see today.

Samsung Galaxy S7 Tipped to Reintroduce MicroSD Card Support
Fallout 4's First Patch Is Available. Here's How You Can Get It