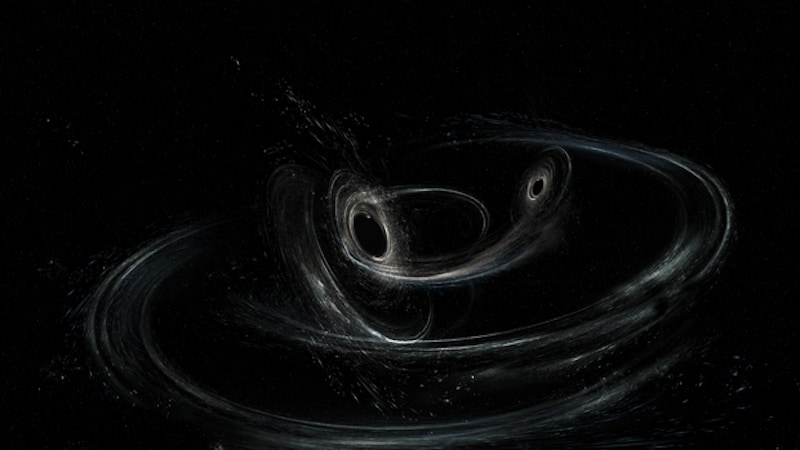 On January 4, an exquisitely sensitive instrument on Earth detected a disturbance that rippled through space and time. Scientists traced the ripple 3 billion light-years away, back to two ancient black holes on a collision course. This marked the third time in about a year that physicists, thanks to the Laser Interferometer Gravitational-wave Observatory, or LIGO, discovered gravitational waves from the violent death spirals of merging black holes.

The first gravitational wave discovery was announced in February 2016 and the second a few months later. The black holes identified in January were slightly smaller than those in the first detection, but they were much farther away, according to David Shoemaker, a research scientist at the Massachusetts Institute of Technology and spokesman for LIGO, an international collaboration involving more than a thousand researchers. They reported the details of the new binary black hole system that generated the wave Thursday in the journal Physical Review Letters.

"Gravitational waves are distortions in the metric of space that we live in," said Michael Landry, a LIGO physicist at California Institute of Technology, during a news conference on Wednesday. He used a metaphor of a painting's canvas to describe distorted space. If you grip the top and bottom of the canvas and pull, the picture warps, expanding on one axis while contracting in the other.

Two L-shaped LIGO detectors, one in Washington state and the other in Louisiana, check for these distortions. The shoot synchronized laser beams down perpendicular vacuum tubes, each 2.5 miles long. As a gravitational wave passes by, one arm of the L will shrink or expand, throwing the beams out of alignment. The Massachusetts Institute of Technology and California Institute of Technology spearhead the project, with support from the National Science Foundation and scientific agencies from a host of other countries.

"This is exactly what we hoped for from NSF's investment in LIGO: taking us deeper into time and space in ways we couldn't do before the detection of gravitational waves," said NSF director France Cordova in a statement.

The signal in January failed to set off the usual automated alarm - the LIGO scientists had just restarted the detector, after a short winter break, and hadn't yet properly calibrated the trigger setting at the Washington site. A researcher in Germany, who happened to be poring over the LIGO data, first spotted the wave. (The wave would have been caught eventually, the LIGO team said; in a worst-case scenario there's an offline backup to review.)

The scientists named it GW170104. The wave hit Washington about 3 milliseconds before Louisiana. Given the data captured, the LIGO team calculated that the chance an event like this would be a false alarm would occur once every 70,000 years.

"The key thing to take away is we're looking for novelty," Shoemaker said during Wednesday's briefing. On these terms, the new black holes complied, at least a little bit.

During this hole-on-hole merger, the equivalent of two solar masses were converted into gravitational waves. "These are the most powerful astronomical events witnessed by human beings," Landry said.

The new detection also offered hints about the ways black holes spin with respect to their orbits. Georgia Tech astrophysicist Laura Cadonati on Wednesday likened the spinning black holes to a pair of tornadoes that dance around each other. Black holes can spin counterclockwise and clockwise, like tornadoes, but can also tilt at angles tornadoes could never achieve.

"We opened a new window into the universe," Cadonati said. "Before our discoveries we didn't even know for sure that these black holes existed."

It is possible that one of the black holes had a misaligned spin, which is to say that it was not spinning in the same direction as its overall spiral orbit. "We have an indication that at least one of the two spins is not aligned with the orbital angular momentum," said B.S. Sathyaprakash, a cosmologist at Pennsylvania State University, during Wednesday's conference.

If the two black holes are not spinning in the same way, that hints at the way they met. Broadly speaking, there are two ways that binary black hole systems form: They began as an isolated pair of stars (think the dual Tatooine sunset in "Star Wars") that collapsed, or the black holes collapsed independently in a dense star cluster. Cadonati said "this finding lightly favors the theory" of a cluster of stars.

And once again, Albert Einstein's General Theory of Relativity held up. Einstein's theory indicates that gravitational waves do not disperse through a physical medium, unlike light through a prism.

"Even for this new event, which is about two times farther away than our first two detections, we could not find any evidence that gravitational waves disperse as they travel in the fabric of space-time," said Alessandra Buonanno, a University of Maryland physics professor and LIGO collaborator, in a statement.

The LIGO team continues to increase the detectors' sensitivity. In Louisiana, workers recently entered the vacuum envelope, clad in sterile bunny suits, to patch up areas where light could scatter in the tubes, cutting down on noise at low frequencies. In Washington, the observatory beefed up its laser to reduce high-frequency noise. With every improvement in clarity, LIGO can push its reach deeper into space.

The two teams will swap notes to improve their systems' range for the next run, scheduled to start in 2018. Italy's Virgo detector, too, is close to completion, which will join in LIGO's hunt for gravitational waves. It is possible, members of the LIGO team said during Wednesday's conference, that future discoveries could include merging neutron stars - collisions between the dense remnants of spent stars, the size of a city with the mass of a sun.