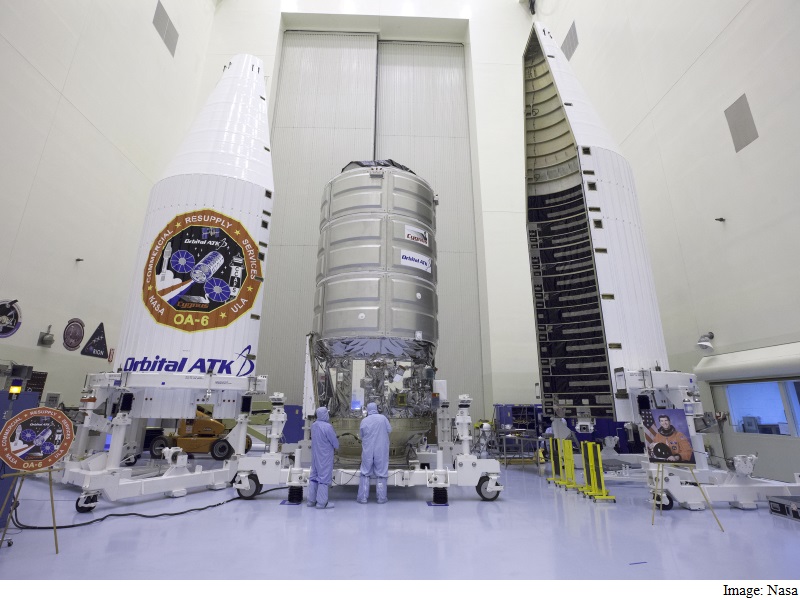 A space station supply ship is set to blast off Tuesday night with a commercial-quality 3D printer for astronaut as well as public use - for a price - and the makings for a large-scale fire.

Don't worry: The blaze is for scientific purposes only and won't ignite until the unmanned craft is clear of the International Space Station at mission's end. Nasa project manager Gary Ruff said this blaze will be second in size only to the 1997 fire on the Russian Mir space station, which was caused by a defective oxygen-generating canister.

Orbital ATK's capsule, named Cygnus after the swan constellation, holds nearly 8,000 pounds of station supplies for Nasa. One-fourth of that is scientific research, including robotic grippers inspired by the tiny, sticky hair on geckos' feet.

An Atlas rocket provided by United Launch Alliance will provide the ride from Cape Canaveral Air Force Station. Excellent weather is forecast for the 11:05 p.m. launch.

A look at some of the experiments bound for the space station and its six-man crew:

Fire on board
Nasa will deliberately set a fire inside the trash-packed Cygnus cargo ship, once it leaves the space station in May and is a safe distance away. Researchers want to understand how a fire spreads in weightlessness - how fast and how big does it get? The goal is to improve fire safety on future spacecraft. An electrical igniter will be used to light a yard-long cotton-fiberglass sheet inside a box. The burn should last 15 to 20 minutes, with a pair of cameras recording the flames and sensors making measurements. A week or so later, the capsule will burn up as planned over the Pacific. The test is called Saffire, short for Spacecraft Fire Experiment.

3D space prints, anyone?
This new 3D printer is an update to one launched to the space station in 2014. Northern California-based company Made In Space says the new printer is bigger and better. The first printer created items no bigger than an iPhone, this new printer will churn out items as big as an iPad mini. It will be controlled from the ground, with minimal input from the astronauts. The intention is to make 3-D items as needed for real-time use. But the company also is leasing the printer for groups interested in creating customized 3D items in space. Some of the items will be returned to Earth aboard SpaceX Dragon capsules, according to the company.

Meteor showers up close
A new camera will provide high-definition video of meteors entering Earth's atmosphere. It should be ready to go well before the Perseids meteor shower in August. Southwest Research Institute's Michael Fortenberry and his team want to analyze the chemical composition of incoming meteors. This is the third attempt to get the experiment to the space station; the first was destroyed in an Orbital launch explosion in 2014, the second in a SpaceX launch accident last June.

Slip-sliding away
A spacecraft landing on an asteroid will need to anchor itself to avoid floating away, given the exceedingly low gravity. The question is: Will the anchor stay put or yank free? Researchers hope to better understand the loose, gravelly asteroid surface with a Nasa experiment known as Strata. They've pulverized a hunk of meteorite discovered in Africa to simulate the surface material found on airless asteroids; 400 grams are on board. Silica glass shards also are making the trip, along with other materials stored in tubes, so researchers can see how they move around in weightlessness.

Gecko grippers
Some of nature's best grippers can be found on the feet of geckos. Researchers at Jet Propulsion Laboratory in Pasadena, California, have based their new mechanical spring-loaded grippers on the thousands of tiny sticky hairs found on geckos' feet. Five handheld grippers will be tested on the space station; one will remain on board an entire year. Researchers envision using these so-called Gecko Grippers for robots' hands and feet, allowing them to crawl around the outside of a spacecraft to perform inspections or repairs. The reusable grippers can be turned on and off, and adhere to multiple surfaces, making them ideal for future space station use, according to Nasa scientist Pete Hasbrook.

Number of US Government 'Cyber Incidents' Jumps in 2015: White House
iPhone SE: What You Don't Get When Compared to the iPhone 6s