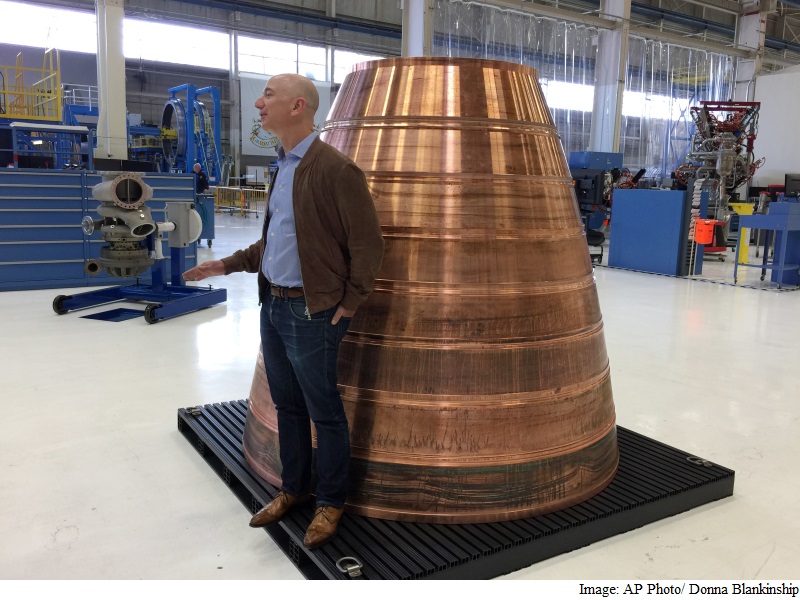 Those won't be paying customers, he said, but thousands have expressed interest in paying for a trip on a suborbital craft.

For now, the man who founded Amazon.com is spending some of the billions earned from the Seattle-based online retailer on high tech equipment and about 600 employees working in a former Boeing airplane parts facility. Bezos said he's convinced the company - a vision of his childhood dreams_will eventually be profitable.

The company isn't taking deposits yet, so it's unclear whether thousands of interested space travelers will translate into sales.

Blue Origin, founded in 2000, has launched a ship twice, and it landed safely. The company plans to keep testing until its usefulness is done then switch to other ships being built to test human flight.

The real money will be made selling rocket engines to others planning to launch satellites and spaceships, Bezos said. United Launch Alliance has asked Blue Origin to build the engine for its new launch vehicle so it can stop relying on Russian-made engines.

Bezos, who still has his day job at Amazon, said he's deeply involved at Blue Origin and spends time in the Kent facility, about 17 miles south of Seattle. He enthusiastically shared technical details and explanations during a media tour and one engineer said he was as knowledgeable about the technology as anyone in the building.

"I only pursue things that I am passionate about," Bezos said. He spoke of dreaming of space travel and building rockets since he was 5.

He said he wasn't ready to share exactly how much he has invested in the space venture, saying just that all the high tech equipment and about 600 employees have added up to "a very significant number."

The media-shy company said welcoming the press to their development floor was a first step toward more openness, but all but a few photographs of the facility were prohibited.

Bezos said he wasn't concerned about his competition to build the next generation of rocket engines because society will need lots of help moving industry and people off the planet.

A handful of other US companies are currently competing in the private space business, including SpaceX and Virgin Galactic, which are also at the testing stage.

Bezos doesn't care about being the first private company to offer space tourism to the masses. The real goal is to perfect their equipment by flying as many as 100 suborbital flights a year. Bezos said safety is the No. 1 goal.

The company also wants to eventually decrease the cost of space launches by enough to put projects like building a colony on Mars within reach. The key is making spaceships reusable, which is Blue Origin's goal, Bezos said.

"What I know you cannot afford is throwing the hardware away," he said.