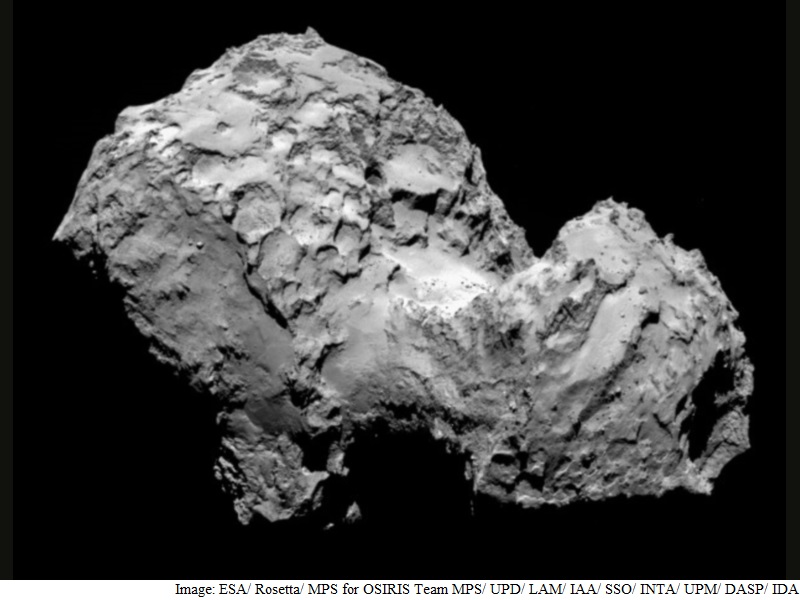 The characteristic "rubber duck" shape of the comet carrying a European robot probe through space was the result of a low-velocity impact billions of years ago between two objects which fused, a study said Monday.

Was it the result of a crash, or did the central "neck" linking the comet's "head" and "body" form through a process of erosion?

Now an international team says it has solved the riddle, affirming in the science journal Nature that: "comet 67P/Churyumov-Gerasimenko is (made) of two distinct objects".

"We conclude that gentle, low-velocity collisions occurred between two fully formed kilometre-sized cometesimals (mini-comets) in the early stages of the Solar System", which formed some 4.6 billion years ago, the scientists said.

The proof, they explained, was found in differences between the onion-like layers of the two lobes.

Using sophisticated imaging systems on board Rosetta, the team discovered that the larger lobe was made up of layers up to 650 metres (2,100 feet) thick, "clearly independent" of the layers in the smaller portion.

But there were many similarities, which suggested the two mini-comets "formed completely independently" before bumping into one another, the scientists said.

"These two bodies should have collied very slowly and merged very slowly otherwise we would not have this ordered (onion-like) structure," team member Matteo Massironi said in a webcast press briefing on Monday.

The European Space Agency's Rosetta craft arrived at the comet, and entered its orbit, on August 6 last year after a decade-long, 6.5-billion-kilometre (four-billion-mile) journey through space.

After its launch in March 2004, the craft was catapulted around the Solar System with gravity boosts from Mars and Earth on four flybys between 2005 and 2009, before being placed in hibernation in June 2011 to conserve energy.

It awoke in January last year, and started its comet approach.

Bumpy landing
Six months later came the shock: as the icy dust ball came into focus, it became clear that 67P had a highly irregular rubber-duck silhouette, not the uniform potato shape scientists had expected.

This limited the choice of landing site for Rosetta's precious payload: a 100-kilogramme (220-pound), washing machine-sized robot lab dubbed Philae, designed to sniff and prod the comet on site.

Finally, on November 12 last year, Philae touched down after a nail-biting seven-hour, 20-kilometre descent from Rosetta, but the landing was bumpy and the little probe ended up in a shaded ditch.

It had enough onboard power for three days of experiments before going to sleep on November 15.

But as 67P drew closer to the Sun, Philae recharged and woke up on June 13, only to fall silent again less than a month later after eight intermittent communications with Earth.

Rosetta, in the meantime, has continued its comet-probing duties with a palette of 11 science instruments - cameras, radar, microwave, infrared and other sensors to analyse the comet surface and gases escaping from it.

The mission was conceived to unravel the mysteries of comets, which many scientists believe "seeded" early Earth with some of the ingredients for life.

"This work proves for the first time that gentle collisions and merging do occur and lead to bilobate (dual-lobe) shape bodies in the Early Solar System," Massironi told AFP by email.

"Our results may provide an important clue on how the planets and the comets formed, and in the latter case where."