Scientists announced Thursday that, after decades of effort, they have succeeded in detecting gravitational waves from the violent merging of two black holes in deep space. The detection was hailed as a triumph for a controversial, exquisitely crafted, billion-dollar physics experiment and as confirmation of a key prediction of Albert Einstein's General Theory of Relativity.

It may inaugurate a new era of astronomy in which gravitational waves are tools for studying the most mysterious and exotic objects in the universe.

(Also see:  What Are Gravitational Waves, and Why Should You Care?)

"Ladies and gentlemen, we have detected gravitational waves. We did it!" declared David Reitze, the executive director of the Laser Interferometer Gravitational-wave Observatory (LIGO), drawing applause from a packed audience at the National Press Club that included many of the luminaries of the physics world.

Some of the scientists gathered for the announcement had spent decades conceiving and constructing LIGO.

"For me, this was really my dream. It's the golden signal for me," said Alessandra Buonanno, who started working on the problem of gravitational waves as a postdoctoral student in 2000 and is now a theoretical physicist at Germany's Max Planck Institute for Gravitational Physics.

The observatory, described as "the most precise measuring device ever built," is actually two facilities in Livingston, Louisiana, and Hanford, Washington. They were built and operated with funding from the National Science Foundation, which has spent $1.1 billion (roughly Rs. 7,532 crores) on LIGO over the course of several decades. The project is led by scientists from the California Institute of Technology and the Massachusetts Institute of Technology, and is supported by an international consortium of scientists and institutions.

LIGO survived years of management and funding turmoil, and then finally began operations in 2002. Throughout the first observational run, lasting until 2010, the universe declined to cooperate. LIGO detected nothing.

Then came a major upgrade of the detectors. LIGO became more sensitive. On September 14, the signal arrived. 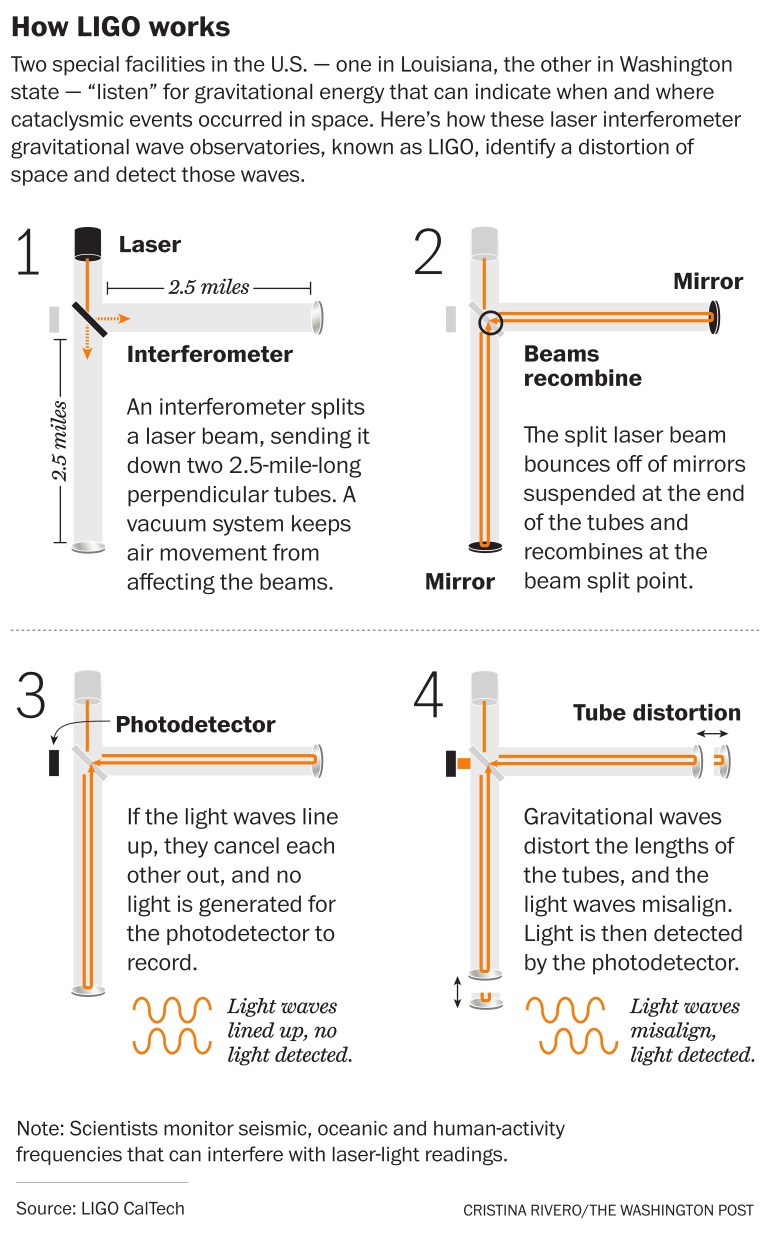 It was a clear, compelling signal of two black holes coalescing, LIGO scientists said in interviews before the news conference. The signal lasted only half a second, but it captured, for the very first time, the endgame of two black holes spiraling together.

"This was truly a scientific moonshot," Reitze said. "I really believe that. And we did it. We landed on the moon."

These black holes were each about the diameter of a major metropolis. They orbited one another at a furious pace at the very end, speeding up to about 75 orbits per second - warping the space around them like a blender cranked to infinity - until finally the two black holes became one.

The pattern of the resulting gravitational waves contained information about the nature of the black holes. Most significantly, the signal closely matched what scientists expected based on Einstein's relativity equations. The physicists knew, in advance, what gravitational waves from merging black holes ought to look like - with a rising frequency, culminating in what they call a chirp, followed by a "ring-down" as the waves settle.

And that's what they saw. They saw it in both Louisiana and Washington state. It was such a strong signal, Reitze said, that everyone knew it was either a real detection of a black hole merger or "somebody had injected a signal into the interferometers and not properly flagged it into the data set. It tuned out that fortunately that wasn't the case."

He said the team, knowing the checkered history of gravitational wave detections that were later discredited, took special care to have the results verified and peer-reviewed prior to the big announcement. The scientists even looked for the possible handiwork of a computer hacker, Reitze said. All reviews held up.

The LIGO success has been a poorly kept secret in the physics world, but the scientists kept their historic paper detailing the exact results secret until Thursday morning.

There is no obvious, immediate consequence of this physics experiment, but the scientists are ecstatic and say this opens a new window on the universe. Until now, astronomy has been almost exclusively a visual enterprise: Scientists have relied on light, visible and otherwise, to observe the cosmos. But now gravitational waves can be used as well.

Gravitational waves are the ripples in the pond of spacetime. The gravity of large objects warps space and time, or "spacetime" as physicists call it, the way a bowling ball changes the shape of a trampoline as it rolls around on it. Smaller objects will move differently as a result - like marbles spiraling toward a bowling-ball-sized dent in a trampoline instead of sitting on a flat surface.

These waves will be particularly useful for studying black holes (the existence of which was first implied by Einstein's theory) and other dark objects, because they'll give scientists a bright beacon to search for even when objects don't emit actual light. Mapping the abundance of black holes and frequency of their mergers could get a lot easier.

Since they pass through matter without interacting with it, gravitational waves would come to Earth carrying undistorted information about their origin. They could also improve methods for estimating the distances to other galaxies.

LIGO scientists, speaking to The Washington Post in advance of Thursday's news conference, say they saw a weaker signal from a black-hole merger about a week after the first detection.

"The geometry of spacetime gives a burp at the end of [the merger]," said Rainer Weiss, an MIT professor of physics emeritus who has labored on LIGO since the 1970s.

No one had ever seen direct evidence of "binary" black holes - two black holes paired together and then merging. The September 14 signal came from about 1.3 billion light years away, though that's a very approximate estimate. That places the black hole merger in very deep space; the signal that arrived in September came from an event that happened before there were any multicellular organisms on Earth.

The reason that gravitational waves have been so difficult to detect is that their effects are tinier than tiny. In fact, the signals they produce are so small that scientists struggle to remove enough background noise to confirm them.

LIGO detects gravitational waves by looking for tiny changes in the path of a long laser beam. In each of the lab's two facilities, a laser beam is split in two and sent down two perpendicular tubes 2.5 miles long. Each arm of the beam bounces off a mirror and heads back to the starting point. If nothing interferes, these two arms recombine at the starting point and cancel each other out.

But a photodetector is waiting in case something goes wrong. If the vibration of a gravitational wave warps the path of one of the lasers, making the two beams almost infinitesimally misaligned, the laser will hit the photodetector and alert the scientists.

To catch movement that small, scientists have to filter out ambient vibrations all the time. And sometimes even seemingly perfect results can end in disappointment: To prevent false positives, LIGO has an elaborate system in place to occasionally inject ersatz signals. Only three scientists on the team know the truth in such cases, and in at least one instance their colleagues were prepared to publish the results when they finally revealed the ruse.

This fail-safe gave pause to many scientists when rumors about the LIGO detection began to circulate in recent months. But the team confidently confirmed that its readings were not falsely injected - it really spotted a pair of black holes.

One of the two black holes had a mass about 36 times greater than our sun. The other registered at 29 solar masses. Both were rather massive as black holes go 10 solar masses is more typical.

"For the first time we have a signature of the heavy black hole forming. That was a surprise," said Vicky Kalogera, a Northwestern University astrophysicist who has been with LIGO for 15 years. "It wasn't a vanilla-type of black hole that we had expected."

When the two black holes came together - spiraling in gradually rather than colliding suddenly in a linear crash - the resulting black hole was not the 65 solar masses you'd expect from basic arithmetic, but only 62. The rest was converted to energy that radiated across space in a grand gravitational burp.

That burp first reached the LIGO facility in Louisiana, then the one in Washington state just 7 milliseconds later. The sequence is important, as it allowed physicists to chart the black-hole collision back to somewhere in the southern sky. And the incredibly brief time delay supports something that theorists have long believed about gravitational waves: They move at the speed of light.

"This is the most direct test of our concepts of black holes," said David Spergel, an astrophysicist at Princeton who was not part of the LIGO team.

The scientists are scrutinizing their data for signs of other violent cosmic events. LIGO's sensitivity continues to improve, and meanwhile other labs will work to catch up to their findings.

"This is such a fantastic new window into the universe - all the rules are different," said Michael Turner, a University of Chicago cosmologist who also was not involved with the new discovery. "This is the Galileo moment of gravity waves."

A black-hole collision sounds like a dramatic event, but it's not really the big news for the physicists. The headline is that LIGO finally worked. Success in detecting gravitational waves is a win for Big Science and for the institutions that backed the project.

"It had a very rough beginning," Weiss said. "The [National Science Foundation] had a tough time explaining to other people why they would back such a crazy thing."

Einstein's theory led to the prediction of gravitational waves, but, as Weiss noted, "Even Einstein wasn't very sure about this."

The Future of Television, According to Google
Facebook Messenger Gets Multiple Account Support; SMS Integration Being Tested