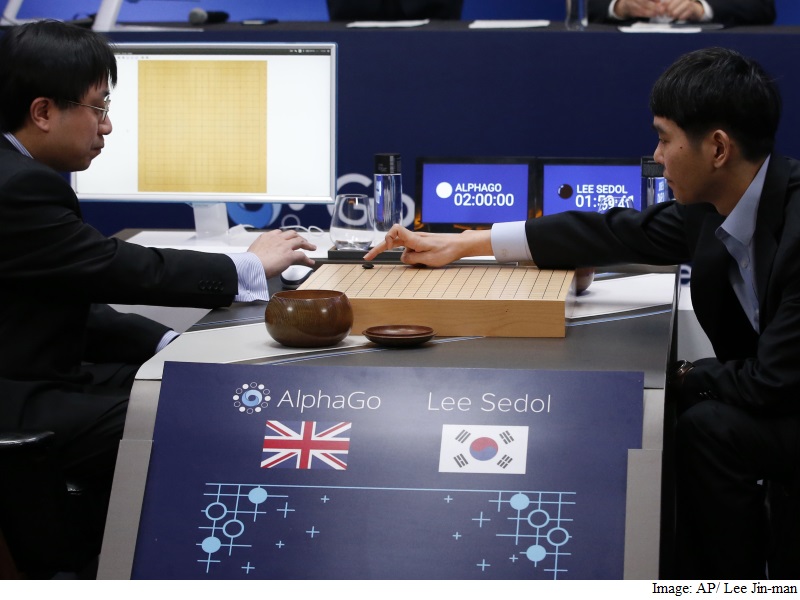 A Google-developed supercomputer stunned South Korean Go grandmaster Lee SeDol by taking the first game of a five-match showdown between man and machine in Seoul on Wednesday.

After about 3-1/2 hours of play, Lee, one of the greatest players of the ancient board game in the modern era, resigned when it became clear the AlphaGo computer had taken an unassailable lead.

Although the computer had whitewashed European champion Fan Hui 5-0 last October, it had been expected to struggle against 33-year-old Lee, who has topped the world rankings for most of the past decade.

But its creators were bullish going into the match at the Four Seasons hotel in the South Korean capital, saying the computer, which employs algorithms that allow it to learn and improve from matchplay experience, was even stronger than when it took on Fan.

Lee was expected to brief reporters later, but commentators following the match said he appeared to have made a bad error in the final stages of the game, which was being watched by hundreds of experts, reporters and VIPs packed into an adjacent press room with a large TV screen.

The match-up sparked enough interest to warrant an Internet live-stream as well as live TV broadcasts in South Korea, China and Japan.

The five-day battle for supremacy between man and machine has been seen as a major test of what scientists and engineers have achieved in the sphere of Artificial Intelligence (AI) over the past 10 years or so.

The most famous AI victory to date came in 1997, when the IBM-developed supercomputer Deep Blue beat the then-world class chess champion Garry Kasparov.

Our 'Mount Everest'
But experts say Go presents an entirely different challenge as the complexity of the game and incomputable number of move options mean that the computer must be capable of human-like "intuition" to prevail.

"Go really is our Mount Everest," said Demis Hassabis, the CEO of AlphaGo developer DeepMind, adding that the public response to the challenge with Lee had been "far bigger than we expected."

When Lee first accepted the AI challenge, he had confidently predicted a clear-cut win, saying that AlphaGo's performance against Fan had been nowhere near good enough to defeat him.

But the grandmaster had confessed to some pre-match nerves on Tuesday.

"Now I think I may not beat AlphaGo by such a large margin like 5-0. It's only right that I'm a little nervous," he said.

Go reputedly has more possible board configurations than there are atoms in the Universe, and mastery of the game by a computer was thought to be at least a decade away until the victory over Fan.

"At the beginning of the match, I never imagined I could lose," Fan told AFP ahead of the showdown in Seoul.

'Human-like' approach
Creating "general" or multi-purpose, rather than "narrow", task-specific intelligence, is the ultimate goal in AI something resembling human reasoning based on a variety of inputs, and self-learning from experience

In the case of Go, Google developers realised a more "human-like" approach would win over brute computing power.

It is able to predict a winner from each move, thus reducing the search base to manageable levels something co-creator David Silver has described as "more akin to imagination".

The match at the Four Seasons promises a $1million (roughly Rs. 6 crores) payout for the winner.