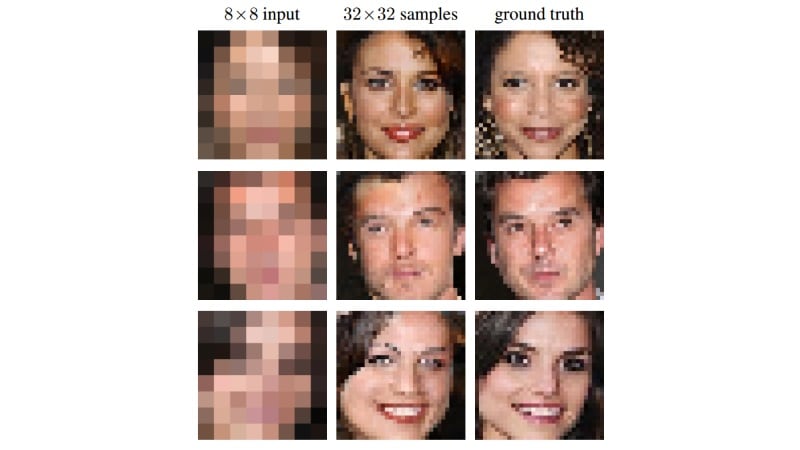 Some technologies depicted in sci-fi movies appear too far-fetched at times but now it seems like the 'zoom and enhance' method, often used to identify crime suspects from pixelated photos, is closer to reality than ever. Google Brain research team has come up with a technology that is able to produce detailed pictures from originally pixelated source images with the help of two neural networks.

The neural networks - Conditioning and Prior - enable Google Brain's software to generate pictures that are much more detailed than the original pixelated 8x8 images. At this point, we would like to clarify that the extra detail is not produced from the source image itself but is added by the best possible guesses made by the software.

The technique used by Google Brain for producing extra detail by the software essentially consists of two parts. First, the Conditioning neural network takes the original pixelated 8x8 picture, compares them with other images available on internet, and downsizes high-res images to find a possible match. The Prior neural network then uses implementation of PixelCNN to add realistic details to the 8x8 source image, Ars Technica points out. Then, on the basis of the acquired knowledge from the analysis of similar class of images, more details are added to the image.

Finally, the output from both neural networks is mashed into one picture to produce a significantly more detailed image than the original. Even though the technique reportedly performed well in real-world testing, it still cannot be termed reliable. As the output image is not generated with real details but guesses, more complications arise for proposal of its usage for surveillance criminal identification.

Government Has Received Over 1,300 Complaints Against E-Commerce Firms