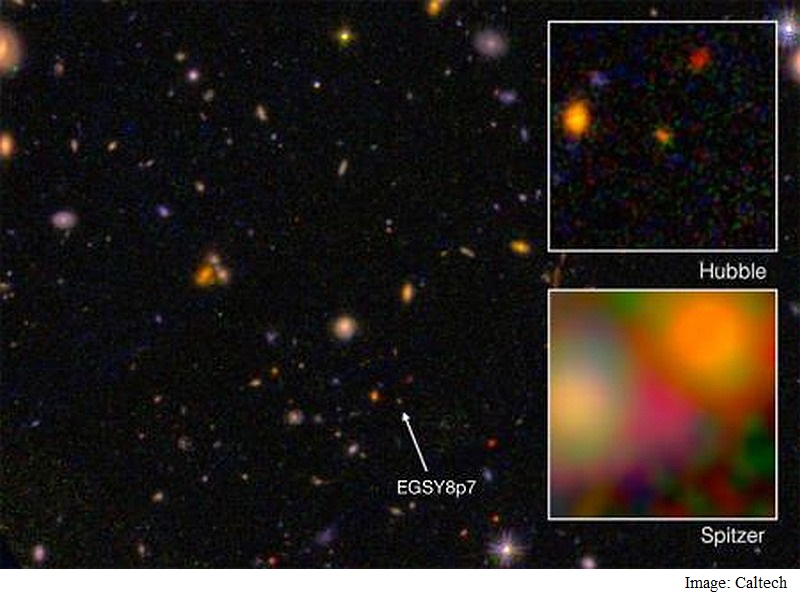 A team of researchers from California Institute of Technology (Caltech) has detected a galaxy more than 13.2 billion years old which may be the most distant galaxy ever found.

The universe itself is about 13.8 billion years old.

"The galaxy we have observed is named EGS8p7, is unusually luminous and may be powered by a population of unusually hot stars," says Sirio Belli, Caltech graduate student who worked on the project.

"It may have special properties that enabled it to create a large bubble of ionised hydrogen much earlier than is possible for more typical galaxies at these times," he added.

Immediately after the Big Bang, the universe was a soup of charged particles and light (photons).

When the universe was just a half-billion to a billion years old, the first galaxies turned on and reionised the neutral gas.

Prior to reionisation, however, clouds of neutral hydrogen atoms would have absorbed certain radiation emitted by young, newly forming galaxies-including the so-called Lyman-alpha line, the spectral signature of hot hydrogen gas that has been heated by ultraviolet emission from new stars, and a commonly used indicator of star formation.

Because of this absorption, it should not, in theory, have been possible to observe a Lyman-alpha line from EGS8p7.

"If you look at the galaxies in the early universe, there is a lot of neutral hydrogen that is not transparent to this emission," noted Adi Zitrin, Nasa Hubble post-doctoral scholar in astronomy.

"The surprising aspect about the present discovery is that we have detected this Lyman-alpha line in an apparently faint galaxy, corresponding to a time when the universe should be full of absorbing hydrogen clouds," noted Richard Ellis, who recently retired from the Caltech faculty.

The team is currently calculating more thoroughly the exact chances of finding this galaxy and to understand whether they need to revise the timeline of the reionisation.

"Reionisation is one of the major key questions to answer in our understanding of the evolution of the universe," Zitrin concluded in the article published in Astrophysical Journal Letters.