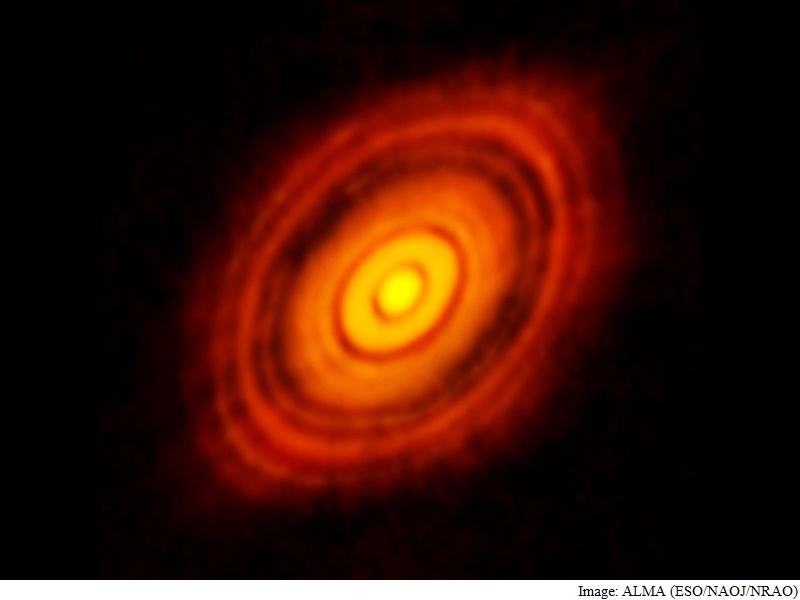 Highlights
Scientists have found evidence of baby planets around a young star about a million years old, a discovery that suggests planets may form in much shorter timescales than previously thought.

In November 2014, Atacama Large Millimetre/submillimetre Array (ALMA) in Chile released a startling image of a young star HL Tauri and its dust disk.

The image, sharpest ever taken for this kind of object, depicts several gaps in the dust disk around the star. Since the disks are sites of planet formation, researchers suggest that the dark gaps are carved by infant planets forming in the disk that sweep away dust along their orbits.

However, HL Tauri is very young, estimated to be only about a million years, and classical studies indicate that it takes more than tens of millions of years for planets to form from small dust.

Some researchers propose other mechanisms to form gaps: changes in the dust size through coalescence or destruction; or the formation of dust due to gas molecules freezing.

Disks around young stars contain gas in addition to the dust. In general the amount of gas is 100 times larger than that of dust.

Researchers, including those from Kagoshima University in Japan, focused on the distribution of gas in the disk to better understand its true nature. If the dust gaps are caused by the variance of the dust properties, that would not directly affect the gas, so no gaps would be seen in the gas distribution.

The image of the gas distribution unveils at least two gaps in the disk, at the radii of 28 and 69 astronomical units.

"To our surprise, these gaps in the gas overlap with the dust gaps," said Hsi-Wei Yen from Academia Sinica Institute of Astronomy and Astrophysics in Taiwan.

"Our results indicate that planets start to form much earlier than what we expected," Yen said. The team also found that the gas density is high enough to harbour an infant planet around the inner gap. Comparing the structure of the inner gap to theoretical models, the team estimates the planet has a mass 0.8 times that of Jupiter. The study was published in the Astrophysical Journal Letters.