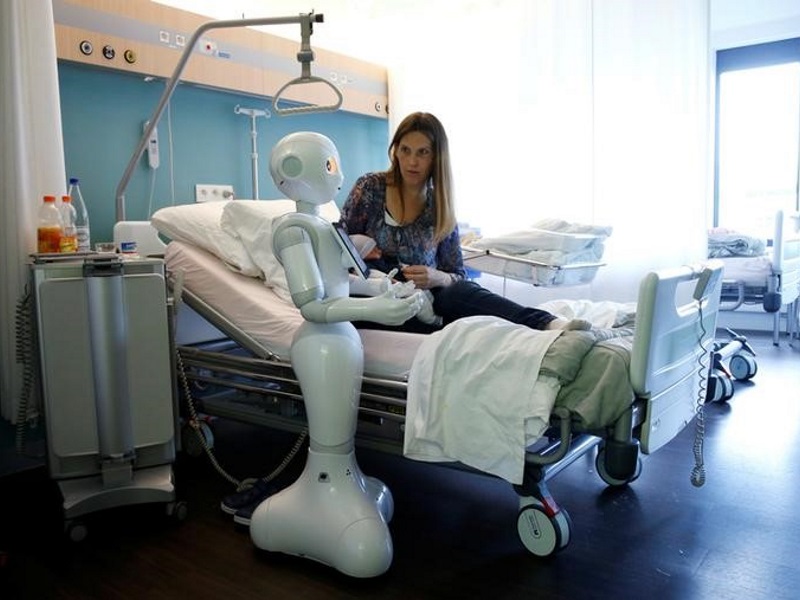 Europe's growing army of robot workers could be classed as "electronic persons" and their owners liable to paying social security for them if the European Union adopts a draft plan to address the realities of a new industrial revolution.

Robots are being deployed in ever-greater numbers in factories and also taking on tasks such as personal care or surgery, raising fears over unemployment, wealth inequality and alienation.

Their growing intelligence, pervasiveness and autonomy requires rethinking everything from taxation to legal liability, a draft European Parliament motion, dated May 31, suggests.

Some robots are even taking on a human form. Visitors to the world's biggest travel show in March were greeted by a lifelike robot developed by Japan's Toshiba and were helped by another made by France's Aldebaran Robotics.

However, Germany's VDMA, which represents companies such as automation giant Siemens and robot maker Kuka, says the proposals are too complicated and too early.

German robotics and automation turnover rose 7 percent to EUR 12.2 billion ($13.8 billion) last year and the country is keen to keep its edge in the latest industrial technology. Kuka is the target of a takeover bid by China's Midea.

The draft motion called on the European Commission to consider "that at least the most sophisticated autonomous robots could be established as having the status of electronic persons with specific rights and obligations".

It also suggested the creation of a register for smart autonomous robots, which would link each one to funds established to cover its legal liabilities.

Patrick Schwarzkopf, managing director of the VDMA's robotic and automation department, said: "That we would create a legal framework with electronic persons - that's something that could happen in 50 years but not in 10 years."

"We think it would be very bureaucratic and would stunt the development of robotics," he told reporters at the Automatica robotics trade fair in Munich, while acknowledging that a legal framework for self-driving cars would be needed soon.

The report added that robotics and artificial intelligence may result in a large part of the work now done by humans being taken over by robots, raising concerns about the future of employment and the viability of social security systems.

The draft motion, drawn up by the European parliament's committee on legal affairs also said organisations should have to declare savings they made in social security contributions by using robotics instead of people, for tax purposes.

Schwarzkopf said there was no proven correlation between increasing robot density and unemployment, pointing out that the number of employees in the German automotive industry rose by 13 percent between 2010 and 2015, while industrial robot stock in the industry rose 17 percent in the same period.

The motion faces an uphill battle to win backing from the various political blocks in European Parliament. Even if it did get enough support to pass, it would be a non-binding resolution as the Parliament lacks the authority to propose legislation.