European Philae Lander Touches Down on Comet, but Fails to Anchor 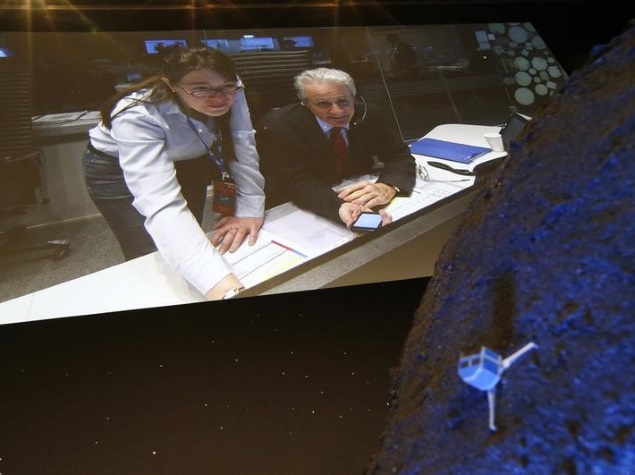 Europe made history Wednesday by placing the first-ever lander on a comet but the robot failed to anchor itself properly, raising concerns at ground control.

But instead of harpooning itself to the surface after a seven-hour descent from mothership Rosetta, early radio signals suggest Philae could have settled in a soft surface or gently lifted off and then redescended.

"So maybe today we didn't once, we even landed twice," Philae lander manager Stephan Ulamec quipped at ground control in Darmstadt, Germany a few hours after touchdown.

"Hopefully, we are sitting there on the surface at a position slightly different to the original landing and can continue our science."

Several instruments onboard Philae had already sent back "plenty of data," he said.

Engineers have yet to figure out what prevented the 100-kilo (220-pound) lander from shooting its duo of harpoons into the comet's surface to prevent it drifting away from its low-gravity host.

Nor is its fate entirely clear.

"Did we just land in a soft sandbox and everything is fine even though we are not anchored... or is there something else happening?" said Ulamec.

With communications between Philae and its parent severed for the coming hours, expected as Rosetta disappears in orbit behind the comet, there may be scant information before a media briefing planned for 1300 GMT on Thursday.

'A big step'
There was cause for celebration as Philae separated from Rosetta as scheduled and headed for "67P" after a decade-long trek covering 6.5 billion kilometres (four billion miles).

A crowd of scientists, guests and VIPS, including two Ukrainian astronomers who discovered the comet in 1969, then cheered as the signal arrived on Earth to confirm contact with the comet.

"Our ambitious Rosetta mission has secured another place in the history books. Not only is it the first to rendezvous with and orbit a comet, but it is now also the first to deliver a probe to a comet's surface."

Jim Green, director of planetary science at NASA, heaped praise on the feat.

"How audacious, how exciting, how unbelievable to be able to dare to land on a comet, to take that step that we've all wanted from a scientific perspective," he said.

"It is the start of something important. The Solar System is mankind's: this mission is the first step to take it. It's ours."

The pair reached their target in August this year having used gravitational boosts by Earth and Mars as celestial slingshots.

Philae was supposed to settle down on "67P" at a gentle 3.5 km per hour, firing two harpoons into the surface before driving in ice screws at the ends of its three gangly legs.

In a final health check before separation, a problem was detected with the small thruster on top of Philae designed to counteract any recoil on landing.

But the glitch was not considered serious enough to call off the countdown.

Turning slowly around "67P" since August, Rosetta has made some astonishing observations of the comet.

Its profile somewhat resembles that of a bathroom rubber duck, but darker than the blackest coal, and with a surface gnarled and battered by billions of years in space: an extremely difficult target to land on.

Philae's work programme is meant to include drilling into the comet surface and analysing samples for telltale isotopes in water and complex carbon molecules.

But in Toulouse, France, astrophysicist Philippe Gaudon, who heads the Rosetta mission at French space agency CNES, said it would be difficult for Rosetta to carry out drilling if it was not anchored.

"However, Philae has not tipped over and seems to be stabilising," he said.

He and other scientists hope drilling samples from the comet will shed light on how the Solar System, and even life on Earth, was created.

One leading theory suggests comets pounded the fledgling Earth 4.6 billion years ago, providing it with carbon molecules and precious water part of the tool kit for life.

Philae has enough battery power for about 60 hours of work, but can continue until March with a solar recharge.

Whatever happens to its payload, Rosetta will continue to escort the comet, scanning it with 11 instruments as it loops around the Sun next year. The mission is scheduled to end in December 2015.