Planet KOI-456.04 appears to be the fourth planet orbiting Kepler-160 star and it takes 378 days to complete one full cycle.

Planet KOI-456.04 receives about 93 percent as much light as Earth gets from the Sun, the study claims.

Astronomers may have discovered an Earth-like exoplanet orbiting a Sun-like star, a little over 3,000 light-years away. The planet named 'Planet KOI-456.04', the unconfirmed exoplanet is thought to be similar to Earth for several reasons. It is said to have a similar distance between its sun - Kepler-160 - with an orbit that takes it 378 days to complete. It also thought to receive 93 percent as much light as Earth gets from the Sun. That when combined with the fact Kepler-160 is thought to be very similar to our own sun in terms of mass and radius, leads scientists to believe they may have found an Earth-like planet in the solar vicinity that has the potential to sustain life.

Most exoplanet discoveries thus far have been around red dwarf stars, which for several reasons would be improbable hosts to habitable planets, including the fact they can emit high-energy flares and radiation that would make it difficult for life to survive. According to a research paper published in Astronomy and Astrophysics journal last week, Planet KOI-456.04 appears to be the fourth planet orbiting the Kepler-160 star.

Planet KOI-456.04 was discovered after examining old data collected by NASA's exoplanet-finding Kepler mission with new algorithms to study the star's (Kepler-160) brightness, a study led by researchers at the Max Planck Institute for Solar System Research (MPS), along with researchers from University of California Santa Cruz as well as NASA.

As an MIT Technology Review report notes, typically, exoplanets are found after looking for stellar transits — ascertained by observing periodic dips in stellar brightness as an object passes in front of the star. This method was used to find the other two confirmed exoplanets (Kepler-160b and Kepler-160c) in the Kepler-160 system, however, it is best used for discovering planets that orbit red dwarfs, which are less bright than our own sun and Kepler-160 - both main sequence stars that are yellow dwarfs. Compared to red dwarfs, main sequence yellow dwarf stars are more suitable to sustain life. 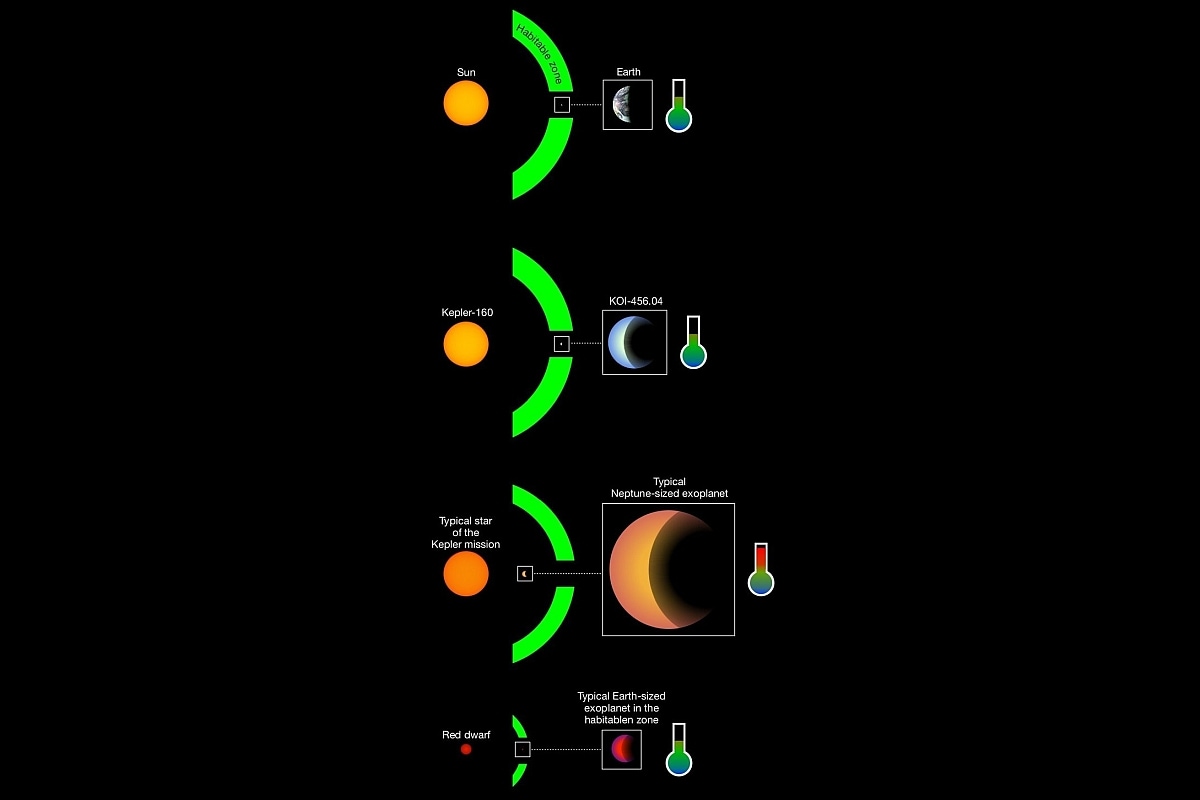 The newly discovered planet candidate KOI-456.04 and its star Kepler-160 (second panel from above) have great similarities to Earth and Sun
Photo Credit: MPS/ Rene Heller

KOI-456.04 is said to be the fourth planet orbiting Kepler-160, with the third called Kepler-160d. It was confirmed indirectly by the same study, as it was not seen to transit the light curve of the star. “Our analysis suggests that Kepler-160 is orbited not by two but by a total of four planets,” Dr. René Heller said, the lead author.

As the MPS statement reads, Kepler-160 was studied for four years by the Kepler mission thanks to its similarity to the Sun, with a "radius of 1.1 solar radii, its surface temperature of 5200 degrees Celsius (300 degrees less than the Sun), and its very Sun-like stellar luminosity."

Thus, a new method was attempted to find exoplanets in the system that measures dimming on a more gradual level than periodic dips in brightness. The researchers used a detailed physical model of the stellar brightness variation, instead of a 'box-like approximation'. “Our improvement is particularly important in the search for small, Earth-sized planets... The planetary signal is so faint that it's almost entirely hidden in the noise of the data. Our new search mask is slightly better in separating a true exoplanetary signal from the noise in the critical cases,” Heller adds.

Thanks to the study, scientists now have a new candidate that is said to be less than twice Earth's size (1.9 Earth radii) and suitable to sustain life thanks to its location in the stellar habitable zone. "Given its Sun-like host star, the very Earth-like orbital period results in a very Earth-like insolation from the star – both in terms of the amount of the light received and in terms of the light colour. Light from Kepler-160 is visible light very much like sunlight. All things considered, KOI-456.04 sits in a region of the stellar habitable zone – the distance range around a star admitting liquid surface water on an Earth-like planet – that is comparable to the Earth's position around the Sun," the MPS statement reads.

As with other exoplanets, more observations are required to confirm the candidate found is indeed a planet - requiring a certainty of 99 percent. Currently, researchers claim it is 85 percent probable that KOI-456.04 is an actual planet, and are hopeful for confirmation from direct observations by two upcoming space telescopes - NASA's James Webb and ESA's PLATO.