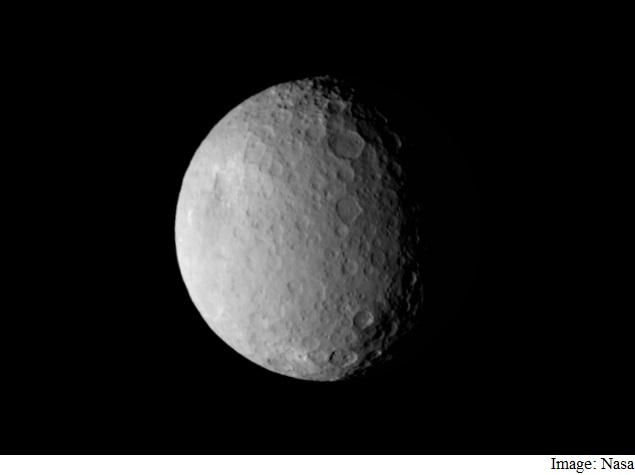 First classified a planet, then an asteroid and then a "dwarf planet" with some traits of a moon the more scientists learn about Ceres, the weirder it becomes.

And new observations of the sphere of rock and ice circling our Sun between Mars and Jupiter have added to the mystery, researchers said Monday.

Astrophysicists have been looking to a $473-million (roughly Rs. 2,950 crores) mission to test theories that Ceres is a water-rich planetary "embryo" a relic from the birth of the Solar System some 4.5 billion years ago.

But an early batch of data from Nasa's Dawn probe, unveiled at a conference of the European Geosciences Union (EGU), may have made the Ceres riddle even greater.

In orbit around Ceres since March 6 after a seven-and-a-half-year trek, Dawn peered at two bright spots on its surface deemed to be telltales of its chemical and physical ID.

But instead of explaining the spots, analysis found the two seemed to "behave distinctly differently," said Federico Tosi, who works on Dawn's Visible and Infrared Mapping Spectrometer (VIR).

While Spot 1 is colder than its immediate surroundings, Spot 5 is not.

The spots are two of a known dozen or so which on photographs taken by Dawn resemble lights shining on a dull grey surface.

Ceres travels at some 5.9 billion kilometres (3.7 billion miles) from the Sun, taking 4.61 Earth years to complete one orbit.

Around 950 km (590 miles) wide, it is the biggest object in the asteroid belt large enough for gravity to have moulded its shape into a ball.

With VIR, the Dawn team have been able to put together images at different wavelengths of light, Tosi told journalists.

One picture, as seen by the human eye, shows Ceres as a "dark and brownish" ball with both white spots clearly visible.

But in thermal images, Spot 1 becomes a dark spot on a reddish ball, indicating it was cooler than the rest of the surface, said Tosi.

The "biggest surprise", he added, was that Spot 5 simply disappeared on the thermal image.

"For sure, we have bright spots on the surface of Ceres which, at least from a thermal perspective, seem to behave in different ways."

Theories about what the spots are range from ice to "hydrated minerals" water not in pure ice form but absorbed by minerals.

Ice would be difficult to explain, though, as Ceres inhabits a zone not quite distant enough from the Sun to allow "stable ice" on the surface, said Tosi of the National Institute for Astrophysics in Rome.

Missing craters
Just as intriguing is that Ceres is very unlike its near neighbour Vesta, an asteroid which Dawn studied in 2011 and 2012.

Vesta is bright and reflects much of the Sun's light, while Ceres is dark a contrast that says these bodies have experienced very different space odysseys.

The team also found fewer large craters on Ceres than observations of Vesta suggested they should.

"When we compared the size of the craters on Ceres with those on Vesta, we're missing a number of large craters, the number we would expect," said Christopher Russell, Dawn's principal investigator.

Pockmarks on the surface did, however, suggest Ceres had a "violent collisional history," said team member Martin Hoffman from the Max Planck Institute for Solar System Research in Gottingen, Germany.

Put together, the case for Ceres as a baby planet that never made it to adulthood remains, for now, in limbo.

More may become clear in the coming months when Dawn, which until now has been on Ceres' dark side, moves closer to probe its surface composition and temperature.

The first object in the main asteroid belt to be discovered, Ceres was observed in 1801 by a Sicilian astronomer, Father Giuseppe Piazzi.

Believing he had seen a planet, Piazzi named his after the Roman goddess of harvests and Sicily's patron saint.

After more, but smaller objects turned up, Ceres was downgraded to an asteroid only to get a status boost in 2006, becoming a "dwarf planet."

Xiaomi Says Lost More Than Half Its Power Bank Sales in 2014 to Counterfeiters
Apple TV Publishers Being Charged 15 Percent of Subscription Fee: Report