DNA Sequenced for the First Time in Space Aboard ISS: Nasa 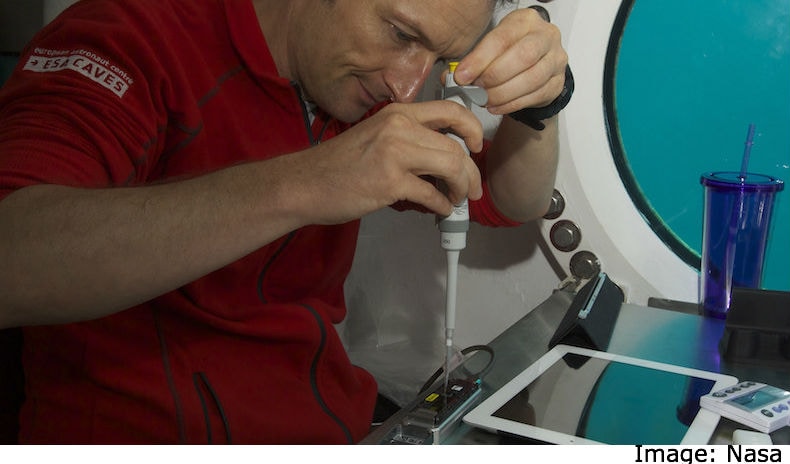 Nasa has successfully conducted the first genome sequencing in space aboard the International Space Station (ISS). The ability to sequence the DNA of living organisms in space opens a whole new world of scientific and medical possibilities, Nasa said.

For the first time ever, DNA was successfully sequenced in microgravity as part of the Biomolecule Sequencer experiment performed by Nasa astronaut Kate Rubins. With a way to sequence DNA in space, astronauts could diagnose an illness, or identify microbes growing in the ISS and determine whether or not they represent a health threat, Nasa said.

A space-based DNA sequencer would be an important tool to help protect astronaut health during long duration missions on the journey to Mars, and future explorers could also potentially use the technology to identify DNA-based life forms beyond Earth.

The Biomolecule Sequencer investigation sent samples of mouse, virus and bacteria DNA to the space station to test a commercially available DNA sequencing device called MinION. The MinION works by sending a positive current through pores embedded in membranes inside the device, called nanopores.

At the same time, fluid containing a DNA sample passes through the device. Individual DNA molecules partially block the nanopores and change the current in a way that is unique to that particular DNA sequence.

By looking at these changes, researchers can identify the specific DNA sequence. Rubins conducted the test aboard the station while researchers simultaneously sequenced identical samples on the ground.

The tests were set up to attempt to make spaceflight conditions, primarily microgravity, the only variables that could account for differences in results. For example, the samples were prepared on the ground for sequencing and researchers selected organisms whose DNA has already been completely sequenced so that they knew what results to expect.

Using the device in the microgravity environment introduces several potential challenges, including the formation of air bubbles in the fluid, according to Aaron Burton, Nasa planetary scientist and principal investigator. On Earth, bubbles rise to the top of a liquid solution and can be removed by centrifuge, but in space, bubbles are less predictable.

"In space, if an air bubble is introduced, we don't know how it will behave. Our biggest concern is that it could block the nanopores," said Burton.

The technology demonstration also seeks to validate that the device is durable enough to withstand vibration during launch and can operate reliably in a microgravity environment when it comes to the measurement of changes in current or the conversion of those changes into DNA sequences.