Each Martian year - the time it takes the Red Planet to orbit the sun once - lasts 687 Earth days.

Monitoring the modern atmosphere, weather and climate fulfills a Curiosity mission goal supplementing the better-known investigations of conditions billions of years ago.

Back then, Gale Crater had lakes and groundwater that could have been good habitats for microbes, if Mars has ever had any.

Today, though dry and much less hospitable, environmental factors are still dynamic, the statement added. 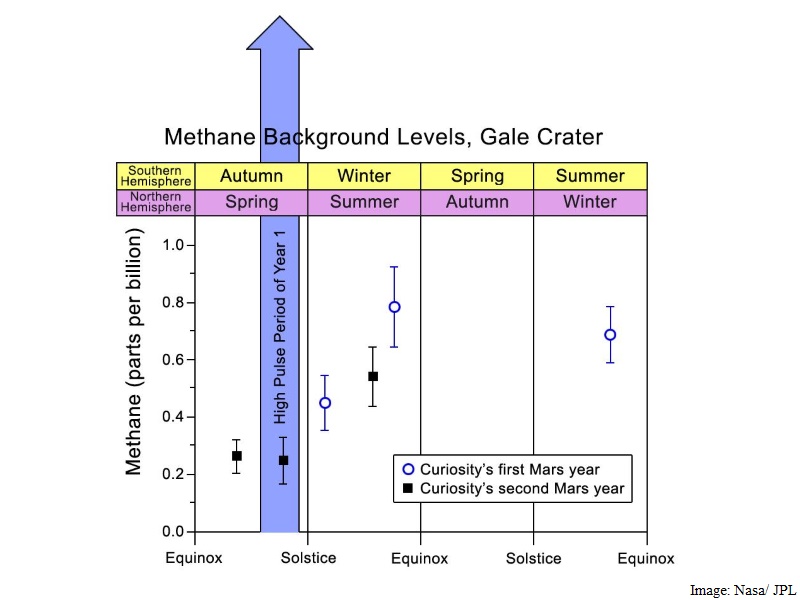 "The duration is important, because it's the second time through the seasons that lets us see repeated patterns," Vasavada noted.

The similar tilts of Earth and Mars give both planets a yearly rhythm of seasons. But some differences are great, such as in comparisons between day and night temperatures.

Even during the time of the Martian year when temperatures at Gale Crater rise above freezing during the day, they plummet overnight below minus minus 90 degrees Celsius, due to the thin atmosphere.

Also, the more-elliptical orbit of Mars, compared to Earth, exaggerates the southern-hemisphere seasons, making them dominant even at Gale Crater's near-equatorial location.

"Mars is much drier than our planet, and in particular Gale Crater, near the equator, is a very dry place on Mars," German Martinez, Curiosity science-team collaborator at the University of Michigan, Ann Arbor.

"The water vapor content is a thousand to 10 thousand times less than on Earth," Martinez said.