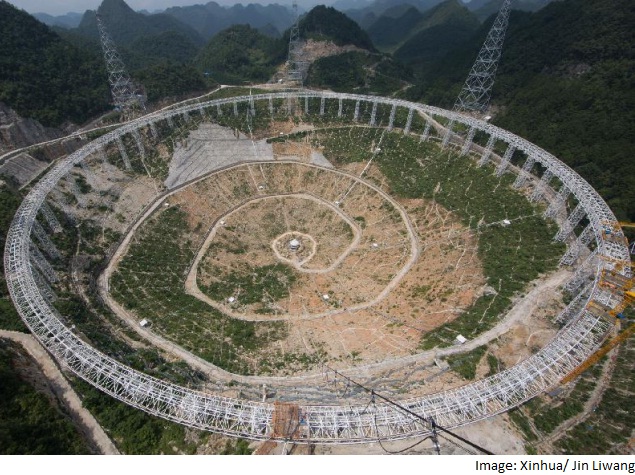 China will press its Supercomputer Skyeye-1, capable of a quadrillion computing operations per second, to support space exploration by the world's largest radio telescope being built in its Guizhou Province.

Assembly of the telescope, with a dish the size of 30 football fields and located deep in the mountains of Guizhou, has got underway, official media reported.

When it is completed in 2016, the 500-metre aperture spherical telescope (Fast) will be the world's largest, overtaking Puerto Rico's Arecibo Observatory, which is only 300 metres in diameter, state-run Xinhua news agency reported.

A radio signal as far as tens of billions of light years away could possibly be caught by the telescope, which will extend China's space tracking scope from moon's orbit to the outside edge of the solar system upon its completion next year.

Skyeye Group signed agreement last November to jointly build a Qiannan Super Computing Centre in Guizhou. Fast's daily peak demand will be above 200 teraflops per second and its first-phase storage demand will be more than 10 petabyte, said Zhang Peiheng, a researcher with the CASICT.

Skyeye-1, with its quadrillion computing operations per second and high-speed network of 100 gigabytes per second, can easily meet the demands of the telescope, said Ren Jingyang, vice president of Dawning Information Industry Co.

The construction of the telescope began in March 2011 in a natural, bowl-shaped valley in the southern part of Guizhou.

Ola to Go App Only, Plans to Shutter Web and Phone Bookings Next Month
'Facebook Obsession Can Lead Girls to Risky Dieting'