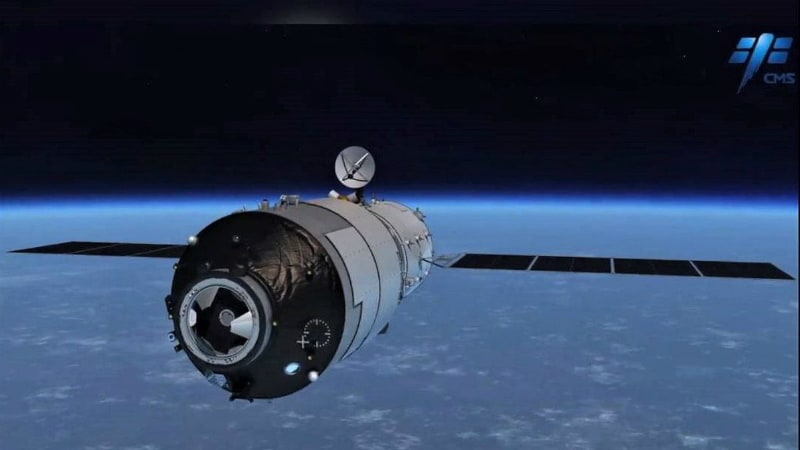 A defunct space laboratory that will plunge back to Earth in the coming days is unlikely to cause any damage, Chinese authorities say, but will offer instead a "splendid" show akin to a meteor shower.

China's space agency said that the roughly eight-tonne Tiangong-1 will re-enter the atmosphere some time between Saturday and Monday. The European Space Agency on Friday gave smaller window between Saturday night and late Sunday evening GMT.

But there is "no need for people to worry", the China Manned Space Engineering Office (CMSEO) said on its WeChat social media account.

Such falling spacecraft do "not crash into the Earth fiercely like in sci-fi movies, but turn into a splendid (meteor shower) and move across the beautiful starry sky as they race towards the Earth", it said.

The lab was placed in orbit in September 2011 and had been slated for a controlled re-entry, but it ceased functioning in March 2016 and space enthusiasts have been bracing for its fiery return.

The ESA said the lab will make an "uncontrolled re-entry" as ground teams are no longer able to fire its engines or thrusters, though a Chinese spaceflight engineer denied earlier this year that it was out of control.

The updated re-entry estimate by ESA is slightly later than its previous calculations. The agency said in a blog post that calmer space weather was now expected as a high-speed stream of solar particles did not cause an increase in the density of the upper atmosphere, as previously expected.

Such an increase in density would have pulled the spacecraft down sooner, it said, adding that the new re-entry window is still uncertain and "highly variable".

Beijing sees its multi-billion-dollar space programme as a symbol of the country's rise. It plans to send a manned mission to the moon in the future.

China sent another lab into orbit, the Tiangong-2, in September 2016 and is a stepping stone to its goal of having a crewed space station by 2022.

Experts have downplayed any concerns about the Tiangong-1 causing any damage when it hurtles back to Earth, with the ESA noting that nearly 6,000 uncontrolled re-entries of large objects have occurred over the past 60 years without harming anyone.

The CMSEO said the probability of someone being hit by a meteorite of more than 200 grammes is one in 700 million.

'Spectacular show'
During the uncontrolled re-entry, atmospheric drag will rip away solar arrays, antennas and other external components at an altitude of around 100 kilometres (60 miles), according to the Chinese space office.

The intensifying heat and friction will cause the main structure to burn or blow up, and it should disintegrate at an altitude of around 80 kilometres, it said.

Most fragments will dissipate in the air and a small amount of debris will fall relatively slowly before landing, most likely in the ocean, which covers more than 70 percent of the Earth's surface.

Jonathan McDowell, an astronomer at the Harvard-Smithsonian Center for Astrophysics, estimates that the Tiangong-1 is the 50th most massive uncontrolled re-entry of an object since 1957.

"Much bigger things have come down with no casualties," McDowell told AFP.

"This thing is like a small plane crash," he said, adding that the trail of debris will scatter pieces several hundred kilometres apart.

At an altitude of 60-70 kilometres, debris will begin to turn into "a series of fireballs", which is when people on the ground will "see a spectacular show", he said.

China will step up efforts to coordinate with the United Nations Office for Outer Space Affairs as the re-entry nears, foreign ministry spokesman Lu Kang told reporters on Friday.

"I want to highlight that we attach importance to this issue and we've been dealing with it very responsibly in accordance with relevant laws and regulations," Lu said.

"What I've heard is the possibility of large amounts of debris falling to the ground is very slim."