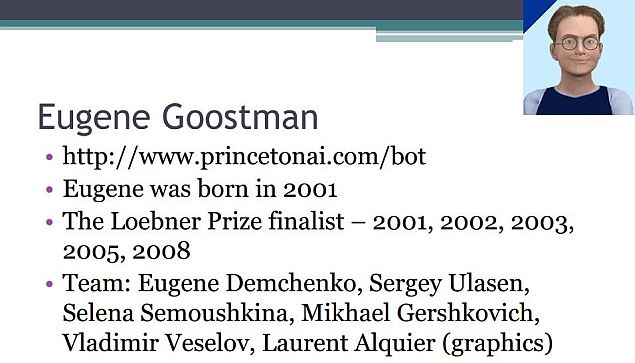 The Russian program - a chatbot named "Eugene Goostman" - convinced 1 in 3 judges at the Turing Test 2014 competition at the Royal Society in London that it was a real person; according to Eugene's makers, it was the first time this has happened since Turing first proposed the test in 1950.

Alan Turing, the brilliant mathematician, cryptographer, philosopher and computer science pioneer, who was prosecuted for homosexuality in 1952, and committed suicide in 1954, developed the Turing test to answer the question, "Can machines think?" He wrote that since thinking is difficult to define, the question should be "are there imaginable digital computers which would do well in the imitation game?"

The test has, over the years, become highly influential, and also widely criticised, and today, aside from the Turing Test by the Royal Society, there is also the Loebner prize, which takes place in the US, which is also a competition to find an artificial intelligence that can beat the Turing test.

At the Turing Test 2014, "Eugene Goostman" engaged in a series of five minute long text conversations with a panel of judges, and convinced 33 percent of them that it was a real human being. The rules state that anything over 30% is seen as passing, and in fact, in the 2012 Turing Test, "Eugene" had already reached 29%.

There are some caveats though - Eugene is a chatbot, which is giving conversational responses from a prepared script, instead of thinking cognitively about what is being said. Also, Eugene was passed off as a 13-year old non-native-English speaking Ukrainian, so any slips in knowledge or language could be explained as honest mistakes by a real person.

Those are pretty big concessions to make, but despite that, the fact that an experienced panel of judges had difficulty in distinguishing between a person and a computer program is impressive.

IBMhas been working in this field to create something they call the WatsonEngagement Advisor, which can be used to answer customer care queries. This kind of technology could also be used in cybercrime - potentially phishing for information from thousands of customers simultaneously.

If you want to try it out yourself, visit here.