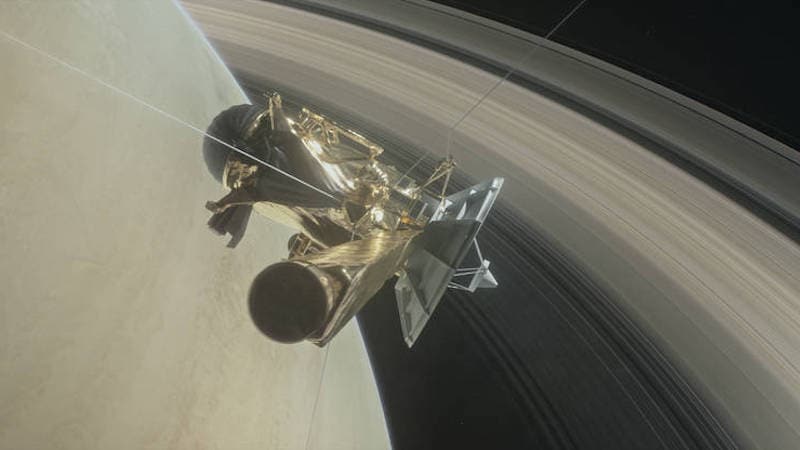 Cassini's first-ever dive through the narrow gap between the planet Saturn and its rings on April 26 was successful and the spacecraft is now in the process of beaming back science and engineering data collected during its passage, NASA said on Thursday.

"I am delighted to report that Cassini shot through the gap just as we planned and has come out the other side in excellent shape," said Cassini Project Manager Earl Maize of NASA's Jet Propulsion Laboratory in Pasadena, California.

We did it! Cassini is in contact with Earth and sending back data after a successful dive through the gap between Saturn and its rings. pic.twitter.com/cej1yO7T6a

Images captured by Cassini spacecraft during its first "Grand Finale" dive past the planet have also been published.

The unprocessed images show features in Saturn's atmosphere from closer than ever before.

"In the grandest tradition of exploration, NASA's Cassini spacecraft has once again blazed a trail, showing us new wonders and demonstrating where our curiosity can take us if we dare," Jim Green, Director of the Planetary Science Division at NASA Headquarters in Washington said.

While mission managers were confident Cassini would pass through the gap successfully, they took extra precautions with this first dive, as the region had never been explored.

The gap between the rings and the top of Saturn's atmosphere is about 2,000 kilometres wide.

The best models for the region suggested that if there were ring particles in the area where Cassini crossed the ring plane, they would be tiny, on the scale of smoke particles.

The spacecraft zipped through this region at speeds of about 124,000 kph relative to the planet, so small particles hitting a sensitive area could potentially have disabled the spacecraft.

As a protective measure, the spacecraft used its large, dish-shaped high-gain antenna as a shield, orienting it in the direction of oncoming ring particles.

Cassini's next dive through the gap is scheduled for May 2.

Following its last close flyby of the large moon Titan on April 21, Cassini began what mission planners are calling its "Grand Finale."

During this final chapter, Cassini loops Saturn approximately once per week, making a total of 22 dives between the rings and the planet.

The spacecraft is on a trajectory that will eventually plunge it into Saturn's atmosphere - and end Cassini's mission - on September 15.