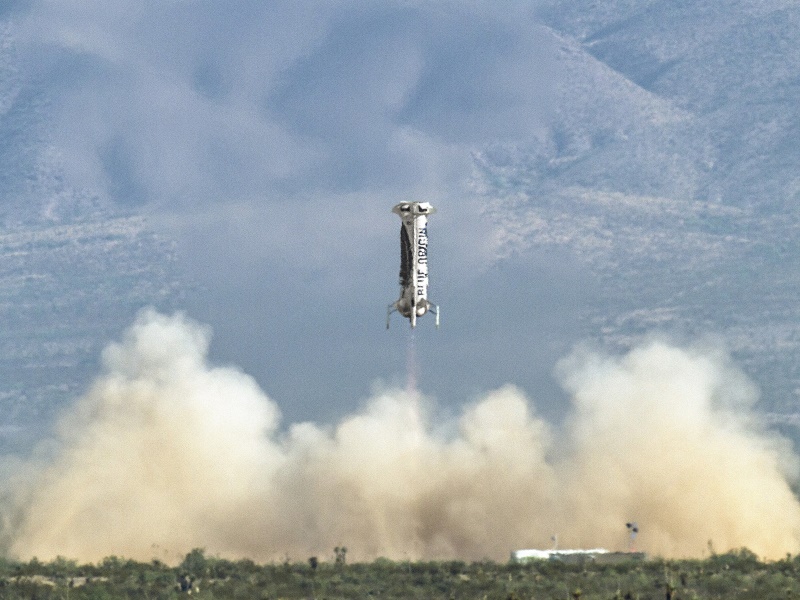 Billionaire Jeff Bezos's space-exploration company launched and landed an unmanned rocket Sunday while testing a parachute failure, a key step in checking the safety of its New Shepard vehicle before sending it to space with astronauts aboard.

The mission was the fourth time the same Blue Origin LLC rocket flew to suborbital space and returned to Earth intact. It was the first incorporating a planned failure of landing equipment for its capsule, to test redundancies meant to protect the vehicle and passengers.

The capsule, which would carry astronauts on a manned mission, landed successfully in West Texas on Sunday at 9:46am local time, after two instead of a typical three parachutes deployed. The capsule and the rocket split after takeoff and landed separately.

The rocket itself uses wings and refires its engine to slow its descent. It landed successfully before the capsule, at 9:43, about 7 minutes after takeoff. It was the first Blue Origin launch broadcast live, on the internet. New Shepard made its first test flight in April of last year.

Bezos, who founded Amazon.com Inc. and owner of The Washington Post, and billionaire Elon Musk want to reduce the cost of space exploration by building rockets that are reusable like airplanes. Blue Origin and Musk's Space Exploration Technologies Corp. have conducted frequent tests in the last couple of years.

SpaceX rockets can be used to deliver people, supplies and equipment to space. The smaller Blue Origin rockets would be used to bring tourists to the edge of space for a few minutes of weightlessness. The company aims to send crews into space next year and expects to sell seats to tourists in 2018 for between $250,000 and $350,000.