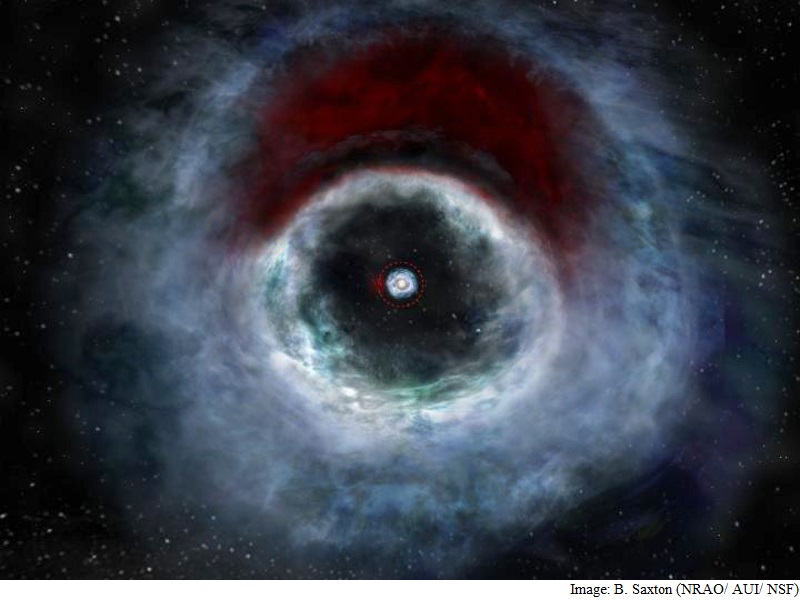 Throwing fresh insights into the planet-forming potential of a binary system, astronomers have taken a new, detailed look at the very early stages of planet formation around a binary star.

Embedded in the outer reaches of a double star's protoplanetary disk, the researchers discovered a striking crescent-shape region of dust that is conspicuously devoid of gas.

For this, astronomers used the Atacama Large Millimetre/submillimetre Array (ALMA) to look at the planet-forming disk around HD 142527, a binary star about 450 light-years from Earth in a cluster of young stars known as the Scorpius-Centaurus Association.

They are separated by approximately one billion miles: a little more than the distance from the Sun to Saturn.

"This binary system has long been known to harbour a planet-forming corona of dust and gas," said Andrea Isella, astronomer at Rice University in Houston, Texas.

"The new ALMA images reveal previously unseen details about the physical processes that regulate the formation of planets around this and perhaps many other binary systems," Isella added in a paper presented at the AAAS meeting in Washington DC this weekend.

The new, high-resolution images of HD 142527 show a broad elliptical ring around the double star.

The disk begins incredibly far from the central star - about 50 times the Sun-Earth distance.

This crescent-shaped dust cloud may be the result of gravitational forces unique to binary stars and may also be the key to the formation of planets, Isella speculated.

Its lack of free-floating gases is likely the result of them freezing out and forming a thin layer of ice on the dust grains.

HD 142527 will be the subject of an upcoming paper led by Rice postdoctoral fellow Yann Boehler who is working in Isella's group.