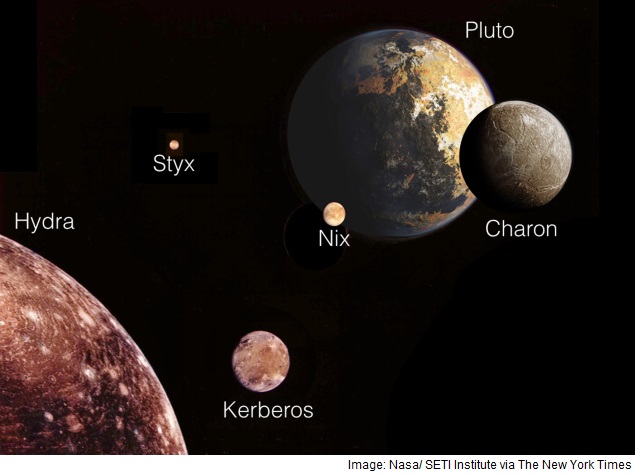 The five moons of Pluto form a sort of miniature planetary system - one that is unique in the solar system.

The largest, Charon, 750 miles wide, was discovered in 1978, and it is so large, about one-ninth the mass of Pluto, that the center of mass of the two lies outside Pluto. That has led some planetary scientists to regard Pluto and Charon as a double planet.

By contrast, Earth is 81 times the mass of the moon, and the center of mass is within Earth.

Two much smaller moons of Pluto, now named Nix and Hydra, were discovered in 2005 in images taken by the Hubble Space Telescope. In 2011, another moon, Kerberos, was discovered between the orbits of Nix and Hydra, and a year later, astronomers announced the fifth moon, Styx.

In an article published Wednesday in the journal Nature, Mark R. Showalter of the SETI Institute in Mountain View, California, and Douglas P. Hamilton of the University of Maryland calculate more precisely the orbits of the four smaller moons and turn up some surprises.

For one, Nix, jostled by the competing gravitational pulls of Pluto and Charon, appears to be rotating chaotically.

"It's not just a little bit chaotic," Showalter said. "Nix can flip its entire pole. It could actually be possible to spend a day on Nix in which the sun rises in the east and sets in the north. It is almost random looking in the way it rotates."

"It's just that we haven't been able to measure them well enough to see it yet," he said.

Hydra, the farthest from Pluto, is also tumbling chaotically.

"It just shows the universe is a really complex and wonderful place," said Scott J. Kenyon, an astrophysicist at the Harvard-Smithsonian Center for Astrophysics in Cambridge, Massachusetts, who wrote an accompanying commentary in Nature.

The findings in Nature are based on Hubble images taken from 2005 to 2012 and include detections of Kerberos and Styx in older photographs where astronomers had previously missed seeing them.

Nasa's New Horizons spacecraft, speeding toward a close encounter with Pluto on July 14, may help answer many questions.

The orbits of the five moons are close, but not exactly in resonance, in which gravity would keep the moons moving in lockstep. Styx's orbital period is close to three times that of Charon, Nix's is close to four times, Kerberos' is close to five and Hydra's is close to six.

"That is not exact, which means it is actually not a resonance at all," Showalter said. "Resonance is not like a game of horseshoes where close counts. You're either in a resonance or you're not."

But the orbits are so close that it strongly suggests that the moons were once in resonance.

"This is not random chance," Showalter said. "There is definitely something about the nature of these near relationships that is a clue about how this system formed and evolved."

Showalter and Hamilton discovered a different resonance, in which Styx's motion is locked to those of Nix and Hydra. The two resonances cannot occur simultaneously, so somehow the original resonance of the five moons fell apart and then three of the moons synchronized in the second one.

Refined estimates of the properties of the moons also indicate that Kerberos appears to have one-third the mass of Hydra and yet reflects only one-twentieth as much sunlight. That would mean it is made of something much darker - like coal - than Nix and Hydra, which have the brightness of dirty snow or desert sand.

"We are totally mystified by the color of Kerberos," Showalter said.

The astronomers estimated that Hydra is a potato-shaped object about 36 miles wide, and Nix is 35 miles wide and a bit skinnier. Kerberos is about 19 miles wide, they said. In the Hubble images, Styx was too small and dim for astronomers to estimate its size and reflectivity.

Pluto and its moons are believed to have formed out of a collision of icy bodies in the outer solar system. One idea is that the brighter moons coalesced out of the debris while the darker Kerberos might be a fragment of the object that slammed into Pluto.