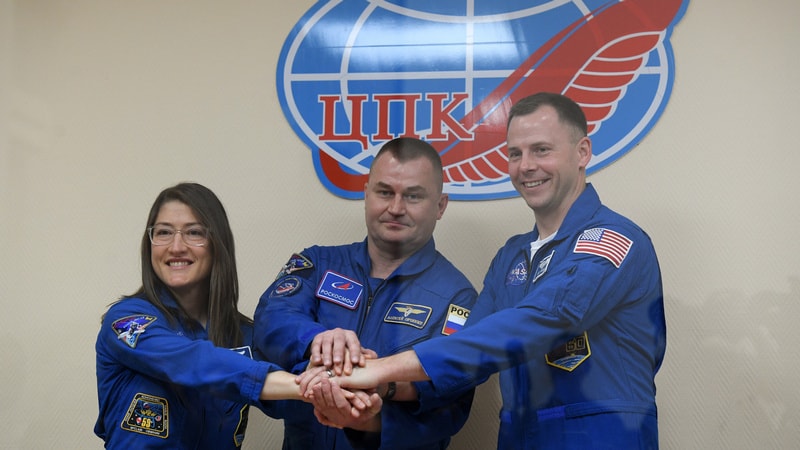 Astronauts who survived an abortive Soyuz launch said  Wednesday they were confident about their upcoming flight to the International Space Station despite some last-minute malfunctions.

On Thursday, US astronauts Christina Koch and Nick Hague and Russian cosmonaut Alexey Ovchinin are scheduled to travel to the International Space Station from Russia's Baikonur cosmodrome in Kazakhstan, five months after the two men were forced to make an emergency landing shortly after blastoff.

It was the first such accident in Russia's post-Soviet history and a major setback for its once proud space industry. The October abort was caused by a sensor damaged during the rocket's assembly.

Flight commander Ovchinin insisted the Soyuz launch vehicle now mounted on the launch pad in Baikonur was in good shape but said that some faulty components in the vehicle had been replaced on Tuesday.

"I know about this situation," said Ovchinin, speaking to reporters ahead of the launch.

"Yesterday they found some minor malfunctions," he said, adding the final tests had been conducted.

"There are no problems," Ovchinin added.

'100 percent confident'
Hague for his part said he looked forward to the flight - his second attempt to go into space for the first time.

"I'm 100 percent confident in the rocket and the spaceship," said the 43-year-old Hague.

The abort helped "clarify in me the reason we do what we do and whether the risks (we take) are worth it. And it is very clear to me that (they are)," said Hague.

Ovchinin, who spent six months at the ISS during a previous mission in 2016, also played down the drama of the emergency landing.

The failed launch was "a little disappointing" after preparations for the flight that lasted a year-and-a-half but also "an interesting and needed experience" that tested the depth of the space programme's preparedness, the 47-year-old said.

If family members were anxious about him preparing for another blastoff, they did not show it, he added.

"Maybe they had some of those thoughts in their head but they would never say anything to me. They know how much I like my work!"

'Cooperating among partners'
There has already been one successful manned launch to the ISS since the failed mission.

Oleg Kononenko of the Russian space agency Roscosmos, Anne McClain of NASA and David Saint-Jacques of the Canadian Space Agency blasted off to the orbiting outpost in December and are expected to greet their new crewmates at the hatch early Friday.

Koch, Hague and Ovchinin's six-hour flight will also be closely watched for another reason.

SpaceX's successful test launch to the ISS this month has challenged an eight-year monopoly on travel to the ISS enjoyed by Russia ever since NASA stopped its launches there.

The trio and their three-man backup crew spoke of cooperation rather than competition following the mission seen by some as the dawn of an era of commercial space travel.

Koch, a 40-year-old rookie, said the SpaceX success was a "great example of what we've been doing for a very long time."

"And that is cooperating among partners and making things that are very difficult look easy."