Astronauts Capture Volcano Erupting After Nearly a Century of Silence

Astronauts aboard the ISS captured the breathtaking scene Saturday showing the vigorous eruption of the Raikoke volcano. 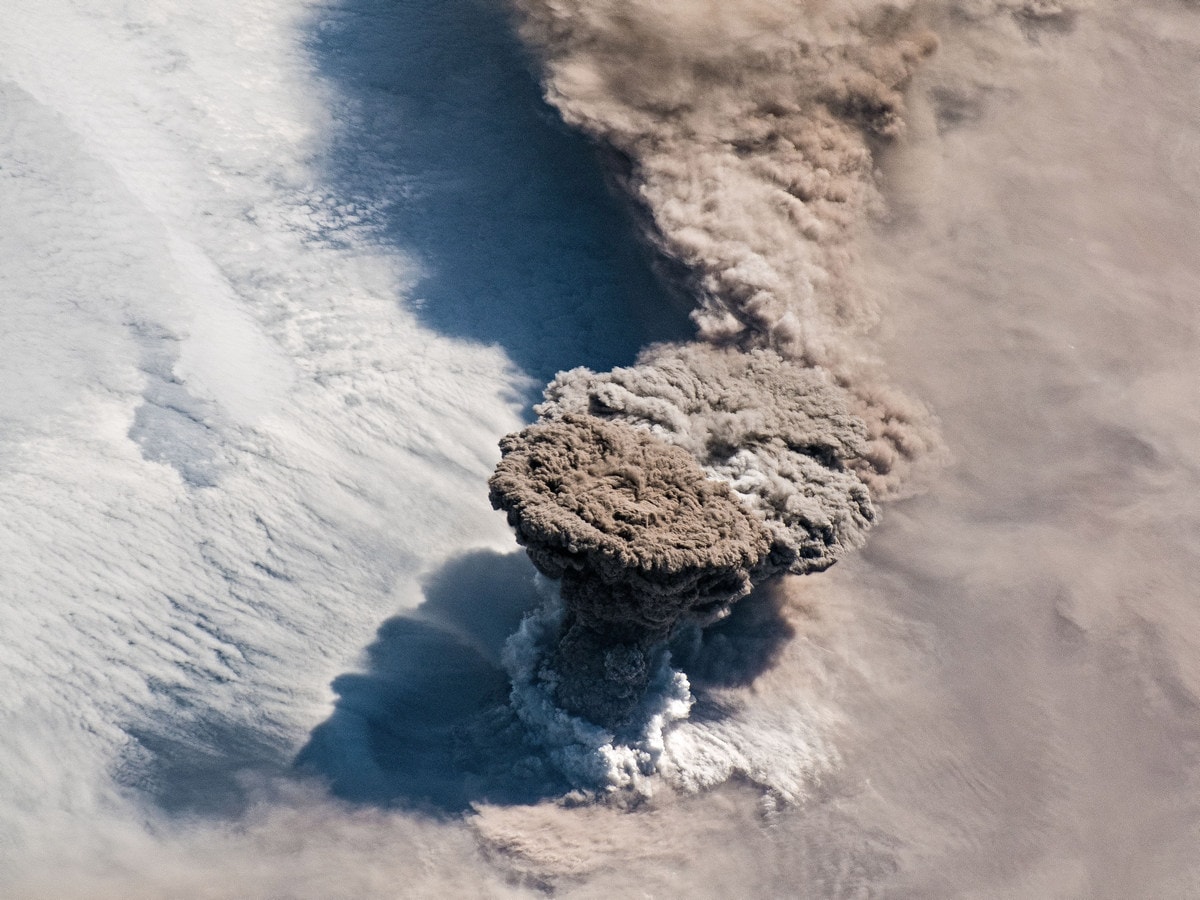 Watching a volcano erupt would be cool. But having a front-row seat 254 miles above the volcano? That would be a view.

Astronauts aboard the International Space Station captured the breathtaking scene Saturday showing the vigorous eruption of the Raikoke volcano.

Raikoke is an uninhabited island along the Kuril chain, a necklace of narrow strip islands draped 500 miles from northern Japan to northeast Russia. Formerly owned by Japan, the volcanic island - which occupies an area less than two square miles - is now under the control of Russia, and has been since World War II.

The aerial view offers a perspective seldom seen during major eruptions. Like a thunderstorm, a mushroom cloud blossoms over the volcano, where ash is catapulted into the sky with explosive force. The updraft is so strong in the middle that it "outruns" the plume's periphery, making the edges curl down before becoming entrained in the rising cloud again. During Saturday's eruption, the plume may have rocketed up more than 50,000 feet (10 miles).

It's easy to guess which way the winds were blowing by looking at the photograph. A more diffuse, expansive sheet of ash clouds lingers downwind, transported by strong upper-level winds over the Sea of Okhotsk. Volcanic ash is heavy in silicates, which have a melting temperature close to 2,000 degrees. Many commercial aircraft engines operate at temperatures well over 2,500 degrees - meaning the dust-like particles would melt and stick to vital mechanics in the plane. That can cause them to "choke" an engine, making volcanic ash clouds dangerous for aviation.

Volcanic ash can't be seen on traditional radar or the forward-looking radar in the nose of most jets. That makes forecasting it vitally important. Visibly, ash clouds are easy to spot from far away, so they're simple to avoid during the daytime. But if a plane was to enter an ash cloud at night, it would have one telltale sign: electricity arcing across the windshield.

Volcanic ash clouds are highly electrified. If a plane flew into one, so much charge would build up that discharges of St. Elmo's Fire would leap across the windshield like small lightning bolts.

Raikoke's ash cloud was no exception, with hundreds of lightning bolts leaping from the supercharged ash above. Atmospheric scientists refer to this lightning barrage as a "dirty thunderstorm."

The intensity and frequency of volcanic lightning discharges can offer insight about how robust the eruption was. Lightning activity peaked during four main periods, suggesting Raikoke's eruption was several individual bursts. That's also evident in the shape of the clouds: notice the downwind anvil is already there while a new plume immediately goes over the volcano.

Near the base of the plume, a collar of white, puffy clouds can be seen. That's water vapour - not ash. The enormous amount of gas and other materials released by the volcano probably contained water vapour, with the temperature contrast between the fiery plume and the air around it causing condensation.

What would it be like under this cloud? First, you'd see the amber, sand-coloured anvil approaching. There might be an ominous display of mammatus clouds, the iconic pouch-like bags that hang beneath foreboding storms that usually are a sign of turbulence in the atmosphere. The sun would appear a creepy orange colour until it disappeared. Lightning would crackle, crawling along the anvil; the gases in the atmosphere would make it a neon-purple colour. Bolts would hit the ground as far as 60 miles away.

Closer to the plume, you might get a spattering of small pebbles raining down, possibly with a thin glaze of ice around them, like rocky hailstones. Depending on the temperature of the atmosphere, deadly gas and ash might make it down toward the surface. A number of whirlwinds and waterspouts would likely also be dancing.

Saturday's eruption marks Raikoke's first since 1924. Before that, a "catastrophic" eruption occurred in 1778. In the meantime, there's no telling what Raikoke's next move will be.