Wearing a white blouse and her dark hair hanging loose, Ai-Da looks like any artist at work as she studies her subject and puts pencil to paper. But the beeping from her bionic arm gives her away - Ai-Da is a robot.

"The technological voice is the important one to focus on because it affects everybody," he told Reuters at a preview.

"We've got a very clear message we want to explore: the uses and abuses of AI today, because this next decade is coming in dramatically and we're concerned about that and we want to have ethical considerations in all of that."

Named after British mathematician and computer pioneer Ada Lovelace, Ai-Da can draw from sight thanks to cameras in her eyeballs and AI algorithms created by scientists at the University of Oxford that help produce co-ordinates for her arm to create art. 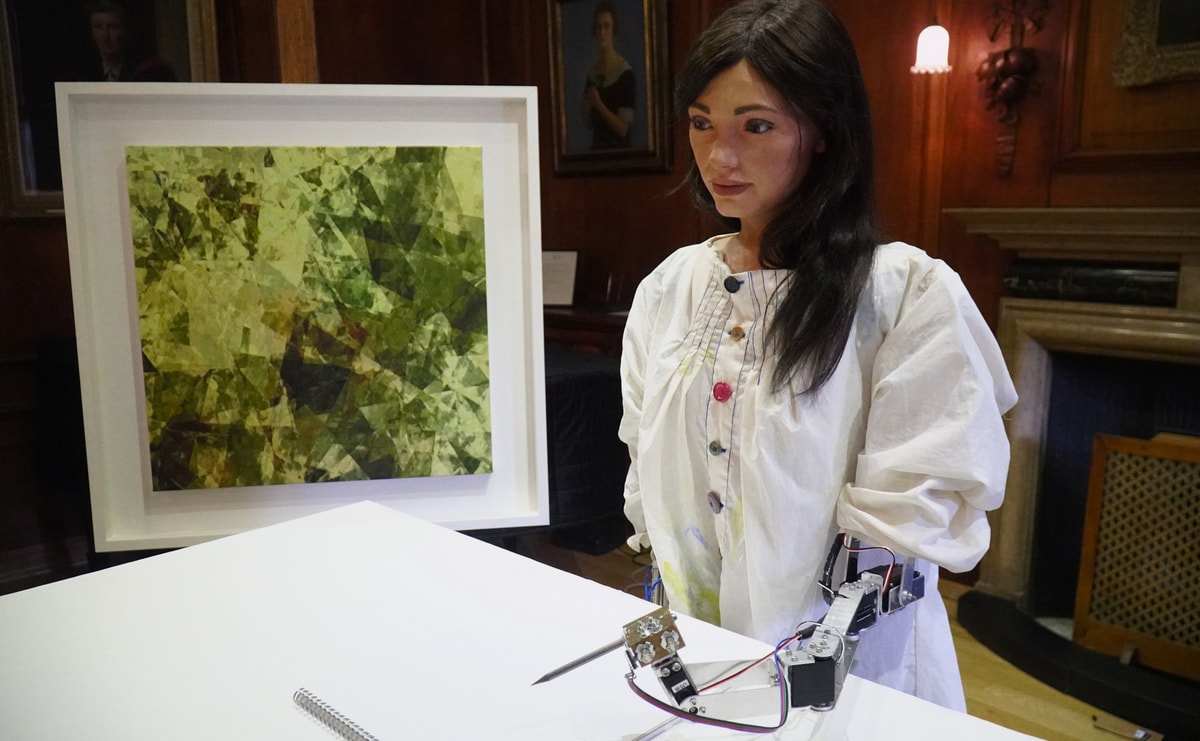 She uses a pencil or pen for sketches, but the plan is for Ai-Da to paint and create pottery. Her paint works now are printed onto canvas with a human painting over.

"From those coordinates from the drawing we've been able to take that into a algorithm that is then able to output it through a Cartesian graph that then produces a final image," Meller said.

"It's a really exciting process never been done before in the way that we've done it...We don't know exactly how the drawings are going to turn out and that's really important."

On show at the "Unsecured Futures" exhibition are drawings paying tribute to Lovelace and mathematician Alan Turing, abstract paintings of trees, sculptures based on Ai-Da's drawings of a bee and video works, one of which, "Privacy" pays homage to Yoko Ono's 1965 "Cut Piece".

Ai-Da, whose construction was completed in April, has already seen her art snapped up.

"It's a sold out show with over a million pounds worth of artworks sold," Meller said.

The exhibition, which opens on June 12 at the Barn Gallery at St John's College, looks at the boundaries between technology, AI and organic life.

Asked by Meller about "all the AI going on at the moment", Ai-Da, who has pre-programmed speech, replied: "New technologies bring the potential for good and evil. It is a great responsibility to try to curb excesses of negative use, something that we all must consider."