3D-Printed 'Microfish' Could Be Used for Human Drug Delivery 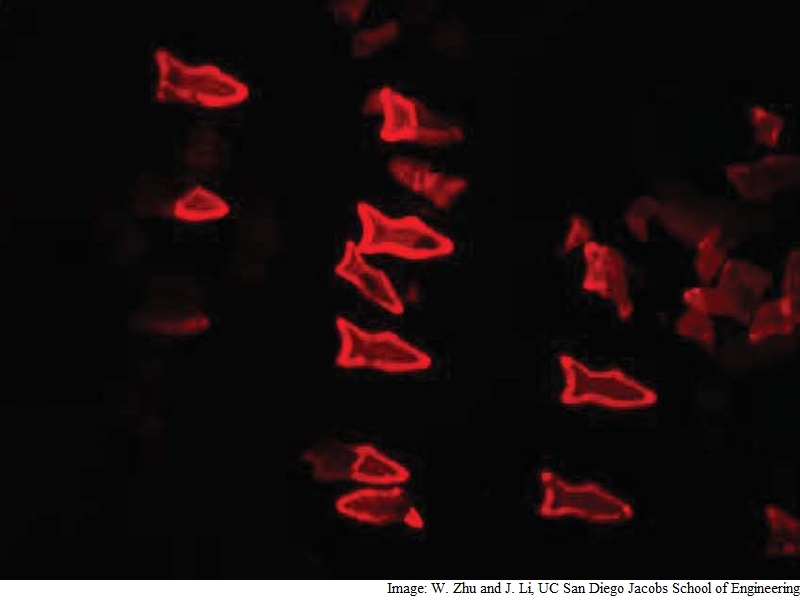 Researchers have developed 3D-printed magnetically controlled fish-shaped microrobots that could be used for directed drug delivery in humans.

Nanoengineers used an innovative 3D printing technology to manufacture multipurpose fish-shaped microrobots - called microfish - that are chemically powered by hydrogen peroxide and magnetically controlled. These proof-of-concept synthetic microfish will inspire a new generation of "smart" microrobots that have diverse capabilities such as detoxification, sensing and directed drug delivery, researchers said.

Researchers led by Shaochen Chen and Joseph Wang of the University of California, San Diego, were able to custom-build microfish that can do more than simply swim around when placed in a solution containing hydrogen peroxide.

Researchers installed platinum nanoparticles in the tails of the microfish, which react with hydrogen peroxide to propel the microfish forward, and magnetic iron oxide nanoparticles in the heads, which allowed them to be steered with magnets. "We have developed an entirely new method to engineer nature-inspired microscopic swimmers that have complex geometric structures and are smaller than the width of a human hair," said the co-first author Wei Zhu, a PhD student at the Jacobs School of Engineering at UC San Diego.

As a proof-of-concept demonstration, the researchers incorporated toxin-neutralising nanoparticles throughout the bodies of the microfish.

The researchers mixed in polydiacetylene (PDA) nanoparticles, which capture harmful pore-forming toxins such as the ones found in bee venom. When the PDA nanoparticles bind with toxin molecules, they become fluorescent and emit red-coloured light. The team was able to monitor the detoxification ability of the microfish by the intensity of their red glow.

"Another exciting possibility we could explore is to encapsulate medicines inside the microfish and use them for directed drug delivery," said co-first author Jinxing Li, PhD student at UC San Diego.

The new microfish fabrication method is based on a rapid, high-resolution 3D printing technology called microscale continuous optical printing (micro-COP). Some of the benefits of the micro-COP technology are speed, scalability, precision and flexibility.

Within seconds, the researchers can print an array containing hundreds of microfish, each measuring 120 microns long and 30 microns thick.

Since the micro-COP technology is digitised, researchers could easily experiment with different designs for their microfish, including shark and manta ray shapes. The research was published in the journal Advanced Materials.