With New Tech, Treadmills Are Getting Trendy

The boring old treadmill workout is having a moment right now. 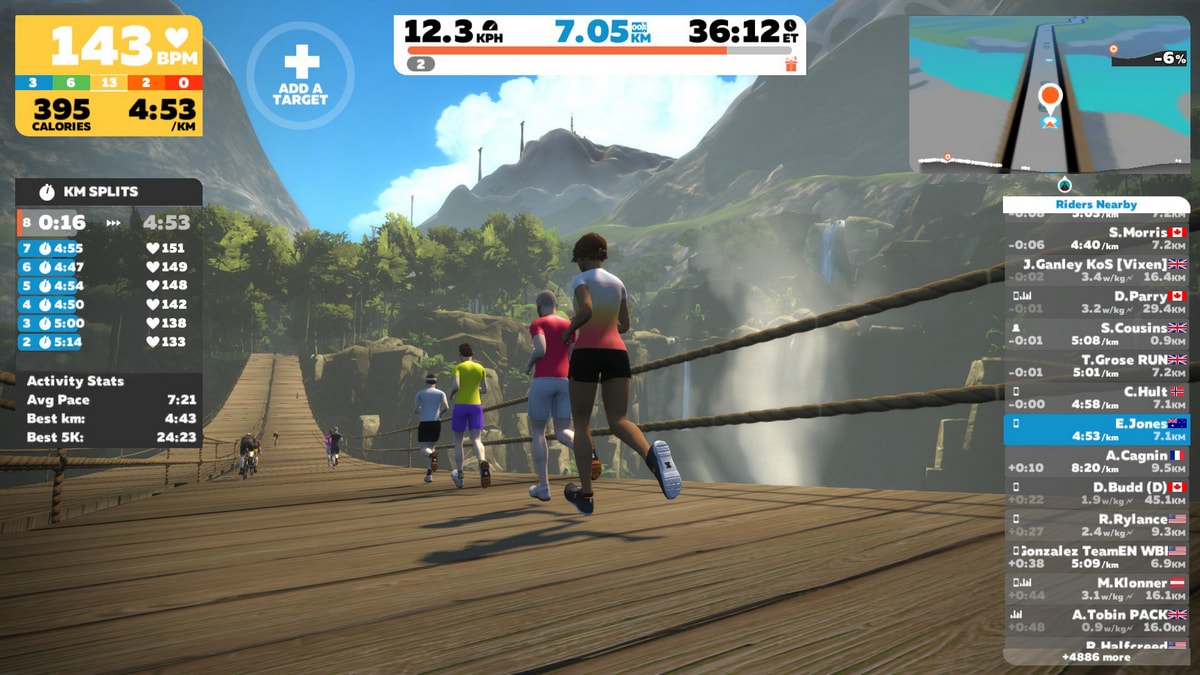 On a recent evening, Elizabeth Ewens was in the middle of an intense run workout. Her coach told her to kick it up, so she did and received encouragement from a fellow runner. She finished the workout feeling good.

While Ewens' evening workout sounds like what running groups around the world do several nights a week, she was actually in her home, live-streaming a treadmill class, complete with motivational instructor, music and leader board, to a monitor on her screen.

"Sometimes you know you're not going to motivate yourself during a workout and you need someone to set the bar for you," the 49-year old California attorney says.

The boring old treadmill workout is having a moment right now.

For most runners and gym-goers, the treadmill is a necessary evil. It's an easy (and safe) way to get your workout in when it's dark outside or the weather is less than ideal. For Ewens, the above-average winter rainfall in Northern California forced her indoors. But a combination of new technology and treadmill classes offered by many gyms has given the machine a new lustre.

According to year-end data from ClassPass, a service that connects people to fitness studios and gyms, treadmill classes were the fastest growing trend in 2018 among its users.

From on-demand and group workouts to virtual running worlds with simulated courses, companies have given the most boring cardio machine a much-needed makeover, much as group cycling studios and spinning classes have revolutionized biking for exercisers. Treadmill-only studios, such as Stride in Pasadena, California, to Equinox's stand-alone Precision Run Studio, have cropped up across the country, and companies such as Peloton, iFit and Zwift are catering to devoted "tread" fans with virtual classes in their own homes, mostly via apps.

"This old-school device is becoming more new school," says Natalia Mehlman Petrzela, associate professor of history at the New School in New York City, who's working on a book about fitness culture. "With all the innovation happening, it can be part of the vanguard of exercise culture and programming."

"It has been an incredible routine-busting addition to my workouts," Ewens says. Even as the weather improved, she continues to incorporate virtual-home-running classes into her routine.

There's a good reason the treadmills is nicknamed the "dreadmill."

The cardio machine was originally used as a torture device, Mehlman Petrzela says. British prisoners were forced to walk the treadmill to pump water and for punishment in the 18th and 19th centuries. (Irish poet and playwright Oscar Wilde was said to have walked on a treadmill for up to six hours a day while imprisoned, according to British literature professor Vybarr Cregan-Reid).

It wasn't until the 1970s that the treadmill earned its reputation as a fitness device as the running boom began, Mehlman Petrzela says. Since then, the treadmill has been a reliable, if dull, mainstay in gyms.

A perfect storm has led to the treadmill's recent resurgence.

The fitness industry is booming as more people focus on health. Running is efficient - and it can be done quickly from home. While most treadmills have always provided measures of time, mileage and often calories, newer machines offer more granular data, giving users reading on everything from heart rate to mile splits to running cadence and "power." "People love data and analytics, and the treadmill gives you feedback," Mehlman Petrzela says.

In treadmill classes, a running coach or leader takes advantage of all the new data to craft a demanding and interesting workout that a majority of people wouldn't do, or know how to do, on their own. During one recent Peloton class, for instance, instructors guided runners through a series of fast-paced intervals and rolling hills by telling them when to adjust both speed and treadmill incline while providing guidance on effort level and tips on running form, all to the beat of a pumping playlist.

Instructors sometimes craft intervals - speed running for a short distance - around a specific runner's one-minute personal record, the fastest pace a runner can hold for one minute. Runners are then told to adjust treadmill speed and incline based on that pace. "We're taking the workload off your shoulders," says Rebecca Kennedy, an instructor for Peloton.

That's the main reason James Macdonald, 25, became a devotee of Mile High Run Club, a boutique treadmill-only studio in New York City. "I'm so used to running outside that I didn't think I'd like it, but I really enjoy it," he says. "It's a good workout. I don't have to worry about things like music."

At-home and in-studio streaming running programs, meanwhile, offer hundreds of diverse workouts, which can be more interesting than clicking off miles while watching a television in a gym television

Peloton's Tread, which provide access to eight live-streamed classes a day and thousands of preprogrammed workouts, retails for $4,295. NordicTrack's treadmills range between $1,799 and $2,699. For those who prefer audio-only (and a lower price tag), Aaptiv offers running workouts through its app, where coaches lead runners through training session on their own treadmill for a monthly subscription of $14.99

For app-based programs, runners cue them up on a phone or tablet and prop them on their treadmill, or stream them to a home television if it has the capability for that. Runners hear and see the instructor as motivational music plays.

Beyond the high-tech equipment, many gyms say the secret sauce behind the growth in popularity of virtual and real treadmill classes has less do with miles or splits and more with converting an often solitary act into the camaraderie, energy and competition typically found on a group run or race.

Cynthia Steele, 45 and a live events and concert producer from Germantown, Maryland, loves running with friends but cannot always organize such runs to fit into her schedule.

Recently, she started using Zwift Run to make the exercise less solitary. With a footpod or smart shoe that transmits to the app, Steele's avatar appears on screen. She can see others and run alongside them using the app at the same time or join a group run or race.

Runners can message one another and send encouragement in real time, too. Zwift essentially gamifies the sport of running. "It looks like a video game," Steele says. "You earn different levels and can unlock different outfits (for your avatar). Sometimes I'd rather go downstairs to run than go outside because it makes me want to hit the next level."

As when outdoors, running on a treadmill with a group, whether in-person in a class, or virtually, can make the miles fly. Treadmill studios and streaming workouts make it possible for a group of diverse runners with different levels of fitness to run together. There are no stragglers or too-fast runners.

"Everyone starts and finishes together. There's still the energy and momentum of a group-based setting without the feeling of being left behind or that you don't belong," says Rich Velazquez, chief operating officer of the Mile High Run Club.