When a Comet Flyby Wreaked Havoc Around Mars 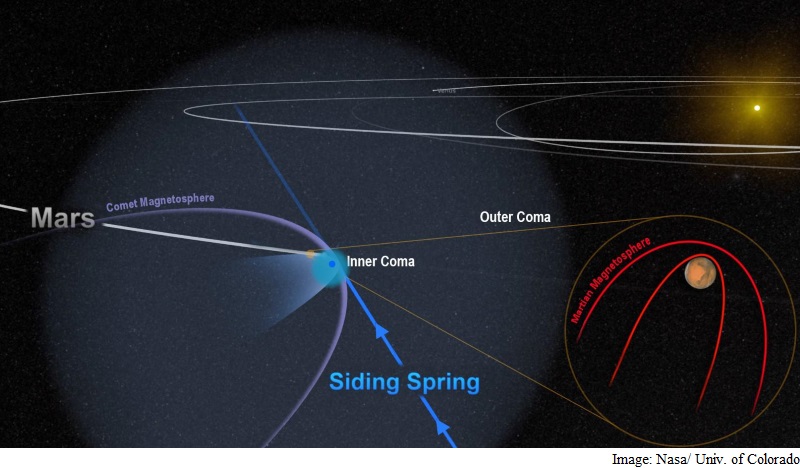 When a historic comet struck Mars in October 2014, Nasa switched off its Mars Atmosphere and Volatile Evolution (MAVEN) spacecraft and other Mars orbiters to protect sensitive equipment aboard them from possible harm.

But a few instruments, including MAVEN's magnetometer, remained on, conducting observations from a front-row seat during the comet's remarkably close flyby.

Now, after scanning the data, scientists have witnessed a one-of-a-kind intimate view of the havoc that the comet's passing wreaked on the magnetic environment or magnetosphere around Mars.

"Comet 'Siding Spring' plunged the magnetic field around Mars into chaos. We think the encounter blew away part of Mars' upper atmosphere, much like a strong solar storm would," said Jared Espley, a MAVEN science team member at Nasa's Goddard Space Flight Center in Greenbelt, Maryland.

Unlike Earth, Mars is not shielded by a strong magnetosphere generated within the planet.

When comet "Siding Spring" passed Mars, the two bodies came within about 140,000 kms of each other.

The comet's coma (envelope of gas flowing from a comet's nucleus as it is heated by the Sun) washed over the planet for several hours, with the dense inner coma reaching, or nearly reaching, the surface.

Mars was flooded with an invisible tide of charged particles from the coma and the powerful magnetic field around the comet temporarily merged with - and overwhelmed - the planet's own weak one.

"The main action took place during the comet's closest approach but the planet's magnetosphere began to feel some effects as soon as it entered the outer edge of the comet's coma," Espley informed in a paper published in the journal Geophysical Research Letters.

By the time of closest approach - when the plasma from the comet was densest - Mars' magnetic field was in complete chaos.

Even hours after the comet's departure, some disruption continued to be measured.

Espley and colleagues think the effects of the plasma tide were similar to those of a strong but short-lived solar storm.

"With MAVEN, we're trying to understand how the sun and solar wind interact with Mars," added Bruce Jakosky, MAVEN's principal investigator from the University of Colorado.

By looking at how the magnetospheres of the comet and of Mars interact with each other, we're getting a better understanding of the detailed processes that control each one, the authors noted.