Super Blue Blood Moon 2018: What Is It, and When and Where to Watch It in India

Today, on January 31 2018, a rare lunar phenomenon - termed "super blue blood moon" - will take place in many parts of the world. This spectacle can be observed from Asia (including parts of India), North America, and Australia. The last super blue blood moon was reportedly seen on December 30, 1982, making it more than a quarter of a century since the last one. Observing the event will also help NASA scientists determine where to land a rover on Earth's only natural satellite.

What is a super blue blood moon?

The super blue blood moon will combine the blue moon, super moon, and total eclipse, all three being rare events. The moon will appear blood red in colour as it crosses into the shadow of the Earth due to this phenomenon.

A "blue moon" is the term used when the full moon appears twice in less than 28 days, as it takes the moon 28 days to revolve the Earth. A blue moon happens on average just under every three years.

The moon revolves our planet in an elliptical orbit, and so on some days it is closer to the Earth than it is on other days. When it is at the closest point and appears bigger in size, the phenomenon is called super moon. This proximity, or perigee, makes the super moon 2018 appear 14 percent bigger than normal and 30 percent brighter. 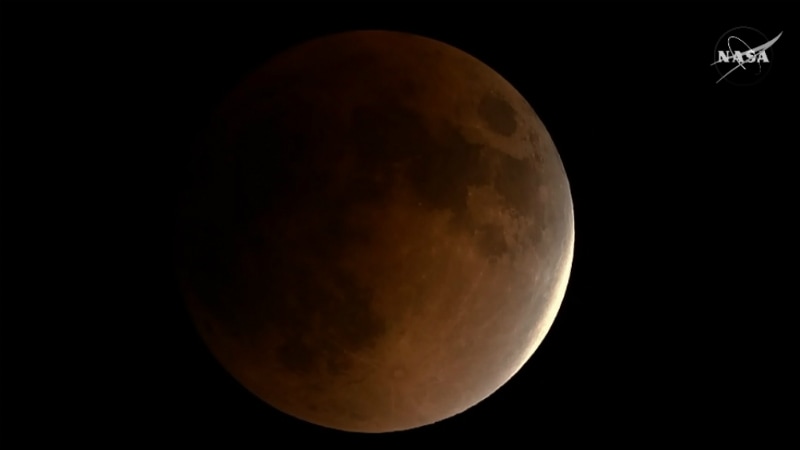 The super blue moon will pass through Earth's shadow to give viewers in the right location a total lunar eclipse. And while the Moon is in the Earth's shadow it will take on a reddish tint, known as a "blood moon," and thus the term super blue blood moon.

The reddish tint -- or blood moon -- happens due to "the effect of all the sunrises and sunsets all around the planet reflecting off the moon", said NASA astrophysicist Michelle Thaller. Sunrises and sunsets appear pink, red and orange because of the long distance light must travel, causing light waves to bounce in different ways, explained Thaller.

Those interested in watching the super blue blood moon in India can start observing the event at 5:53:54pm IST, when the partial eclipse begins, according to the Nehru Planetarium website. The total eclipse will start at 6:21:47pm IST, and the maximum eclipse will be observable at 6:59:49.6pm IST. The complete event ends at 9:38:27pm IST.

Brian Rachford, Associate Professor of Physics at the Embry-Riddle Aeronautical University, says, "One of the great things about a lunar eclipse is you also don't need any special equipment to see it. Anyone can go outside and look at the moon."

Super blue blood moon viewing events are also being held in various cities in India, including New Delhi, Chennai, Ludhiana, Meerut, Surat, Sariska, and Shimoga. Those who want the watch the event online can watch the live stream by NASA by playing the video below:

As mentioned previously, the lunar event will also be seen in parts of Australia and North America. However, it will not be visible in much of Europe, Africa and South America.

If you miss this one, the next super blue blood moon will happen on December 31, 2028, though it won't be quite as large since the moon will not be at its closest point to Earth. Another will happen on January 31, 2037, a total of 17 hours before perigee.

Super Blue Blood Moon 2018: What Is It, and When and Where to Watch It in India
Comment