What Is a Black Hole? Searching for What Can't Be Seen 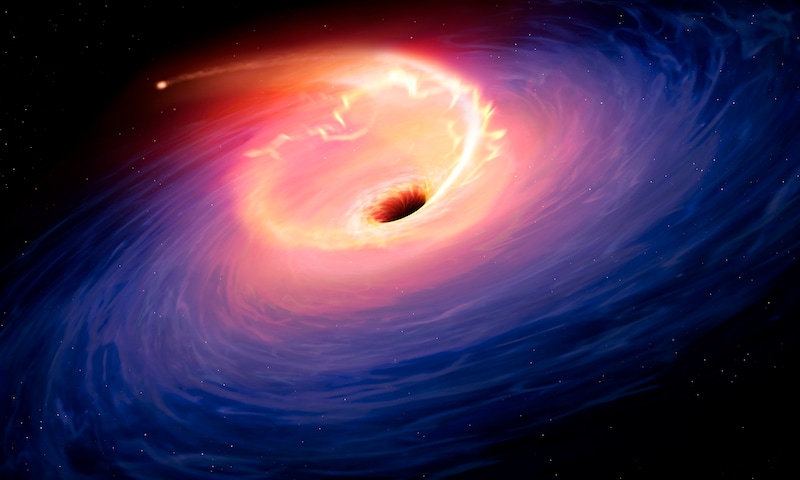 Massive, ravenous, powerful beyond measure -– physicists are convinced that black holes exist, even if no one has directly observed one.

But that's about to change.

On Wednesday, scientists in six cities on three continents are poised to simultaneously unveil the first picture of these enigmatic giants, pieced together from data collected by a global network of radio telescopes.

A black hole is a celestial object that compresses a huge mass into an extremely small space.

If the same were to happen to Earth, our planet would fit inside a thimble or a water bottle cap. The Sun would only be six kilometres (a few miles) in diameter, Guy Perrin, an astronomer at the Paris-LSL Observatory, told AFP.

According to the laws of general relativity, published a century ago by Albert Einstein, the gravitational pull of these omnivorous monsters is so strong that no object can escape if it comes too close.

That includes stars and the electromagnetic waves - no matter how long or short - they give off, including visible light.

Black holes, in other words, are invisible.

Nor can the gravitational forces they generate be reproduced in a laboratory. If they could, it would swallow the lab and everything around it.

But scientists still know a lot about black holes because of the impact they have.

There are two kinds.

The first are garden-variety black holes that form when the centre of a very big star collapses in on itself, creating a supernova.

These can be up to 20 times more massive than the Sun, but are tiny in space.

Trying to see the one closest to Earth would be like looking for a human cell on the surface of the moon.

So-called supermassive black holes, by contrast, are at least a million times bigger than the Sun.

Point of no return
Scientists have observed these giants at the centre of every large galaxy, including our own, the Milky Way.

Supermassive black holes are thought to have first formed early in the history of the Universe, but their origin story remains a cypher.

The two black holes tracked by the Event Horizon Telescope were both of this type.

Its mass is equivalent to 4.1 million Suns, and its diameter a fifth of the distance between Earth and the Sun.

The other is one of the biggest black holes known to exist -- six billion times more massive than the Sun, and 1,500 times more than Sag A*.

It is located some 50 million light years from our planet, in the heart of a galaxy called M87.

The trade-off of size and distance means that -- from Earth -- both of these black holes would be roughly as easy, or hard, to detect.

Stars that get too close are flattened, shredded and transformed into swirling masses of white-hot gas by the gravitational pulls of these behemoths.

Star debris spinning around the edge of a black hole typically disappears into the darkened centre in a brilliant final flash.

"When a black hole starts to suck in mass -- which forms around it in what we call an accretion disk -- it is this mass that starts to shine," explained Paul McNamara, an astrophysicist at the European Space Agency.

So even if astronomers cannot observe the black hole itself, they see what happens along its border, or event horizon -- also known as the "point of no return".