For people who have diabetes - a growing population in India - or show indicators of the condition, regular and accurate testing of blood sugar levels is a must. That's why there is no shortage of home testing products that can quickly, and accurately measure this so that people can give their doctors the information needed. It's a huge industry with giants like Johnson and Johnson having a range of products in the market, but some believe there's plenty of scope for improvement.

"There are two big problems with the existing devices," says Manu Madhusudanan, the CEO of medical healthcare device maker Cooey. "Firstly, they're battery powered, and what people do is when the battery runs out, they'll often just stop using the device. And the other problem is that the onus is on the user to keep track of all the readings, write them down accurately, and then keep track of everything. It's just not very helpful." Of course, Madhusudanan has a bit of a bias in this case - Cooey is about to launch a new product called the Smart Glucometer that addresses these two issues specifically.

According to Madhusudanan, the company has been working on developing the Smart Glucometer since last year, and while it was originally planned for a December-end 2015 release, issues with manufacturing delayed the launch by six months.

In some ways, the Smart Glucometer is actually pretty similar to existing devices on the market - it's a small gadget that comes with testing strips. A drop of blood placed on the strip triggers a chemical reaction that sends an electrical signal to the glucometer, and generates a reading showing the sugar levels. Such devices have been around for a long time, and are well understood and reliably accurate, though they don't measure up to lab testing. The speed and ease of use make them great tools for showing indicators that can be used by doctors to decide if a lab test is necessary. For people with diabetes and for pre-diabetics, these devices are essential.

Cooey's Smart Glucometer is small, a pocketable device that you can carry everywhere. It connects to your phone using the 3.5mm headphone jack and when you do this, it connects to Cooey's mHealth application. An iOS version is still in the works, but Cooey's app connects to all of the three devices it makes - wirelessly in the case of the smart BP monitor and body fat analyser - so it can provide unified data from all these different health and fitness related devices. 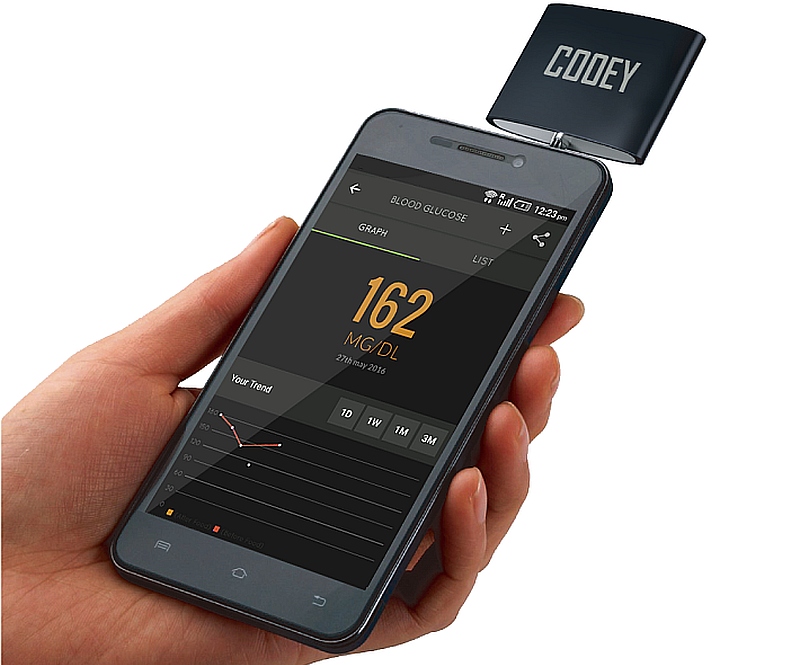 Other than connecting to your phone, Cooey's device works pretty normally - once it's connected, you insert a strip into the Smart Glucometer. Put a drop of blood onto the strip and the reading will be displayed on your phone in seconds. The advantages here are that the Smart Glucometer isn't battery powered, and the data is instantly logged onto the phone.

"Everything is fully automated," says Madhusudanan. "The data is instantly logged, and you can see the history, charts, to track, and there is the option to share this information from within the app, so you can send it to your doctor via WhatsApp, or email if you prefer, which is really useful. There's no chance of a mistake in writing things down, and you always have your phone on you, so there's no chance that you'll forget to carry the logs the next time you go to the doctor."

But is that enough of a reason to pay a pretty hefty premium for this device? According to Madhusudanan, the Smart Glucometer will be priced at Rs. 3,000, which will include 50 testing strips (worth Rs. 1,400) - these strips are single use only, and replacements can be ordered online. The number of strips needed will vary from user to user - some pre-diabetics could need to test their sugar levels only once a month, while people who are insulin dependent might require testing the levels three times a day. But that's the case for all glucometers; however, other devices, which don't log your data, are available for as little as Rs. 600 online. The MRP of those glucometers is still around Rs. 1,600, and given that Cooey's device comes with 50 free strips, the difference isn't so notable when looking at MRP. But that's not a distinction a customer should have to make, and Madhusudanan says that Cooey is working on bringing the price down and hopes that by the end of this year, Coeey will be able to bring the price close to Rs. 1,000.

From what we could tell, there aren't any similar devices on the market in India - there are plenty available internationally, but with shipping these are significantly more expensive than the Cooey. We came across one wireless version as well, but it's much bulkier, and of course, the battery needs to be charged separately. In those regards, the Smart Glucometer appears to be a good solution.

The company is also looking at bringing its three devices into the retail market: "Retail is a big challenge, there's a lot of cost involved in that, so we haven't taken the step till now," says Madhusudanan. "But now that the Smart Glucometer is also ready, we're going to be taking that step. We sold around 300 - 400 units of the other devices so far, but that was with zero marketing. We got funded recently, and we're going to step up the marketing now to build awareness for users next."

Madhusudanan envisions a future where Cooey's smart devices can generate a comprehensive picture about a user's health and issue warnings when any indicators reach worrying levels. "We can see from your phone what your sleep data is like and use that to track your health and issue updates," says Madhusudanan. "We can look at what time you leave home and what time you reach office by looking at your location data, and then we can do something like send you a reminder to drink water during work hours, or send you a reminder to test your blood sugar when you get home."

Further reading: Cooey, Fitness, Glucometer, IoT, Science, Smart Glucometer, Wearables, mHealth
Gopal Sathe Email Gopal
Gopal Sathe is the Editor of Gadgets 360. He has covered technology for 15 years. He has written about data use and privacy, and its use in politics. He has also written extensively about the latest devices, video games, and startups in India. Write to gopal@ndtv.com or get in touch on Twitter through his handle @gopalsathe with tips. More
Facebook Asks Woman Named Isis to Prove Her Identity
Soon, Google Cast Your Chrome Tabs to Hangouts