The Rocks on Mars Suggest It Used to Look Like Earth. What Happened? 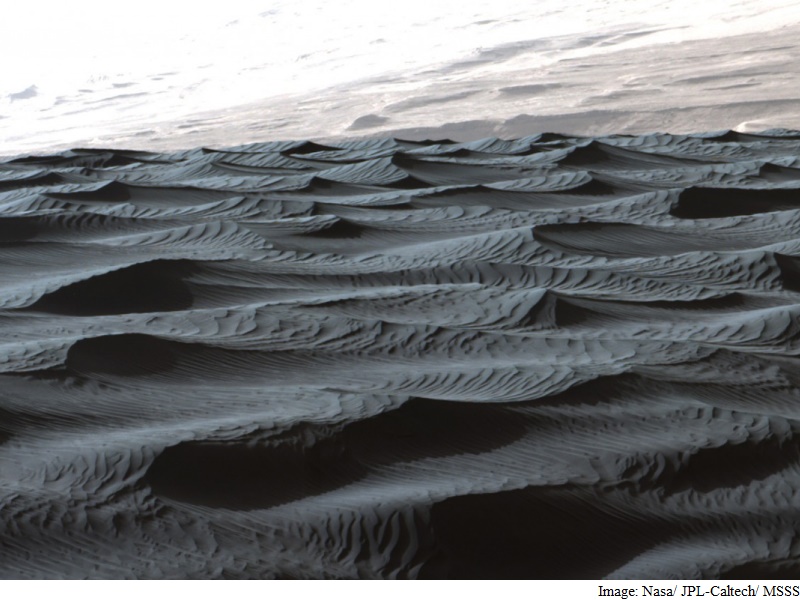 A vast shallow sea shimmered beneath oxygen-rich skies. The rocky crests of cliffs and hills reflected in the still water below. The landscape would have been familiar, except for its eerie desolation; nothing on the entire planet moved but the sands shifting in the wind.

This was Mars, circa maybe 4 billion years ago. Or at least, it's one vision of Mars painted by Nina Lanza, a researcher at Los Alamos National Laboratory in New Mexico. In a study published this week in the journal Geophysical Research Letters, she and her colleagues argue that the discovery of manganese oxide (which forms in wet, oxygen-rich conditions) on the Martian surface suggests that the planet was once much more Earth-like.

Now, of course, Mars is a frozen, barren wasteland, covered in dull red rock that's been bombarded and twisted into strange formations. Another study of the geology of Mars (this one published Thursday in the journal Science) suggests that a particular kind of formation - a ripple in the sand that forms only in Mars' current thin, arid atmosphere - can be found in fossilized form going back 3.7 billion years.

These two studies seem to bracket an important and confusing period in Mars' history: the period when the planet started losing its atmosphere, and thus its ability to hold onto liquid water.

"Really the question again comes back to, 'How fast did it get thin, when did it get thin, and why?'" said planetary scientist Christopher Edwards of the US Geological Survey. These studies "are placing a constraint on that, which is great."

For years now, scientists have been building a body of evidence that Mars looked very different in its distant past. There are features on the Martian surface that can only form in the presence of large bodies water: traces of ancient tsunamis, clays at the bottom of vanished lakes. A 2015 study analyzing the ratios of two types of water molecule on Mars concluded that at one point the planet had an ocean covering 20 percent of its surface.

Lanza's study adds to that body of work. She and her colleagues were analyzing rock data collected by the Curiosity rover when they saw the tell-tale signs of an unexpected compound: manganese oxide. On Earth, that substance is found only in rock layers younger than the first photosynthetic organisms, because it can't be created without oxygen.

Curiosity detects compounds like manganese oxide with its Chem Cam instrument: It uses a laser to vaporize rock, transforming it into a cloud of elements that are glowing at particular wavelengths. A spectrometer inside the instrument "reads" the light, allowing scientists to determine what substances it contains.

The manganese oxide appeared in a context very similar to how it's usually found on Earth: in subterranean deposits left by groundwater that were later exposed as the rock around it eroded. That makes sense, Lanza said, because manganese deposits are "always going to be the result of dissolved igneous rocks in water." She believes that the manganese was dissolved in water that interacted with an oxygen-rich atmosphere, then was deposited as manganese oxide.

"It's sort of mysterious. But it's a very strong indicator of two things: liquid water, lots of it, and a strong oxidant somewhere," Lanza said. "We know that doesn't happen on Mars today, so that opens up the question of, was there actually more oxygen in the atmosphere in Mars' past?"

That's a bold claim, because scientists have no evidence of how Mars could have gotten such an oxygen-rich atmosphere - on Earth, our oxygen came from photosynthesis, and that clearly wasn't happening on Mars. Other geologists suggested Lanza may have overlooked an alternative explanation: another oxidant, perchlorate, could be behind the manganese oxide. (Perchlorate is discussed in Lanza's paper, and the authors conclude that it couldn't have been the oxidant in this case.)

But Lanza said that the oxygen might have been released from Mars' ancient oceans. As its atmosphere got thinner, the increased solar radiation that blasted the planet could have broken apart water molecules into their constituent elements: hydrogen, which would have drifted away, and oxygen.

Exactly why the atmosphere was lost is still a mystery - perhaps it was eroded by solar wind or blown away in a catastrophic asteroid impact. Or maybe Mars, with its low gravity, was simply unable to hold onto it.

Whatever the explanation, the fossilized ripples examined in the Science study offer a potential deadline for that transition.

Mathieu Lapotre, a planetary geologist at CalTech who was the lead author on the study, was studying pictures of modern Mars' dunes taken by Curiosity when he noticed they took a form rarely seen on Earth. In our atmosphere, sand is shaped by wind into centimeter-scale ripples and hundred meter-scale dunes (scientists call these features "bedforms"). But Mars also hosted an intermediate bedform - ripples with wavelengths roughly a meter long.

Analysis of the ripples showed that they can form on the Martian surface because of its thin air; the light atmosphere causes winds to move across the sand differently than they would on Earth.

"That in itself is a cool implication because there is this new alien bedform that does not exist on Earth," Lapotre said.

But it could also inform the discussion about Mars' transition to a dry, airless world. The intermediate-length ripples were found hardened in a rock formation believed to be as old as 3.7 billion years, suggesting that Mars' atmosphere was already thin at that point.

"We're looking at rocks younger than the rocks that the manganese study looked at," Lapotre said. "Those two outcrops probably bracket the decline in atmospheric density."

"This is the period that everyone is trying to understand," said Edwards, who was not involved in either study. What happened on Mars has no parallel on Earth, so it's going to require a lot of analyzing ancient Martian rocks to reconstruct.

"I don't think we have fully worked out the details," Edwards said. "But we're on a path to understanding."