Robots Compete in Fukushima-Inspired US Challenge 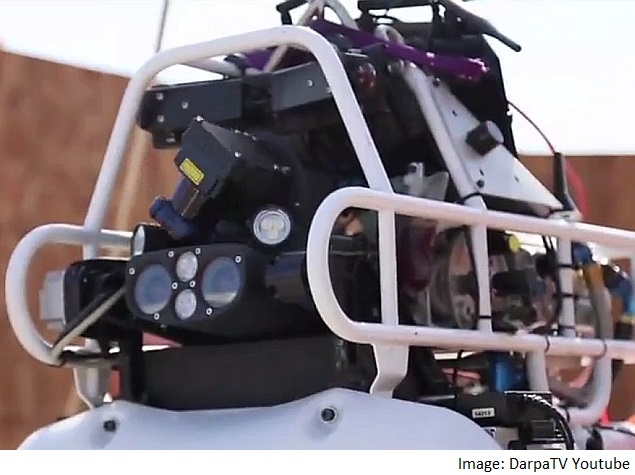 Robots from six countries including the United States, Japan and South Korea went diode-to-diode Friday in a disaster response challenge inspired by the 2011 Fukushima nuclear meltdown.

The winner of the Darpa Robotics Challenge (DRC), to be announced Saturday after a two-day competition in California, will take home $2 million followed by $1 million for the runner-up and $500,000 for third place.

But they will also win the kudos of triumphing after a three-year robotics contest organized by the Defense Advanced Research Projects Agency (Darpa), which commissions advanced research for the US Defense Department.

"The US military has an implicit mission to respond to humanitarian disaster relief. But in order to do so you need the tools to effectively respond," said Darpa official Brad Tousley.

"In many cases you'd like to send robots into the places that it's very dangerous for humans to go into," he told AFP, citing nuclear reactor disasters but also earthquakes and epidemics like Ebola.

In all 24 mostly human-shaped bots and their teams - 12 from the United States, five from Japan, three from South Korea, two from Germany and one each from Italy and Hong Kong - won through to the finals.

The challenges facing them in Pomona, just east of Los Angeles, were designed specifically with Fukushima in mind.

After the March 11, 2011 megaquake and tsunami, a team of plant workers set out to enter the darkened reactor buildings and manually vent accumulated hydrogen.

Unfortunately they had to turn back due to radiation -- and in the days that followed hydrogen built up, fueling explosions that extensively damaged the facility, contaminating the enviromnent and drastically worsening the crisis.

"If the Japanese had had advanced robotics systems that could have used tools that we use in everyday life .. they might have prevented some of the damage from the subsequent hydrogen explosions," said Tousley.

While the robotics teams competing in Pomona are focused on the tasks in hand, they also have their eyes on more than just winning the competition.

"Hong Kong is a financial center .. We hope we can inspire the people with more innovation, to be interested in engineering and technology," said Robert Hung from Hong Kong University.

Maurice Fallon of the Massachusetts Institute of Technology (MIT), said that, while robots can be crucial in disaster response, "the applications outside of this domain are very wide.

"Eventually we hope that the technology that is being demonstrated here will be used in our daily lives, from home help to elderly care to agriculture and construction, there are many applications," he told AFP.

Not yet transformers
But watching the competition in Pomona, it must be said that the technology can appear less than impressive: it takes most robots five minutes to open a door handle, while many of them give up on the task of getting out of a car.

JAXON, the robot from Team NEDO-JSK of the University of Tokyo, is not the only bot to take a tumble, in its case after failing to properly grasp a valve wheel. The felled machine had to be carried away on a stretcher.

They are not exactly Transformers, yet.

"There is a long way to go," admits Tousley. "There's fact and there's fiction. There's a lot of fiction out there that robots are much more capable than they really are.

"But part of Darpa's job is to show the possible, and what we can start to do. And then often other organizations, and other countries or other companies will invest more to bring it along. But it's our job to start that process."