One of the tech veterans at this point, Microsoft has remained an important player over the years even if it doesn't get the same kind of attention that the likes of Apple, Google and Facebook do these days. We know that Microsoft as a company has changed significantly in recent years, and one of the big parts of this is actually something that is intentionally kept apart from the rest of the company – Microsoft Research.

"In engineering, you're looking to solve a problem, you have goals in mind," says Sriram Rajamani, Managing Director at Microsoft Research, India, speaking to Gadgets 360 at the sidelines of a conference in Bengaluru last week. "With research, you're working on things that might have a 20 year timeline. For example, on our team, we have Ravi Kannan, a very gifted scientist, who worked on algorithms as a mathematics problem. He wasn't looking at applying it, he was just interested in it as a mathematical problem. But today, the algorithm that he developed is so important for search engines."

"It's work that has been going on for two decades. What we're doing right now is again for the next two decades," he adds.

Microsoft Research was, for example, where one of the most interesting new products from Microsoft in recent times - Skype Translator – was born. "We had one team that was working on speech to text as a research project," explains Rajamani. "We had another team that was looking at text translation. And a third team was studying text to speech." When all three projects were being developed, Microsoft Research thought to combine them together.

However, Microsoft Research operates in parallel to the rest of the company, and so it might not have made it to consumers if it wasn't for an intervention by the then newly-named CEO, Satya Nadella. As a story we've told earlier goes, Nadella happened to see this technology in an internal demo, and was impressed enough to ask for it to be incorporated into Skype.

Now, Rajamani says, the team is working on multilingual processing (understanding Hinglish, for example), which he says India is an ideal location for working on because of the multilingual landscape – he then shows a demo where someone writes in a mixture of English and Dutch, and the algorithm correctly identifies both languages in the sentence. 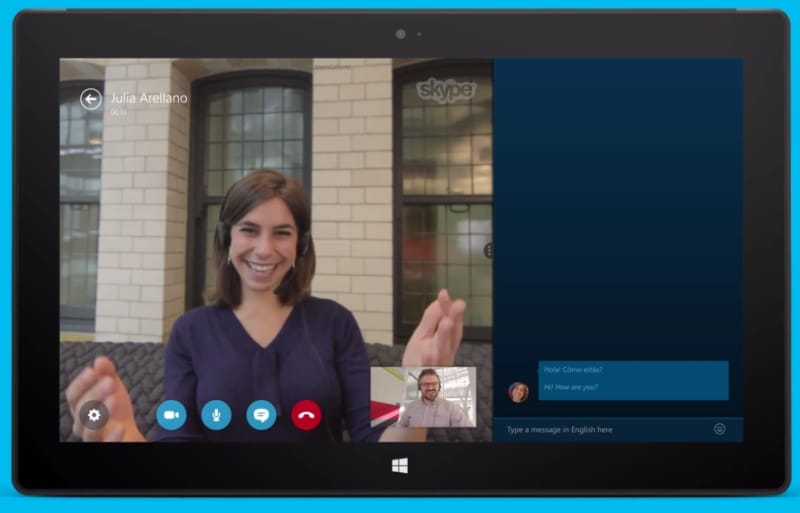 According to Rajamani, Microsoft Research acts as a global organisation, and doesn't have region specific goals. India is the exception, where its ambit extends beyond research, and also to promoting education in computer sciences in India, supporting PhD fellowships, running programs to familiarise graduate students with research, and publishing peer reviewed documents as an open centre. It also does some research related to emerging markets, such as a research project called 99Dots, where it is tracking whether or not people actually use TB medication, via a variety of tools including biometrics, missed calls, and so on, to prevent the spread of the disease.

He suggests - half-jokingly - that having its staff also serve as teaching faculty in universities, and as supervisors for PhD students, Microsoft Research acts as an early warning network for the rest of Microsoft, to hear about the latest developments in science and technology at very early stages.

In India, Microsoft Research is working on a number of interesting projects. Rajamani gives the example of one that could help improve traffic safety.

"We used our own fleet of cars, we have cars that are used for the staff, and in all of those, we fitted a smartphone, so that gives us one camera on the driver, and one camera on the road, of what he is seeing," says Rajamani. "Based on this, we can gather data and analyse it from our full fleet of cars. We can use it for a lot of things, we can measure speed variations, or detect license plates, which could be important for law and order." 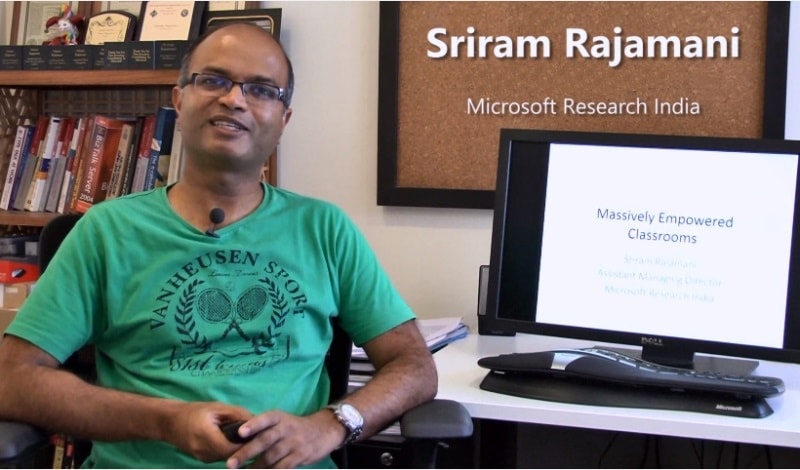 Showing a demonstration of the data being gathered, Rajamani shows how image recognition can pick up things like a driver talking on the phone across several hours of footage. Manually finding such things would be next to impossible, but as Rajamani explains, with machine learning and big data analysis, the software can flag such things for manual review, leading to better enforcement of traffic rules, for example.

Another example includes flying drones over farms to help predict when a farmer should plant seeds, and what other specific interventions the crop requires. Microsoft is already running a similar program using satellite data for the Government of Andhra Pradesh, but Rajamani says that this research project allows for far more localised inputs and predictions. In India, the team is also looking at low cost options – in Bengaluru, the researchers attached sensors to helium filled balloons, tied to tractors, in order to gather the data.

Yet, as Rajamani reiterates, these are all long term projects. One of his colleagues is looking at a way of using DNA to store data, and another is working on quantum computing, he tells us very excitedly. Someone else asks him what the output of Microsoft Research in the last two months has been, and Rajamani looks genuinely nonplussed, before explaining again that as a research organisation, it doesn't work on a month by month, quarter by quarter, deadline to products. "That's why a research lab is so important, you can take risks and try things just to learn more," he says.

But it does raise the important question of how some of these great ideas can come to life. After all, not every project is going to be lucky enough to catch the CEO's eye the way Skype Translator was. That's where Microsoft R&D, and its product engineers, step into the picture.

According to Anil Bhansali, Managing Director, Microsoft India (R&D), the product teams can and do come across the work of Microsoft Research and pick up on it to actually build things. Microsoft Research does not think about the commercial application of its research, but R&D, Bhansali explains, focuses on how research can be applied.

"Sometimes we can also work with research to have ideas seeded, it works in the opposite direction too," explains Bhansali.

Microsoft Research also makes regular presentations to its product teams, Rajamani adds, and says that when a research project is being turned into a product, the researchers will sometimes be temporarily reassigned to Microsoft before coming back to research. "Also, all our work is published in peer reviewed papers," he adds, "so sometimes what will happen is that Microsoft Research does some work that is published in a journal, and someone from Microsoft who is working to solve a problem might find our work through a third party, and say, we should use this in our product."

Further reading: Microsoft, Microsoft Researchers, Microsoft Research India, Quantum computing, Biomolecular computing
Gopal Sathe Email Gopal
Gopal Sathe is the Editor of Gadgets 360. He has covered technology for 15 years. He has written about data use and privacy, and its use in politics. He has also written extensively about the latest devices, video games, and startups in India. Write to gopal@ndtv.com or get in touch on Twitter through his handle @gopalsathe with tips. More
Mitashi Launches New Range of Smart 4K LED TVs Starting Rs. 67,990