Weeks after announcing that it has discovered planets in a distant solar system that could host life, NASA made another major announcement on Thursday – life beyond Earth can be supported in our own solar system, on the moons of Saturn and Jupiter. According to NASA researchers, Jupiter’s fourth-largest moon Europa and Saturn’s sixth-largest moon Enceladus have the potential to play host to life as we know it, as they may have the necessary ingredients required.

The findings come courtesy the Cassini-Huygens unmanned spacecraft and the Hubble Telescope. Cassini-Huygens was sent in 1997 to study Saturn, its rings, and its moon; while the Huygens lander was sent to the surface of Saturn’s moon Titan, the Cassini craft continued its journey to the planet’s rings and moons. Entering the Saturn orbit in 2004, the spacecraft has sent back a lot of data over the past 13 years to Earth, but the findings related to Enceladus might be the most important as they suggest the possibility of life on the small moon. The Hubble Telescope, on the other hand, has spotted plumes that may suggest liquid water on Europa.

The three key ingredients of life as we know are liquid water, a source of energy for metabolism, and chemicals such as carbon, hydrogen, nitrogen, oxygen, phosphorus, and sulphur. Finding planets and other celestial bodies that have these elements in the right composition has been a challenge, more so in our solar system, but it seems NASA has finally achieved a major milestone in the process of determining if life can exist outside Earth.

Here are 10 things you should know about the new NASA announcement: 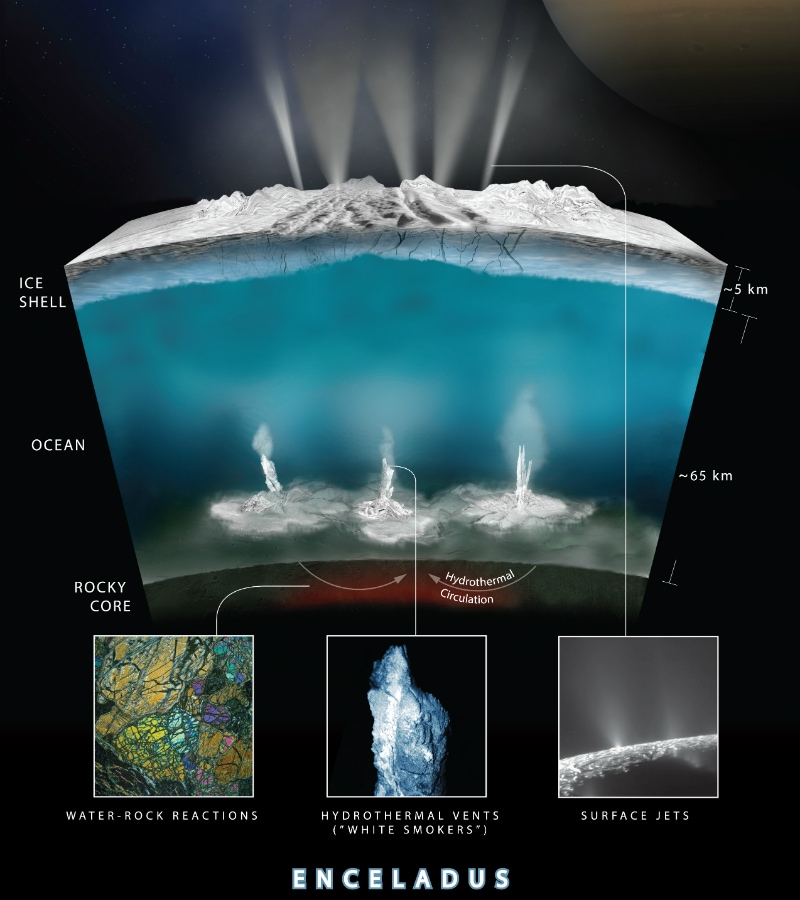 How scientists think water interacts with rock at the bottom of the ocean of Enceladus, producing hydrogen gas
Photo Credit: NASA

With these findings, Enceladus has become the prime candidate for finding life outside Earth, while Europa is another strong contender that requires further exploration.