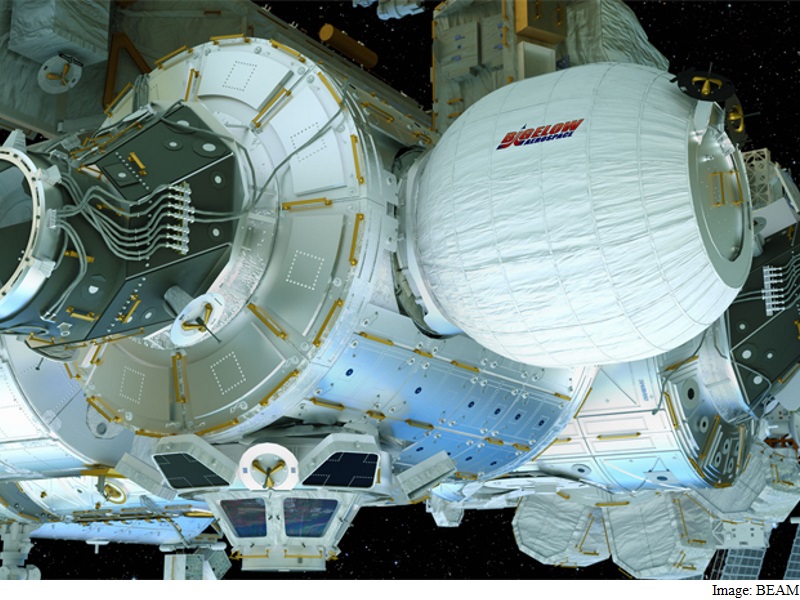 The class of wealthy entrepreneurs who have turned their childhood space passions into emerging companies has been dominated by some of the biggest names in technology and business - Elon Musk, Jeff Bezos, Richard Branson, Paul Allen. But now another wealthy, if lesser known, entrepreneur is about to join them on the public stage, showing off his plans for how humans might finally spread out into the stars to stay.

On Friday, Robert Bigelow, who made millions with his extended stay hotels, is planning to send his expandable space habitat to the International Space Station. Once in orbit, the module will be attached to the station, inflated and then tested over a two-year period to see how it fares against the harsh environment of space. From time to time, the astronauts aboard the station will venture into the bedroom-size pod-the first expandable habitat to be attached to the station, to report on how it fares.

Called the BEAM, the Bigelow Expandable Activity Module, is made of a Kevlar-like material that expands in space once it is filled with air. Bigelow, the founder of Budget Suites of America, said he had invested $290 million (roughly Rs. 1,929 crores) of his fortune into Nevada-based Bigelow Aerospace, which has been working to develop the technology for years.

The habitat is scheduled to be flown to the station by SpaceX, founded by Musk, one of the leaders of what is often called the New Space movement - innovative ventures hoping to democratize space the way commercial aviation has.

"We're hoping this gets us a foot in the door," Bigelow said in an interview this week.

The company has already developed a future model of the habitat, the B330, which is 20 times as big, that it hopes to also test on the space station in preparation for flying them by 2020, Bigelow said.

The company also has been in talks with companies and foreign governments that want to fly their experiments and astronauts to the micro-gravity environment of space, Bigelow said. There is only so much room on the International Space Station, where competition for time and space can sometimes be fierce, he said.

"It's not as though there isn't a demand," he said.

There are six astronauts on the station at any one time. The Russians and Americans get most of the slots, meaning there are many countries whose astronauts fly infrequently.

"How are they going to have a human space program if they fly once every three years?" he said. "That's nothing. We've had a lot of conversations with different countries, and we know they are potentially customers for us."

Nasa is interested in the technology for its deep-space missions as well. The collapsible modules can be packed up tightly so they don't require as much room on a rocket as traditional habitats. That is key, Nasa said in a blog post last year, for manned missions to Mars, where "several rockets filled with cargo and supplies will be deployed to await the crews' arrival."

Inflatable habitats could reduce the number of launches needed for the mission and bring down the cost, Nasa said.

Bigelow said the habitats could be used by astronauts visiting the moon. Once a fleet of the habitats is set up in low-Earth orbit, a space tug vehicle could pull the fleet into lunar orbit to await explorers. The habitats could even land if outfitted with the right equipment, and be used as a lunar base.

But that's years off.

In the meantime, the BEAM is scheduled to stay affixed to the station for two years while beings tested for radiation, temperature and strength against debris swirling through space at 17,500 mph.

The BEAM was supposed to fly to the station last year but was delayed after SpaceX's Falcon 9 rocket exploded.

SpaceX's launch is scheduled for Friday afternoon from Cape Canaveral Air Force Station in Florida. It will be the first flight to resupply the space station with food and supplies since the explosion. SpaceX promises a show of its own after the launch, attempting another landing on a floating platform at sea.

In December, SpaceX successfully landed its booster vertically on a landing pad at Cape Canaveral, but so far has not been able to pull it off on the sea platform it calls an autonomous spaceport drone ship.