Would parents in India buy a companion robot for their child? That's the question that Mumbai-based startup Emotix is trying to answer today, with a bot it has built called Miko. The little robot can talk to children, and play with them, but at Rs. 19,000 it's not exactly cheap. Gadgets 360 went to the Emotix office in Mumbai to meet Miko for ourselves, and get a better understanding of what the company is attempting.

Miko's design reminded us a bit of Eve, the robot from the movie Wall-E. Unlike Eve, Miko obviously can't fly, and gets around with its three wheels instead. The bot has LEDs on its sides, and these glow in different colours depending on what it is doing. If its battery is low, the LEDs glow red, and similarly the colours change to show you when Miko is talking, listening, or dancing.

Miko can talk to children who are at least five years old and it encourages them to speak to it by saying things like, "Ask me something." It will respond to general knowledge questions, and answer queries on basic maths, or do fun things like tell stories or sing a song a song - just prefix your request with "Hey Miko". Miko also tells children not to litter around, among other things. It can even play games such as book cricket with children.

Miko doesn't need Internet for many of these features - it can play a game, or even hold a basic conversation offline, though answering general knowledge questions will of course need it to be online.

Having a companion robot like Miko could seem like a far-fetched idea for people living in India, but the reality is that many parents don't get to spend enough time with their children. Emotix feels that even when the child is alone at home, a robot like Miko could be quite useful. However, that's not necessarily what doctors say. 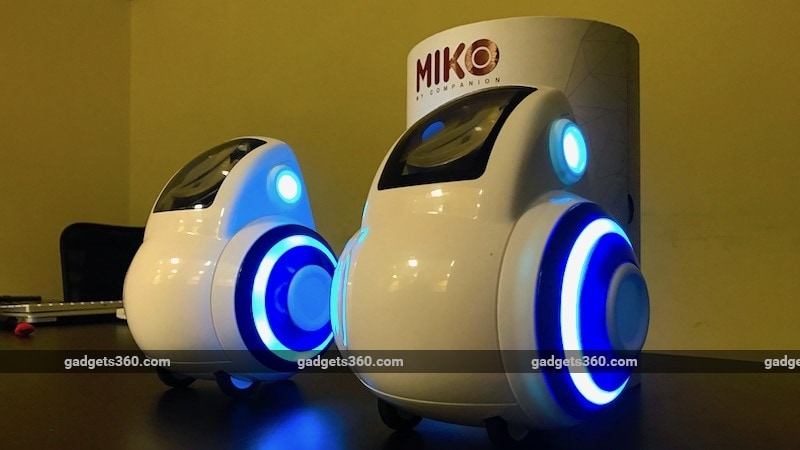 Sadia Saeed Raval, founder and chief psychologist at Mumbai-based Inner Space Counselling Center, says, "We haven't used this robot so I don't want to dismiss it out of hand. Having said that, it's still a machine and it's not a substitute for humans and human interaction." Raval feels that children these days don't spend enough time with people and gadgets like these could lead to them being in a more isolated environment. "It's much better to ask children to spend time in a common space with other children. Even pets are great for children's mental health," she adds.

Even so, this is a space attracting a lot of interest, as we've seen with the launch of Mattel's Aristotle bot, and Lego's robot making toolkit for kids. Mattel's bot is due to ship sometime mid-2017.

These bots could help you do simple things like alert you when a baby starts crying, and be a kid's companion when parents are not at home. For example, Aristotle can read your child bedtime stories, sing lullabies, as well as answer questions. With Miko, Emotix hopes to provide companionship to children, though they recognise that it's not a one-size fits all solution.

Housed in a relatively small office behind a children's school in the southern part of Mumbai, Emotix's premises offer the company an easy way to test its robot. The school is just one of the few places where the company has been testing Miko, according to Sneh Vaswani, one of the co-founders of Emotix. Vaswani is an IIT-Bombay graduate, just like co-founders Prashant Iyengar and Chintan Raikar. The trio has been designing robots since their days in college and Vaswani says they've participated in robotics competitions in India and abroad.

Having worked on Miko for over two years, the company is now ready to ship the first iteration of the robot in February 2017. "In India, a social robot is completely unheard of. We conducted a lot of pilots with consumers and kids (to determine whether Miko has a market in India)," Vaswani tells Gadgets 360. "There was an engineering pilot to decide the engineering architecture of the product. There was an option that we could have a camera on this (robot) and content streamed to a tablet. We could have a mobile phone placed on it and it could have two wheels."

The team ended up scrapping a whole bunch of ideas to arrive at Miko as it exists today. Vaswani says, "We had an AR/ VR headset element to the experience but parents told us they don't want a headset strapped to their child's face." Similarly, parents were vehemently opposed to the idea of having a camera on Miko and voiced their concerns about it making the robot feel like a spy. 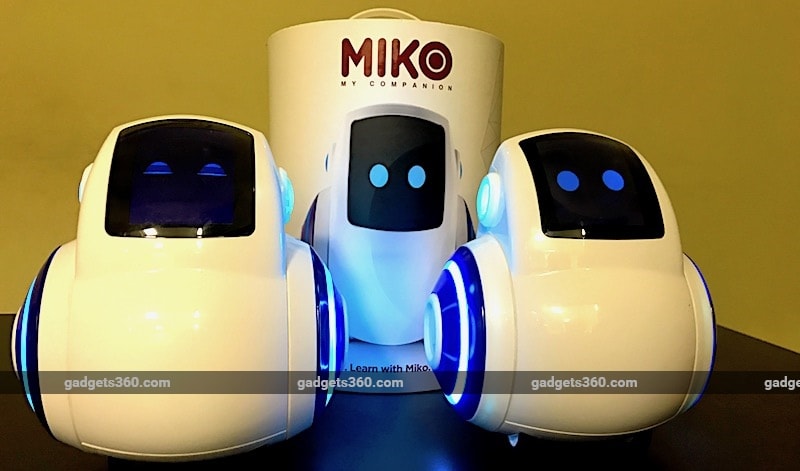 Parents aren't being paranoid here, as there already have been plenty of cases of baby monitors being hacked. Another example of things going wrong with voice assistants is one where Alexa misunderstood a kid and thought he wanted to access some pornographic material. We've also heard about several cases where children used their parents' phones or tablets to run up massive bills via in-app purchases. Plenty of kids don't understand what they're doing with gadgets and that can lead to serious repercussions, so it's important that companies like Emotix keep taking feedback and making changes.

After all of these trials, Emotix finally settled on the current design for Miko. With its three wheels, Miko is designed for moving around on flat surfaces. It doesn't have a drop detection feature so it's best to use it on floors of homes. If Miko bumps into objects or is placed on an uneven surface, it can correct its course or warn you that it needs to be on a flat surface. It has a tiny display that shows several expressions as the robot is talking to children. And the Emotix team has tried to ensure that it has enough personality to keep kids engaged.

For example, when Miko "wakes" (boots) up, it lets out a yawn before introducing itself. When you ask Miko to play a song, it starts to "dance" while pumping out the tune. Its form of dancing is limited by its wheels, so don't expect more than just moving around and rotating as of now. Miko also gets "tired", and announces that it's taking a power nap. This depends on the child's interactions with the robot, so it could take a power nap after a song and dance routine, or right before bedtime.

The catch is that all of this currently works only with English - which is a bit of a problem when you're trying to sell the product in India. With its wide variety of accents and languages, India can be challenging for voice-activated devices.

Emotix says that it's developing voice recognition in two more languages - Hindi and Hinglish - right now, and plans to support more Indian languages in the future. The company has also made a conscious effort to try and give Miko a gender-neutral voice. It also plans to allow children to send commands to Miko via text messages, through the companion app. This, it says, will help introverted children feel comfortable using the bot. The app is still a work in progress, as the team figures out what functionality to include, although this will be finalised before the bots ship next month.

Miko's battery life varies between three to five hours of standby time. Emotix designs the robot in India, but sourcing the parts, and assembly happens in China. In time, the company says it want to manufacture the product in India. The current price of Miko is Rs. 19,000 and it's available for preorders via Emotix's website, with a targeted retail date of February 27.

Further reading: Miko, Robot, Robots, Emotix
Pranay Parab Email Pranay Pranay is in charge of podcasts and videos at Gadgets 360. Over the years, he has written over 500 tutorials on iPhone, Android, Windows, and Mac. He has also written in-depth reported features on the intersection of technology and culture, reviewed fitness wearables, been the social media manager, started two podcasts, and produced several tech videos. He loves travelling, particularly to places not frequented by tourists. He keeps running half-marathons across the country and hopes to complete ...More
WhatsApp's New iPhone Update Adds Ability to Queue Messages Without Internet and More
Android Pattern Locks Can Be Broken Into in Just Five Attempts, Claim Researchers