If a Car Is Going to Self-Drive, It Might as Well Self-Park, Too 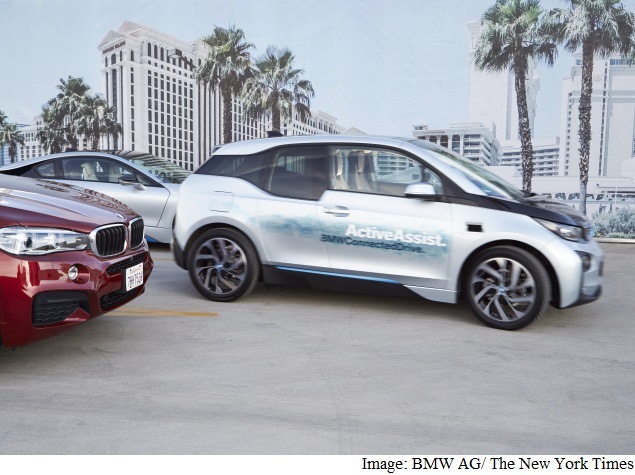 Technology may soon render another skill superfluous: parking a car. Sensors and software promise to free owners from parking angst, turning vehicles into robotic chauffeurs, dropping off drivers and then parking themselves, no human intervention required.

BMW demonstrated such technical prowess this month with a specially equipped BMW i3 at the International CES event. At a multilevel garage of the SLS Las Vegas hotel, a BMW engineer spoke into a Samsung Gear S smartwatch.

"BMW, go park yourself," and off the electric vehicle scurried to an empty parking spot, turning and backing itself perfectly into the open space. To retrieve the car, a tap on the watch and another command, "BMW, pick me up," returned the car to the engineer.

The i3 was equipped with laser scanners, including two mounted in the front right and left quarter panels. No GPS was used. Instead, the car relied on a map of the parking garage and an onboard cellular data connection.

No smartphone was needed. The Samsung watch includes its own cellular connection, so commands are sent to a BMW server, which then relays the instructions to the car, said Yves Pilat, one of BMW's engineers developing the feature. BMW calls it fully automated remote valet parking.

Several other companies have demonstrated similar self-parking cars, including Toyota, Valeo and Volkswagen. In many ways, the development is an extension of existing parallel parking assist technologies. In such systems, the driver remains behind the wheel, but with a push of a button, the vehicle measures the parking space and then swings backs into it without any input from the human operator.

"Now, the concept is you can do any kind of parking spot," Pilat said, and without a driver.

Aside from preventing Ferris Bueller-like joy rides by garage attendants, the advantage of introducing autonomous car features to handle parking has several benefits, foremost being to win over skeptical consumers.

Parallel parking was "the first step in getting drivers to understand that there are some tasks the car might be able to do better than you," said John Hanson, Toyota Motor Sales USA's national manager for advanced technology and business communication.

Letting the company's electronic park assist do the tricky maneuvering can eliminate dings, wrinkled fenders and embarrassing scrapes. But cars that park themselves without a driver in the front seat are still research projects, which may face more regulatory than technological hurdles.

Valeo says consumers will see its self-parking technology introduced in a production vehicle within the next 12 months. To overcome possible regulatory objections, Valeo includes one additional piece of technology: a 360-degree, bird's-eye view video camera.

The live video view is displayed on the owner's smartphone, and the user must keep a finger on the screen until the car is finished parking. If the finger is lifted, the car will stop automatically.

"So the driver remains in control of the operation to conform to current regulations," said Guillaume Devauchelle, Valeo's vice president for innovation and scientific development.

That sense of control may seem like a mere technicality when standing 100 feet away from the car. But not being behind the wheel does have one distinct advantage: There is no trepidation about being trapped inside a robotic car that might crash.

Then there is the matter of simply finding an available spot.

Several companies, like Parkopedia and ParkMe, have been working for the past couple of years to collect that information in real time. There are smartphone apps to help drivers find a spot, and last year Volvo began offering a feature that enables drivers to find the closest available space and pay for it.

Parkopedia has parking information including real-time availability and prices for 6,000 cities in 52 countries, said the company's chief executive, Eugene Tsyrklevich. He said that drivers could even set preferences, like selecting the nearest available spot or least expensive space.

Gathering the information has presented some challenges. Garage owners were initially reluctant to share their pricing information online, but more operators are realizing that if they are not included in apps or on dashboards, they may lose business.

"Right now we have close to 15 percent of all parking lots across the nation with refreshed information," said Mark Pendergrast, director of product management at the traffic firm Inrix. "Two years ago that number was zero."

Inrix uses information from Parkopedia and ParkMe and says that in metropolitan areas the percentage of garages covered is closer to 30 to 40 percent. But there is still the issue of including available street parking. Several municipalities, like San Francisco and Washington, have worked on trying to solve the problem using sensors and networked payment systems to deliver real-time information on availability.

Simply tracking payment information is not enough to guarantee accuracy, however, because some drivers will park illegally or exceed their allotted time. So cameras with software intended to recognize open spaces may have to be used.

Even the cars themselves, peppered with sensors and connected to the Internet, could report on available spots near them, Pendergrast said, much in the way that cars can automatically report their location and speed to provide information about traffic conditions.

Indeed, BMW is working with another company, Parkmobile, and is considering integrating parking location and payment features with its robotic valet in the future. It would mean that drivers would never have to worry about finding a spot or learning how to parallel park.

Such parking nirvana may still be years away, however, said Devauchelle of Valeo. The reason: The real challenge for autonomous car technology isn't pulling into an empty spot in a garage; it's pulling out of a space on the street into traffic.