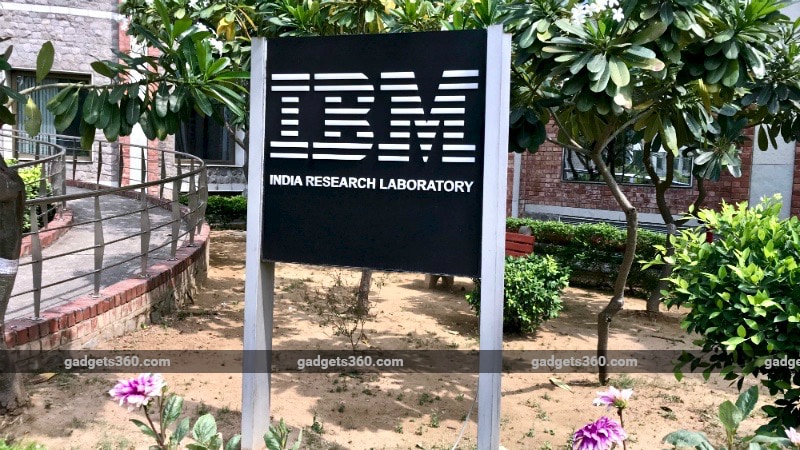 IBM Research Labs is the company's research division and you've probably heard of its most famous work - IBM Watson. With 20 years of research in the bag in India, IBM Research Labs is spreading out its wings and bringing artificial intelligence (AI), Internet of Things (IoT), and blockchain into the fold, and applying these technologies to new and interesting areas.

Bollywood, or for that matter, Hollywood isn't exactly free of gender bias. IBM Research Labs wants to change this by creating an AI-based software that detects stereotypes in movie trailers, movies, and their scripts. The software will analyse the movie's trailer and automatically detect things like the percentage of screen space that is occupied by men and women, and the moods expressed by both genders in the trailer. "Motivation behind the development of this technology is to provide an alternate platform free of biases," an IBM Research Labs spokesperson told Gadgets 360.

The software also takes in text-based content. We saw a brief demo of the software in New Delhi this week, where summary plots of certain Bollywood movies were given as input to the software. It then estimated how substantial the roles of both men and women were in the movie, based on just the brief amount of text. The software also suggests certain revisions to the text in order to remove gender stereotypes. An interesting takeaway from the demo was how the software intelligently analysed movie scripts.

To give an example, it took an entire script and offered contextual suggestions to change gender roles wherever applicable. Suggestions to interchange male and female names in cases of occupations such as doctor, driver, and professor were provided. However, when the software detected - later on in the text - things like giving birth (which are gender-specific), it limited its suggestions based on the physical impossibilities mentioned in the text.

In its testing phase, IBM Research Labs ran movies from 1970 to 2017 to help the system analyse different eras of gender bias. The company says that as humans, bias exists; its aim is not completely eliminating bias in media. It wants to give a better thought process to producers and consumers, to be able to rethink their content, with a better understanding of inherent bias.

Improving agriculture and fashion
IBM is also working towards improving agriculture yield and income with the use of all three technologies - AI, IoT, and blockchain. It has been working with Indian companies such as Mahindra and Mahindra, as well as firms in certain Southeast Asian countries to help improve the state of small farmers (ownership of below 1 hectare) that take up the major part of the population. Using IoT devices like remote sensors along with crowdsourced photos and videos, IBM Research Labs' claims its technology can help predict weather and crop conditions almost a couple of weeks in advance.

The company says that as humans, bias exists; its aim is not completely eliminating bias in media. It wants to give a better thought process to producers and consumers, to be able to rethink their content, with a better understanding of inherent bias.

It also aims to solve the distribution problem by creating a blockchain-based solution. According to the company's approach, farmers will be able to sell their produce to a central hub at current or future rates. In the case of the latter, financiers and buyers can then trade it like an option and speculate on its price till the date it is finally brought into the market. This solution, the company says, creates a sort of mini stock market which keeps demand alive in the agricultural market.

IBM Research Labs also showcased its take on selecting fashion trends with the combination of AI, machine learning, and deep learning. In the demo, the presenter showed how the company's tool makes use of visual search to detect certain patterns and display similar fashion trends across the Internet.

For instance, the presenter selected a photo of Sonam Kapoor from IBM Research Labs' catalogue and ran it through the system. That, in turn, suggested certain product suggestions from partner websites. Users can also use natural phrases - like "show me footwear to wear along with this dress" - and the system will match the clothing to the right pair of shoes as per the ongoing fashion trends.

Currently, during testing, IBM Research Labs has tied up with Vogue and is working with other undisclosed e-commerce players as well, so that something like the demo above could be rolled out as a platform to different sites.

Michael Karasick on the future of AI
We also got a chance to speak with Michael Karasick, Vice President of IBM Research Worldwide, who's played a major role in the development of Watson. Karasick, who was in India to mark the 20th anniversary of IBM Research Labs India, gave us a behind-the-scenes look at how the natural language-based computer has evolved over the years.

"During its development, the question was - can you train a computer to answer questions? Sounds simple although we are still not that good at it," he said. "There was a lot of engineering, clear focus on engineering metrics to measure really how often you think you know the answer compared to how often you get it right."

"The journey we are on is called the journey to Broad AI. It aims to make these systems a little more self-learning and autonomous, [essentially] learn from less data. That's the journey we have been on since forever," he added.

Karasick said that IBM Research Labs is working actively towards improving the cognitive skills of AI-powered system wherein they can automatically tell humans when and how they need help in actions they are capable of handling themselves.

As the Indian government pushes technology-focused campaigns like Digital India and Make In India, IBM Research Labs wants to play a substantial role in the country's dynamic tech environment.

"We have discussions at all levels with the government here. There is some work in agriculture, but nothing is on paper as of now," said Karasick. For that matter, he said, IBM Research Labs has these kind of discussions in every country where the research division does business.

While on the subject of India, Karasick said the country's diversity makes it ideal training ground for AI.

"The ability to package up models and [gather] state-to-state information is valuable," he said. "This is where the talks with the government come in. There has always been a huge appetite to consume technology here (India) and the other thing that has always been true about the concept of technology here is that it should be affordable. That is one of the truisms of working here."

"The most thing to me about this country [India] is the creation of highly educated people; the education system of India is spectacular," he added. "This is a place that has exported smart people all over the planet. Our Director of Research is an IIT graduate. We have a big focus, in IBM Research, on agro business - centred in Brazil and India - and, that includes everything around crop pricing, remote sensing, and satellite analytics, which are really valuable over here."