From Quirky to Revolutionary, CES 2015 Has Them All

Of the tons of products on display, here are a few that inspired, brought a chuckle, or made you just say, hmmm.

Stop or i'll take out my iPad
The gun holsters of old-timey detectives, hidden under an arm and concealed under a coat, have inspired a holder of something else entirely. 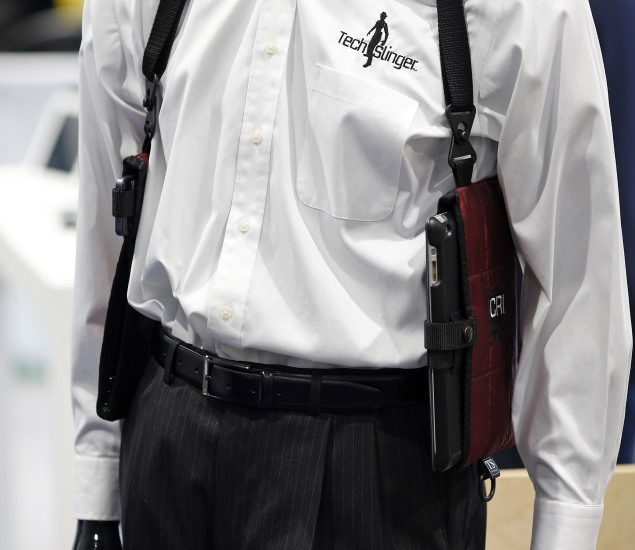 Tech Slinger's holster features a pocket large enough for a tablet on one side and a smartphone and accessories on the other. When worn, devices hang below each arm. Think of it as a storage device for Inspector Gadget.

The company says the holster will prevent people from leaving their devices in a cab or the seat-back pocket of a plane. The devices stay with you but won't weigh on a shoulder like a backpack or satchel might.

This year, Tech Slinger introduced a new "side order" sling to go around a person's waist - great for restaurant staffers who carry tablets to take orders.

Flatbread fix
The smell of baking flatbread wafted through the air as a Silicon Valley startup demonstrated a robotic kitchen device. 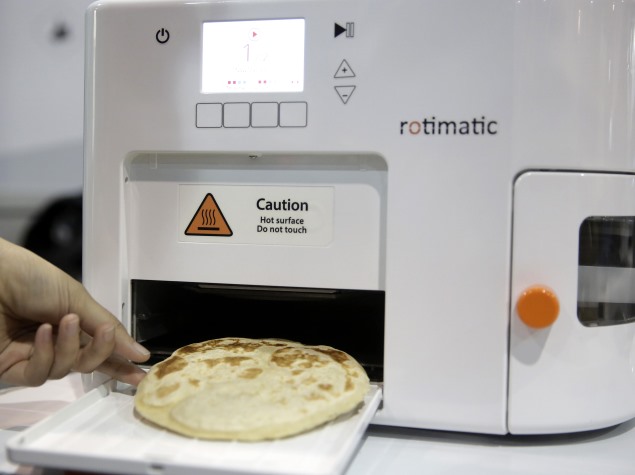 The Rotimatic uses sensors, software and electric motors to make the Indian staple "roti," or unleavened flatbread, at about one per minute - faster than the half-hour or more it takes to mix, knead and cook by hand. Just add flour, water and oil. The Rotimatic measures the ingredients, kneads and flattens the dough. It even adjusts the dough and cooking temperature for any spices or herbs added for variety.

What to pay for something that makes only one kind of bread? $599.

Able to walk again
One touching moment came when Shane Mosko stood up and walked with the aid of a robotic exoskeleton.

Mosko, who has partial leg paralysis from a spinal cord injury, usually needs a wheelchair. The robotic aide from Ekso Bionic now allows him to walk about 500 steps before tiring. The system includes mechanized leg braces, a battery backpack and a walking cane with controls to operate the system. Software and weight sensors are used to adjust the mechanized gait to the ability of each user.

"I think half of what this brings to the table is the psychological aspect of looking people in the eyes," says Mosko. "You don't think about it, but being in a wheelchair, you are down low, you're in your own world."

Ekso cofounder Russ Angold said the Ekso GT has been used by about 3,500 patients recovering from stroke and spinal injuries since it was first sold in 2012.

"It gives you so much hope that spinal cord injuries are going to be a thing of the past someday," says Mosko.

Biker beware
Volvo wants cyclists to know when a car is coming.

In partnership with Ericsson and sports gear maker POC, Volvo demonstrated how its car would get a signal from a nearby cyclist's phone GPS. Meanwhile, the cyclist's helmet would flash a series of lights and vibrate if that person's phone senses that a Volvo is nearby and on a collision course.

Volvo says the connected helmet still needs more testing before it can be sold.

Look segway, no hands
Zipping around as if he were floating, hands in his pockets, Kazar Beilerian of Montebello did effortless circles, literally, around the journalists walking from one press conference to the next.

He was riding his company's IO Hawk. The forward-facing auto-balancing board just needed a little pressure from the toes to start moving.

Leaning forward too much, though, could sometimes send a person backward.

The device costs $1,800 and has a rival: Inventist's Hovertrax.

High-tech sewing
Cameras aren't limited to smartphones anymore. A new sewing machine from Brother has one - and a scanner, too. You can scan a pattern and edit it on the sewing machine's LCD screen. The machine will then embroider the pattern for you (though you can't step away for long, as you need to manually change ribbons of thread to change colors). 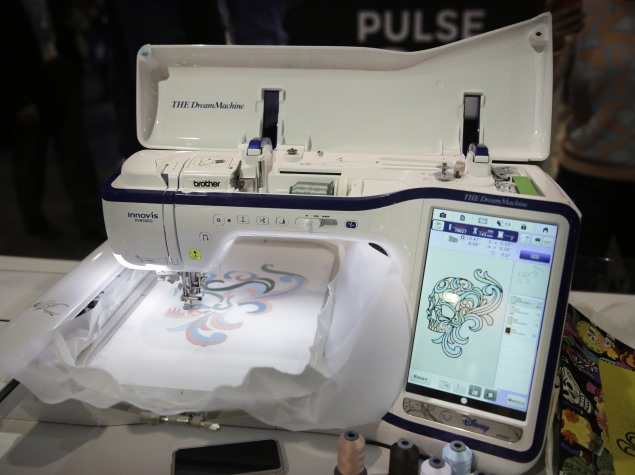 As for that camera? Sorry, it's not for selfies. The camera works with lasers to ensure you're sewing straight.

Illuminated songs
Sony's Symphonic Light Speaker looks like a clear cylinder of glass that surrounds an LED light bulb. The glass itself vibrates imperceptibly to act as a speaker to play music from a smartphone or other device.

"It fills your room with music while obviously lighting up your daily life," says Sony Corp. CEO Kazuo Hirai.

Tomorrow's gadgets
A new smartwatch from Samsung has a glass interface to appear transparent, while a new phone has a hologram interface with fingerprint security. There's also a Bluetooth earpiece with a metallic frame for combat-ready durability.

Where can you buy them? Sorry, they exist only in Hollywood. They were custom-made by Samsung for the upcoming "Avengers" movie from Marvel. Financial terms weren't disclosed.

The props were on display at a private event at CES. There are no current plans to make even fake versions for fans.

From Quirky to Revolutionary, CES 2015 Has Them All
Comment