Black Holes May Finally Be Ready for Their Close-Up 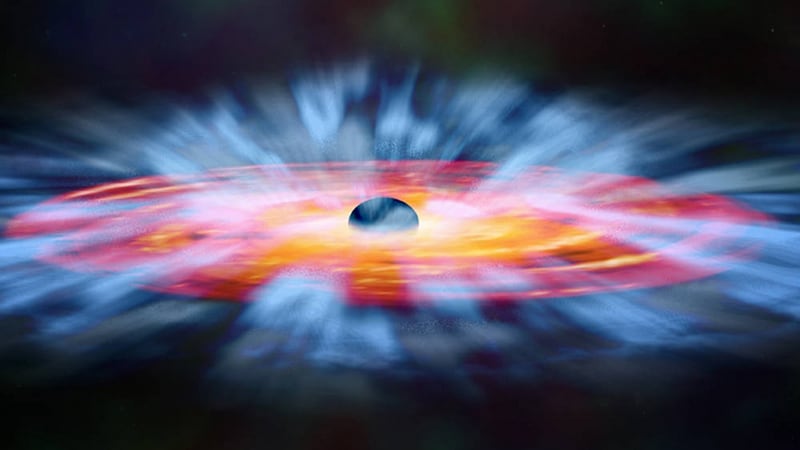 Artist's illustration of a black hole

At precisely 13:00 Universal Time on Wednesday - 9am in the Eastern United States - scientists will hold simultaneous news conferences in Washington, DC, Belgium, Denmark, Chile, Japan, China and Taiwan to reveal the long-awaited results of the Event Horizon Telescope. What everyone is expecting and hoping to see is the first direct image of a black hole.

The Event Horizon Telescope is a network of 10 radio telescopes on four continents that collectively operate like a single instrument nearly the size of the Earth. The scientists behind this mega-telescope boast that their ability to resolve objects in deep space is equivalent to being able to count the dimples on a golf ball in Los Angeles while standing in New York City.

An astronomical photograph of a black hole would represent a tremendous breakthrough for astrophysics and the culmination of a century of theoretical and observational labour. Even a generation or two ago, scientists weren't entirely confident that black holes existed, because even though they looked plausible mathematically the observational evidence was indirect.

Few people have hated the idea of black holes more than the man who helped establish their existence: Albert Einstein. His celebrated general theory of relativity in 1915 described how matter can cause space and time - "spacetime" - to curve, much the way a bowling ball will dimple the surface of a trampoline. Gravity is the effect of that warping of the geometry of the cosmos. Physicists put it this way: "Matter tells space and time to curve. Space and time tell matter to move."

Just months after Einstein's equations were published, a German scientist, Karl Schwarzschild, tweaked Einstein's equations and came up with a disconcerting conclusion. If an object was dense enough, he found, it would eventually punch through the universe's fabric, creating a bottomless pit in spacetime known as a "singularity."

These singularities - named "black holes" in the 1960s - are gravity wells so strong that, once you enter, you can't turn back. The gravitational field of a black hole is so intense that not even light can escape the "event horizon," the point of no return.

Einstein found the notion of a singularity so preposterous that he devoted an entire research paper to debunking it. But as time went on, more and more researchers found more clues that Schwarzschild's wild idea might be real.

The astrophysicist Subrahmanyan Chandrasekhar, an expert on stellar evolution, explained that some stars would collapse catastrophically after they died. Then physicists J. Robert Oppenheimer and Hartland Snyder showed how that collapse could continue until it formed the kind of singularity Schwarzschild had written about.

But stellar-mass black holes, the kind that form from collapsed stars, are not the only black holes in the universe.

In the 1960s and '70s, scientists proposed that some mysteriously bright objects they'd been calling quasars might actually be clouds of swirling, superheated material surrounding black holes hundreds of thousands of times more massive than the sun. As these "supermassive" black holes slurp up gas and stardust, the theory goes, matter outside the event horizon speeds up, and some of it is flung back into the outer reaches of galaxies. X-rays and radio waves accompany these jets of ultrahot gas. Paradoxically, all this activity makes the black holes some of the brightest things in the universe - and obscures the darkness at their cores.

In 1974 researchers at the Green Bank Radio Telescope in West Virginia captured the powerful radio signal from the core of the Milky Way. This was the first observational evidence for the existence of Sagittarius A*, the black hole around which our entire galaxy spins.

Now astrophysicists believe that supermassive black holes lurk in the hearts of all large galaxies. One of the big unknowns is the chicken-and-egg question of what came first - the black hole or the galaxy?

In case you're wondering, black holes are not among the many things that humans should be worried about. They aren't rogue entities on the prowl, looking to devour nice planets. They're not cosmic vacuum cleaners. Still, you wouldn't want to cross the event horizon. That would go badly. If you fell feet-first, the gravitational tug on your feet would be greater than on your head and that tidal force would rip you apart. You'd be, as astrophysicists say, spaghettified.

Rainer Weiss, an emeritus professor of physics at MIT and a Nobel Laureate for the detection of gravitational waves emanating from black hole collisions, explains:

Eventually you would reach the "singularity." That's where, according the physics equations, the curvature of spacetime becomes infinite and all known laws of physics cease to apply.

"At that point, nobody knows what the hell to say about it," Weiss said.

To understand the singularity, Weiss said, "you need to know how to do the quantum theory of gravity."

"We don't have a theory that is the quantum theory of gravity," he said.

Science writers often describe black holes as "monstrous," but they don't really have much personality at all. Indeed, anything that plunges into a black hole is eventually stripped of all identity other than mass, charge and spin. Protons, neutrons, electrons, big metallic atoms, whatever goes in becomes undifferentiated as it reaches the "singularity" at the center of the black hole.

The physicist John Wheeler famously declared that black holes "have no hair," meaning no hairstyle, nothing personal and flashy. The physicist Brian Greene, in his book "The Elegant Universe," notes that this featurelessness of black holes makes them oddly similar to subatomic particles, leading to "the strange speculation that black holes might actually be gigantic elementary particles."

As for what a "singularity" is, no one really knows. You probably can't describe it with spatial coordinates, and neither is there such thing as time in a singularity. In a sense, there's no there there. And nothing really happens.

"It is one of the great mysteries in science right now - what is a black hole?" said Chiara Mingarelli, an astrophysicist at the Flatiron Institute Center for Computational Astrophysics in New York. "What is the singularity? Mathematically we define it as the infinite curvature of spacetime. But that can't possibly be true."

She means that the mathematics may not correspond to the actual reality at the heart of the black hole.

"Mathematically that's the best we can do. And that's fine and that's fair. But if we could actually observe what's at the center of a black hole, a singularity, it's likely a thing," she said.

The famed LIGO experiment - the Laser Interferometer Gravitational-wave Observatory - has successfully picked up the signature, in the form of gravitational waves, of solar-mass black holes merging. In the first detection, the two black holes were estimated at roughly 30 solar masses each. When they merged, about three solar masses of energy dissipated across the universe in the form of the gravitational waves, which LIGO detected.

The Event Horizon Telescope has looked at two supermassive black holes: Sag A and the one in M87 (for Messier 87, named for the astronomer who catalogued galaxies in the night sky before anyone knew exactly what a galaxy was). M87 is a truly enormous elliptical galaxy in the constellation Virgo. Whereas the Milky Way's central black hole has a mass equal to 4.3 million suns (or "solar masses"), the black hole in M87 is more like 6 billion solar masses - billion with a b. M87 is remarkable for producing a dramatic jet of particles streaming some 5,000 light years into intergalactic space.

So the announcement Wednesday could reveal an image of the Milky Way's supermassive black hole, or M87's, or both. The black hole may reveal itself in silhouette, or as a shadow of sorts.

Astrophysicists are hoping the results provide insight into Einstein's general theory of relativity. The image may show how the black hole distorts space around it, including bending light from behind the black hole so that we can see it from Earth - a gravitational lensing effect.

"It's like being able to see the back of your head," said Priyamvada Natarajan, an astrophysicist at Yale University.

"We've often used models and simulations and kind of theorized about black holes and especially about the event horizon. To get some kind of observation on it, the silhouette, would be really really amazing," she said. "It's a way we get legitimation for the process whereby we figure stuff out in science."

In other words: Theories are great, but seeing is believing.