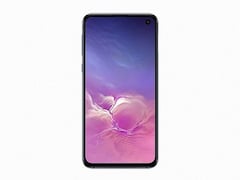 For the past couple of years, Samsung has typically had two flagship S series smartphones at launch — a regular and a Plus version. This year, the company introduced a third variant called the Galaxy S10e. Going by the US pricing, the Galaxy S10e seems to be aimed directly at the iPhone XR (Review). In India, thanks to Samsung's local manufacturing, we're able to get it closer to the dollar value while the iPhone XR comes in at a steep premium.

Samsung Galaxy S10e smartphone was launched in February 2019. The phone comes with a 5.80-inch touchscreen display at a pixel density of 438 pixels per inch (ppi) and an aspect ratio of 19:9.

Samsung Galaxy S10e is powered by a 1.9GHz octa-core Samsung Exynos 9820 processor. It comes with 6GB of RAM.