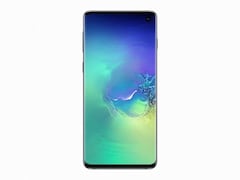 The Samsung Galaxy S10 is the "middle child" in the Galaxy S10 trio that the company has just launched. While the Galaxy S10+ has been recognised as the best that the Galaxy S series has to offer, the smaller Galaxy S10e has also managed to gain popularity thanks to its relatively powerful hardware and reasonable price. The Galaxy S10 then is stuck in the middle, claiming to offer the best of both worlds. Does it really manage to do that, or are you better off with either of its siblings? We put it to the test to find out.

Samsung Galaxy S10 smartphone was launched in February 2019. The phone comes with a 6.10-inch touchscreen display and an aspect ratio of 19:9.

Samsung Galaxy S10 is powered by a 1.9GHz octa-core Samsung Exynos 9820 processor. It comes with 8GB of RAM.