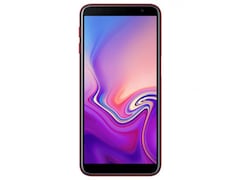 Samsung is making an effort to regain its number one spot in the Indian smartphone market, and is besieged by younger brands including Xiaomi, Oppo, Vivo, and Infinix. At every price point other than the ultra-high-end, its products haven't always offered the specifications that others offer. When it comes to buyers who don't have huge amounts of money to spend, every little feature and bump to the specifications counts as added value.

Xiaomi Redmi 5 Plus
OR