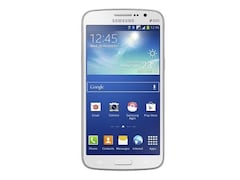 Samsung was one of the first companies to really run with the idea of big-screen phones. Others had tried before and failed, but Samsung managed to turn its original Galaxy Note into a massive success. Big screens have since percolated down to the more budget-oriented phones, but these usually have lower resolutions and weaker processors, negating many of the advantages phones that size. Samsung's own Galaxy Grand was meant to appeal to people who wanted a big screen just for the sake of having a big screen, without paying flagship-level prices.

Samsung Galaxy Grand 2 smartphone was launched in November 2013. The phone comes with a 5.20-inch touchscreen display with a resolution of 720x1280 pixels at a pixel density of 280 pixels per inch (ppi).

Samsung Galaxy Grand 2 is powered by a 1.2GHz quad-core Qualcomm Snapdragon 400 processor. It comes with 1.5GB of RAM.

The Samsung Galaxy Grand 2 runs Android 4.3 and is powered by a 2600mAh removable battery.