We Played Assassin's Creed Origins and Wolfenstein 2: Here's What You Need to Know 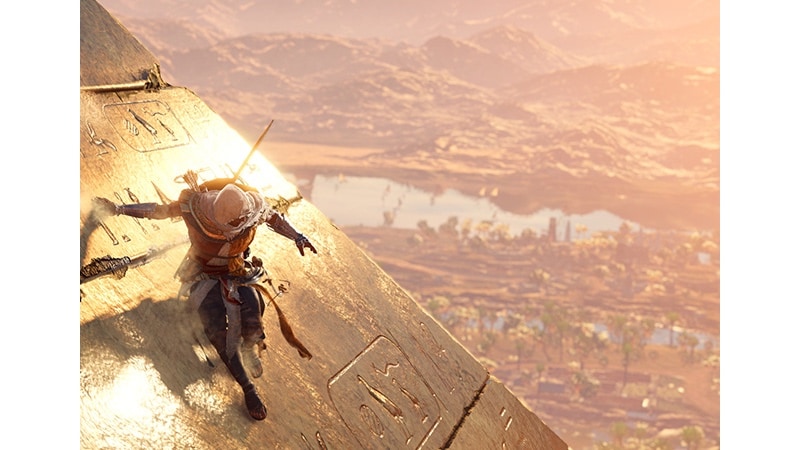 On this episode of Transition, we delve deep into the world of Assassin’s Creed: Origins and, believe it or not, Wolfenstein II: The New Colossus. Since it’s October, there just isn’t any shortage of games to talk about and games editor Rishi Alwani, friend of the podcast Mikhail Madnani, and host Pranay Parab make the most of this opportunity. In the second half of this episode, we talk about Stranger Things season 2 as pop culture nerds Akhil Arora and Roydon Cerejo return to the podcast.

This episode begins with an in-depth look at Assassin’s Creed Origins, which Rishi had the chance to check out. Rishi starts by talking about the polished experience that this game offers. He compares this game with previous games in the Assassin’s Creed franchise, while detailing changes to gameplay and combat in particular. There’s a lot that has changed in this game, so Rishi does a great job explaining how the game has evolved and what it might have learned from For Honor.

Then both Mikhail and Rishi talk about Wolfenstein II: The New Colossus, which both of them managed to play for quite a few hours before we recorded this podcast. This is where both detail the history of the Wolfenstein franchise and whether this game is a worthy entry to the franchise. The discussion goes to the tech behind the game, its graphics and visuals, and just how gory this game is.

Then we discuss fun topics such as original Xbox games coming to the Xbox One, EA’s rather sad development priorities, sales figures of recently released AAA games such as NBA 2K18, Mario + Rabbids: Kingdom Battle, Gran Turismo Sport, and Destiny 2. Finally, we talk about Nintendo’s impending announcement around Animal Crossing’s release on mobile. We conclude the gaming section of Transition by talking about the games we’ve been playing this week, which includes Assassin’s Creed: Origins, Wolfenstein II: The New Colossus, Age of Empires II: HD, Yomawari Midnight Shadows, and Stardew Valley.

That is when the pop culture segment of Transition begins, and we discuss Stranger Things season 2. This is where Akhil first gives us an idea about what makes Stranger Things special and why people should watch it. Then Roydon comments on the nature of Stranger Things and how it’s more of a movie than a TV show. Then we talk about Netflix and why it’s perfect for Stranger Things, how the show progresses through the course of the season, and our favourite parts of the second season.