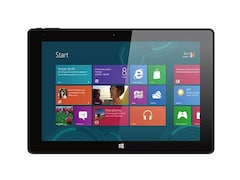 Pantel Penta T-Pad WS1001Q is based on Windows 10 and packs 32GB of inbuilt storage (up to 256GB). It was launched in Black colour.