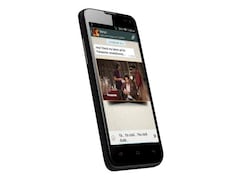 Panasonic T41 smartphone was launched in July 2014. The phone comes with a 4.50-inch touchscreen display with a resolution of 480x854 pixels.

Panasonic T41 is powered by a 1.3GHz quad-core processor. It comes with 512MB of RAM.

Panasonic T41 based on Android 4.4.2 and packs 4GB of inbuilt storage that can be expanded via microSD card (up to 32GB). The Panasonic T41 is a dual-SIM (GSM and GSM) smartphone that accepts Micro-SIM and Micro-SIM cards.

Panasonic T41 price in India starts from ₹ 4,470. The lowest price of Panasonic T41 is ₹ 4,470 at Amazon, and is available in Black, Pearl White, and Red colours.