That's because there's a desk out there that tells you to do exactly that.

The Stir Kinetic is probably the world's first "smart" desk. It has a built-in touch screen, so you can see this either as a desk with a smartphone in it or a smartphone with a desk attached.

The other reason the desk needs smarts is that you don't have them. Well, not you, in particular, but people like you. Apparently we know that sitting all day is not good for us, but when we get motorized desks, we don't use them very much.

"Users were, in general, positive to the worktables, but showed poor compliance in using them," as some Swedish researchers put it in 2005.

Stir was founded by a former Apple engineer, making it sort of like the Nest thermostat of desks. Both are everyday objects imbued with top-notch software. The Nest figures out when you're home and varies the temperature accordingly; the Stir desk knows if you're in front of it.

The Stir knows if it's at the standing or sitting level and keeps track of how long you've been in that position. After 20 minutes or whatever interval you select, it will tell you to switch positions. It does so by "breathing" - it gently moves up an inch, then settles down. Nothing further happens unless you tap the touch screen twice to confirm you want to change positions.

You can buy a "dumb" motorized standing desk for $1,500. There are also some nifty designs with mechanical counterbalances for the same price. There was even a Kickstarter crowd funding campaign offering a bare-bones motorized table for $369. 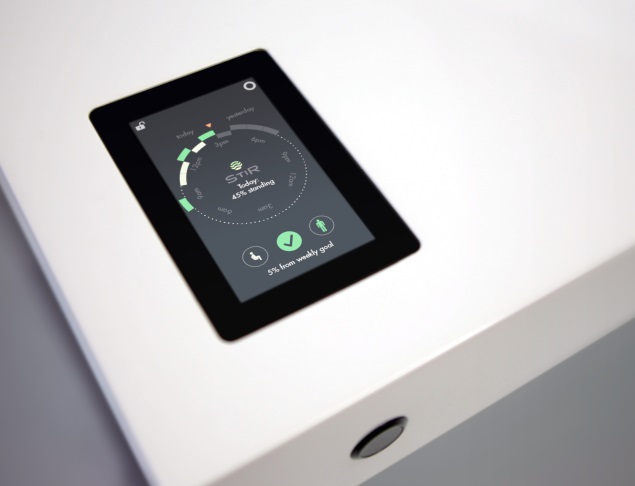 The Stir Kinetic costs $3,890, plus tax and $299 for shipping. So if you disregard the other qualities of the desk (and the white-glove delivery service), you're paying more than $2,000 for its smarts, which do the same thing as any number of free timer apps.

A standing desk isn't going to do you any good on its own, says Alan Hedge, a professor of ergonomics at Cornell University. What helps is moving around a lot and switching positions.

"If you're sitting in a static posture or standing in a static posture, that's not particularly helpful, because muscles fatigue very quickly and the circulatory system is not being helped," Hedge says. "When you're moving around ... it activates what's called the muscle pump that helps to return blood back to the heart."

So the $2,000 question here is whether you have the willpower and presence of mind to do that without a smart desk reminding you and helping you track your behavior.

I used the Stir for a week, and the benefits of the sit-stand regime were pretty obvious. I felt more alert at work and less tired at the end of each day. I'm less sure about the benefit of the reminders. They tended to come at the wrong times. Bloated with lunch, I didn't want to stand up. When on a roll, I didn't want to sit down.

The Stir is supposed to learn your habits, much like the Nest. But it takes four weeks for it to get your measure and start to use that knowledge to time its prompts. As I had it for only a week, I couldn't test this feature.

I was, of course, popular in the office that week. Everyone came by to look at the fancy new desk with its shiny, Apple-like white acrylic top. I was happy to demonstrate its features, which include USB and traditional AC power outlets hidden under lids. There's plenty of space to hide your laptop power brick under these lids, too.

Through the touch screen, you can connect the desk to Wi-Fi so it can download software updates. If you use a Fitbit exercise band, you can also have it send your standing times to Fitbit.com, which computes how many calories you've used that way. 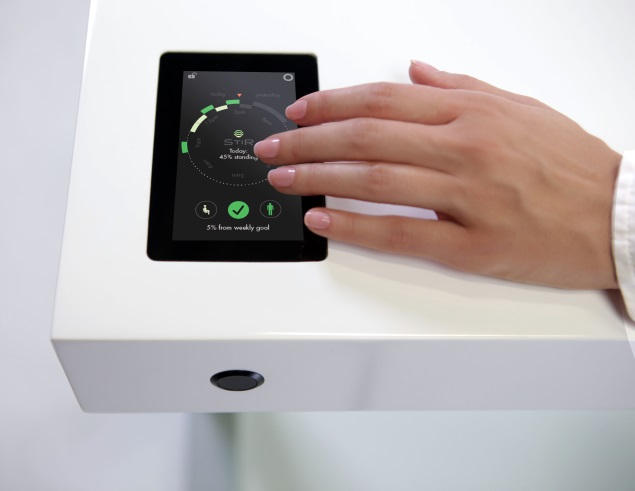 All in all, it was a very pleasant experience. The worst I can say is that the touch screen is fairly sensitive and reacts not just to finger touches, but also to random objects landing on it. If a book, phone or pen edges on to the screen, it can start the desk surface moving. The company says it shouldn't be happening.

My remedy was to lock the screen by swiping down. This adds the extra step of unlocking it when you want to change positions.

But the question remains in my mind: Would I feel just as good with a $1,500 sit-stand desk that doesn't remind me to move?

If money is no object, by all means get the Stir. But there's quite a bit happening in the world of sit-stand desks, as evidenced by the recent Kickstarter campaign. It wouldn't surprise me if desks that are cheaper, but just as capable, are just around the corner.

product Stir was founded by a former Apple engineer, making it sort of like the Nest thermostat of desks. Both are everyday objects imbued with top-notch software.